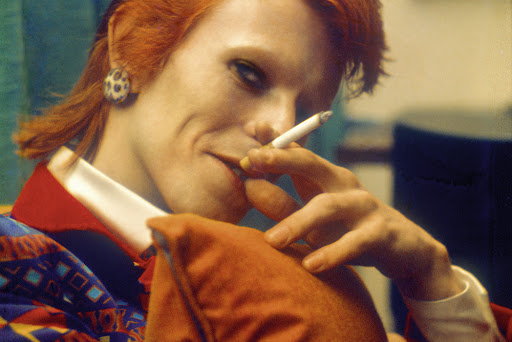 I’m going to shame myself and admit I don’t own a single David Bowie album. In that very same breath, however, I also must say I have IMMENSE respect for everything the man has done for rock-n-roll. The theatrics, the androgyny, the futuristic musical/artistic concepts and personas were ALL ahead of their time.

It may be hard to remember in today’s post-Marilyn Manson musical freakscape, but I dare you to look back at Bowie’s 1970s concert footage and tell me his flaming orange mullet, glitter makeup, platform shoes and feather boas were anything less than outrageously shocking. Go ahead, I double-dare you!

Obviously, it was a thrill for me to speak by phone to such rock-n-roll royalty in 1995 as Bowie had just released his “Outside” album and paired up with a white-hot (and highly indebted) Nine Inch Nails for a tour that landed Bowie in front of a new, younger audience. As an interesting side note, Bowie’s sophisticated vocabulary has no room for such typical rock-speak as “dude,” “whoa” or “like.”

Trent Reznor’s Nine Inch Nails may have sold the bulk of the concert tickets on this particular tour, but it was Bowie who sent everyone home with a history lesson in the origins of industrial, sci-fi rock. Calling from a tour stop in Atlanta, the Thin White Duke ch-ch-ch-chatted about the following:

On touring with Nine Inch Nails:
“God, I’m loving it! I liked a lot of what Trent was doing musically and I like the quantum leap from (NIN’s) ‘Pretty Hate Machine’ to ‘The Downward Spiral.’ I thought it was very convincing in terms of his abilities as a writer and producer. He’s really going places.”

On sharing the stage with Reznor during the tour:
“I think it’s one of the best parts of the show. I think it surprises everybody when they see how well the two sides gel together and find common ground. We chose each other’s songs we’d like to do. He chose ‘Scary Monsters,’ ‘Spaceboy’ and ‘Subterraneans,’ and I came up with ‘Reptile’ and ‘Hurt.'”

On choosing to delete many of his hits on the 1997 tour:
“I couldn’t abide the idea of doing a big-hits tour. If I’m just walking through something, there’s absolutely no satisfaction. I’d rather not tour. I’d rather be making new music or painting.”