Besides being one of heavy metal’s most iconic Hall of Fame singers, Rob Halford also has an impressive track record as being a fantastic interview. He’s gracious, insightful, funny and quite willing to openly talk about most anything, which we’ve basically done on a few occasions over the years. Oh yeah, I also must admit to getting a kick out of the way he calls me “Die-vid” and “Dive” in that oh-so-familiar British accent.

The following is another standout conversation with  the Metal God himself — this one appearing in the Houston Press (under the headline “Turbo Lovers”) ahead of Judas Priest’s 2011 Epitaph concert tour that rightfully had fans worried it could be the last.

Calling from a tour stop in Chile, Rob Halford admits his world-famous pipes are plagued by a bit of a drip.

“It’s one of the perils of road work,” sniffs the multi-octave Judas Priest singer. “It’s so easy to pick up a cold or flu as you’re progressing around the world. It would be interesting if they put us all in laboratories, because bands and crew probably have the weirdest immune systems in the universe.”

They also have an oddball list of other occupational hazards. For the 60-year-old Halford, the stage is all the more perilous each night when he revs up his trademark Harley-Davidson to challenge the roar of Priest’s heavy metal.

“Let’s face it,” he says with a laugh. “If I did what I do on stage out in the middle of the street, I’d get locked up. I’m still falling off my Harley-Davidson as you probably saw [on the Internet] the other night. They took the keys from me one more time [laughs].” 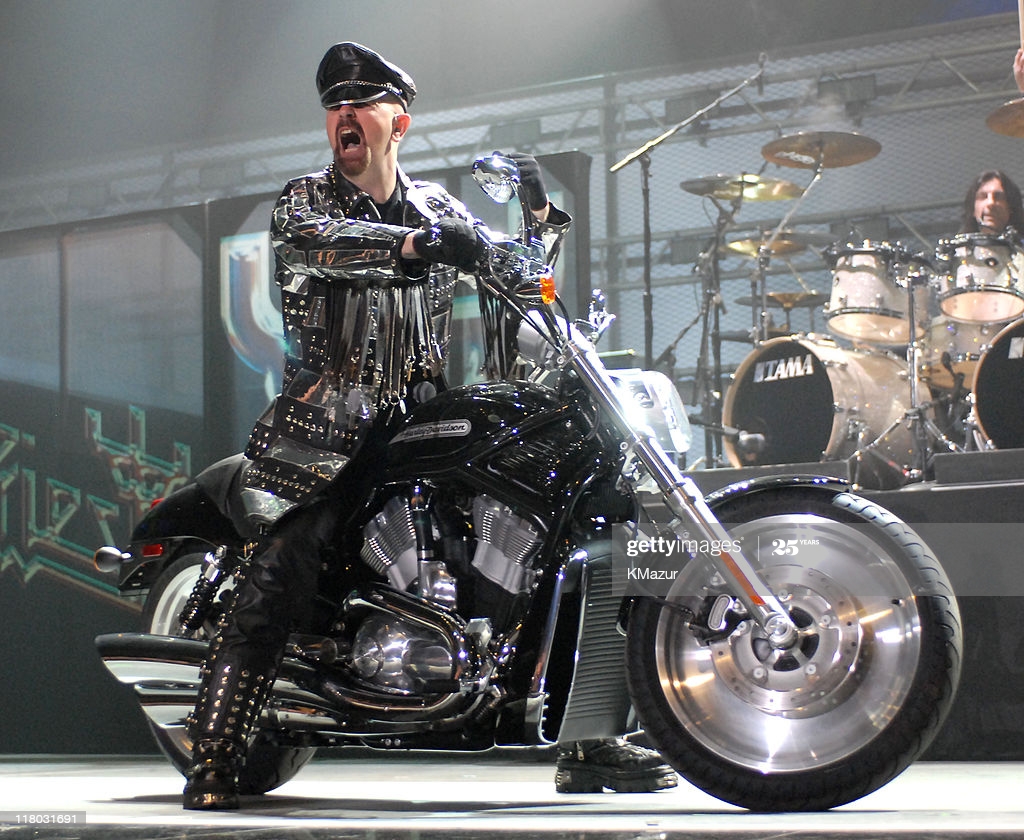 ROCK HARD, RIDE FREE: Halford astride his trademark Harley in 2006. As he readily admits, the roaring mechanical beast is not without its pitfalls. (Photo by KMazur/WireImage for VH-1 Channel – New York)

“Quite honestly, we were overwhelmed with the reaction when we put out the fact that this was going to be a farewell tour,” he says, clarifying that Priest will release a new album next year, but scale back future touring.

“It was a very emotional kind of feedback,” he adds. “I don’t think any of us is fully aware of how deeply the emotional contact can be with the music you make, especially on the level of Judas Priest. We will continue, but in a different way.”

The most immediate difference is the absence of founding guitarist Kenneth “KK” Downing. A fan favorite since the beginning, Downing abruptly left the band earlier this year due to ongoing squabbles with management.

“I haven’t spoken to Ken in a very, very long time,” Halford says. “That’s the other thing with bands: When we do take a break, there’s so very little interaction, because to a certain level, this is work.

“When you walk away from work, you just want to decompress and try to get away from it all,” he explains. “I can’t honestly remember the last time I spoke to Ken. It’s got to be at least a year or so. I’d love to give you an exclusive, but there really isn’t much more to share.”

Formed in Birmingham, England, in 1969, Judas Priest originally was fronted by singer Al Atkins. By the time the band secured a recording contract circa 1973, bassist Ian Hill’s girlfriend recommended her brother, Rob, as Priest’s new singer. With Halford’s soaring vocals complementing the blazing dual guitars, Priest literally and musically evolved from a blues-based band into the quintessential heavy-metal outfit.

“We are absolutely hardcore in our love of this music and we felt [the group’s leather-and-studs biker uniform] was an image that captured the essence, spirit, sound and drama of the music,” Halford says. “It spread almost instantly, and within just a few years there were numerous other metal bands gearing up to join this great new sound and look of music.”

Besides forging the identity of heavy metal, Judas Priest also hammered out impressive commercial success thanks to hit songs “Living After Midnight,” “Breaking the Law” and “You’ve Got Another Thing Comin’.”

On the strength of such classic Priest albums as Hell Bent for Leather, British Steel, Screaming for Vengeance and Defenders of the Faith, the band would ultimately sell more than 30 million records. In true rock and roll tradition, Halford rewarded success with excess.

“We were all on the crazy train, as Ozzy says, and it was a fabulous time to be in rock and roll,” the singer says of the 1980s. “But if you’re an alcoholic like I am, you suddenly realize it’s becoming a burden rather than a pleasure.” 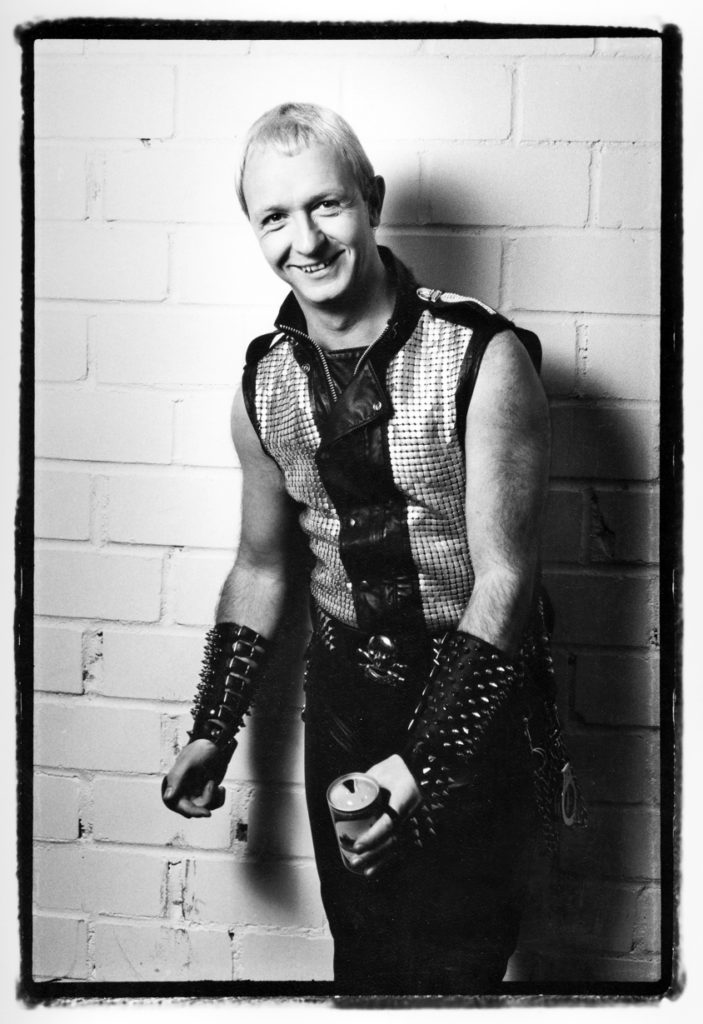 THE HELLION: Halford fueling his backstage buzz during his bulletproof drinking daze. (Photo by Ross Halfin)

“In those days, I’d get through a case of Budweiser and vodka and tonic literally during the show. I was guzzling it like water,” he continues. “I’ve spoken to my friend Alice Cooper about this and we just can’t believe how we did it. When you’re in your early 20s, you’re indestructible.”

Sober since 1986, Halford was not without future struggles. Sparring over creative differences and faced with burnout in 1992, he left Priest and re-emerged with a rabid new thrash band called Fight. While Priest staggered forward with singer Tim “Ripper” Owens, Halford confounded his fans in 1996 when he transformed into a Nine Inch Nails-inspired voyeur under the moniker, 2wo.

Fans were miffed, but they had another thing coming.

In a bold move that stood to alienate him from the macho world of heavy metal, Halford went public in 1998 with confirmation he was gay. As a testament to his bulletproof status, the metal community barely flinched. By 2000, the singer returned triumphant to his metal roots with his self-named band, Halford, and in 2003, he made peace with the Priests and released two new albums, including 2008’s ambitious double-disc concept Nostradamus.

“I think if you’re a creative person — whether you play music or write books or make movies — you have to dive into the deep end and splash around a bit, and see what you can create,” he says. “I look upon all my work as being very satisfying.”

As for the 2012 album and future Priest releases, Halford says fans should keep the faith.

“It’s still all about that creative spark,” he says. “I know I’ve still got it and I know Glenn’s still got it. We’re still just as buzzed as we were 40 years prior when we made our first record and had to sleep in the van because we could only afford the nighttime studio rates.

To hold Priest fans over until a new studio album is available in 2012, Sony Music recently released a greatest-hits collection entitled The Chosen Few. The twist? The album’s track listing was chosen by such metal notables as Ozzy Osbourne, James Hetfield, Alice Cooper, Joe Elliott, Slash, Lemmy and others. Songs include “Grinder,” “The Ripper,” “Delivering the Goods” and “Diamonds and Rust,” along with Priest’s radio hits.