Could This Be Magic? My Interview with Eddie Van Halen

I interviewed Eddie Van Halen in 1995 and it was an honor for obvious reasons.

As someone who grew up on Van Halen’s albums and was musically nerdy enough to appreciate Eddie’s mind-blowing, guitar virtuosity, I knew I was not only talking to one of history’s greatest rock musicians, but also a guy who soundtracked my youth.

The news of his passing last week (Oct. 6, 2020) was a crushing blow to generations of fans, but the flood of tributes that washed across the Internet also brought a rush of fond flashbacks to people of a certain age. See, Eddie not only is universally lauded for his jaw-dropping reinvention of how rock guitar is played (and built), but also for the intangible ties his universal music has to millions of hearts and memories – mine included.

Who among us hasn’t gotten lost in the hopeless joy of trying to play air guitar to “Eruption?” Who didn’t tap a backyard keg to the ripping chug of “Unchained” (while the neighbors called the cops)? Who didn’t grin back at MTV during “Jump!”?; or dance the night away at a wedding reception to “Love Walks In;” or drive a lot faster than 55 with “Dreams” fully cranked on the way to the beach? If you didn’t, I’m sorry.

Yes, Eddie Van Halen was a musician’s musician, but his famous smile and knack for turning a song into a party made him everyone’s go-to guitarist — which is exactly why a loss of his magnitude never comes with enough fair warning.

Godspeed, Eddie, and thanks for the music, the memories … and all the best parties! 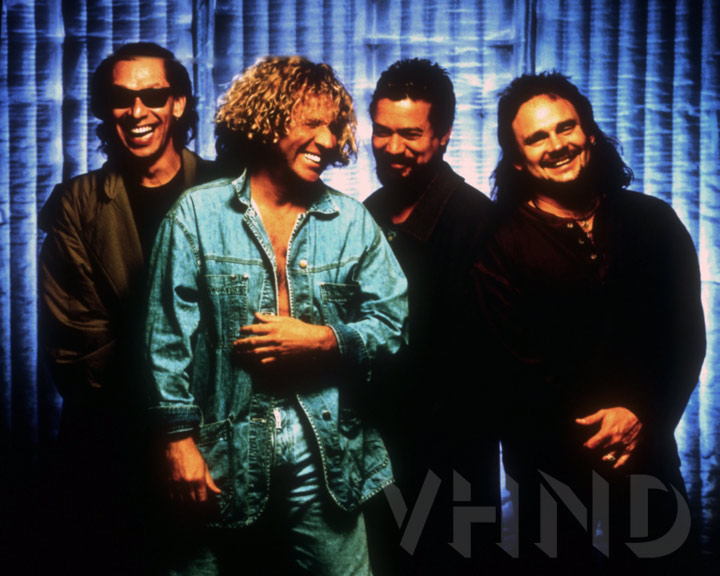 By David Glessner
Special to the American-Statesman
Sept. 30, 1995

Ask your mother if she’s heard of Van Halen, and chances are she has. The world-famous rock group is an American institution thanks to an unblemished catalog of top-selling albums, freewheeling concert performances and, of course, the fiery guitar wizardry of Eddie Van Halen.

Calling from an Iowa stop on Van Halen’s “Balance” tour, which lands in Southpark Meadows tonight, Eddie comes across as refreshingly unaffected by his superstar status. He apologizes for taking five seconds to find an ashtray, then exudes an enthusiasm rarely found in an 18-year rock veteran. He also laughs – a lot.

“I’m not a rock star, I’m a musician,” Eddie said. “If I inspire someone to pick up a guitar, that’s great. That’s what it’s all about, but I don’t give it that much thought.” 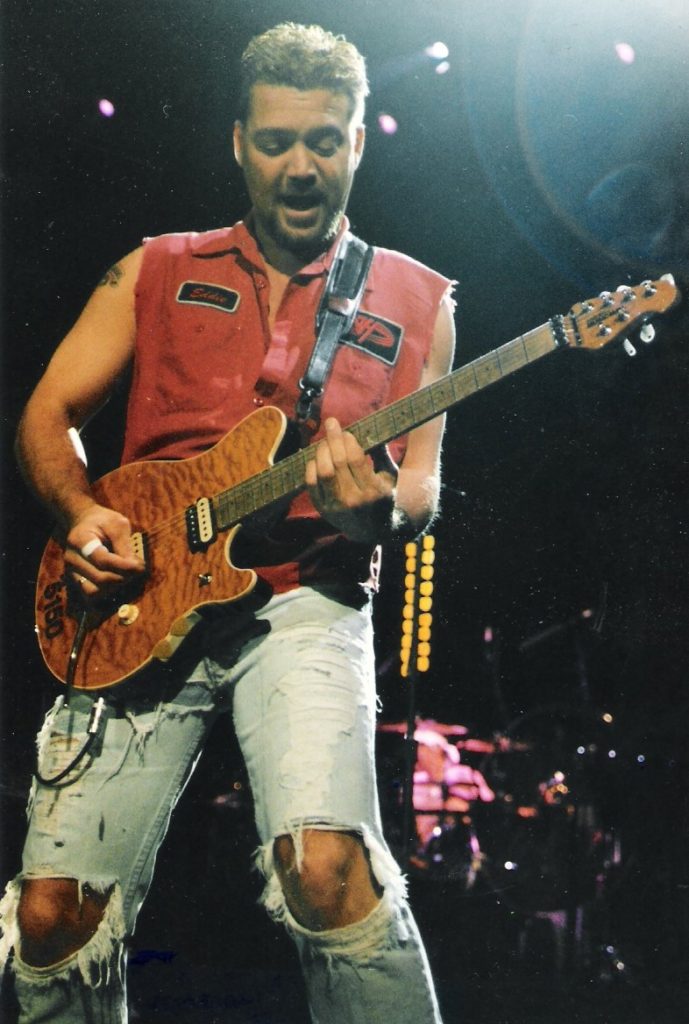 UNCHAINED: Up close with Eddie at the Houston Summit in March of 1995 during the ‘Balance’ tour. (Photo by David Glessner)

Eddie blindsided rock’n’roll in 1978 with his trademark tapping technique, massage-to-a-death-grip finesse and sheer fretboard speed. He’s left countless wannabes in the dust and continues to leave accomplished players bewildered by his guitar mastery.

“If I hear something in my head and I can’t get it out in a conventional way, I damn well figure out some way to get what’s in my head out,” he said.

Van Halen – the band – is rounded out by drummer Alex Van Halen, bassist Michael Anthony and vocalist Sammy Hagar, who replaced original singer David Lee Roth a decade ago. On stage, the band members’ collective enthusiasm spills into the crowd.

“Making records is just an excuse to go out and play,” Eddie said, laughing. “Playing is just instant interaction with people. We’re up there having a good time, and I think that transfers to the crowd. The crowd is part of the show, and they genuinely get into it, which is great. There’s a magic to it.”

With shout-alongs ranging from oldies including “Ain’t Talkin’ ‘Bout Love” and “You Really Got Me” to newer cuts such as “Amsterdam” and “Aftershock,” Van Halen’s set list is open to improvisation.

“We threw in ‘Unchained’ the other night, and only about 10 percent of the crowd was into it. The rest of them want to hear the hits,” Eddie said. “It’s kind of a tough call on our end. (The set list) changes all the time. Who knows? By the time we get to Austin, it may change again.”

One thing that won’t happen tonight is a re-creation of a recent outdoor concert in Denver.

“It was the first time in history we played in the snow. The audience looked like Q-Tips, and so did we,” Eddie said, laughing. “So much snow got dumped on my guitar, the strings wouldn’t even ring. All my fingers were frozen, but it was still a rockin’ show – snowball fights and everything.”

“I was never really comatose drunk, otherwise, I wouldn’t have been able to play. Once I stopped drinking, I started feeling all the aches and pains.”

Though the current tour started in January and won’t end until November, it’s a short jaunt by Van Halen standards.

“It’s a shorter tour than normal, but we’re playing five nights a week with only a few short breaks,” Eddie said. “It’s enough time to do laundry and go back out.”

During the Roth era, Van Halen tours were the stuff of legend. Trashed hotel rooms, endless parties, groupies and overindulgence were the norm. Eddie’s 14-year marriage to actress Valerie Bertinelli, the birth of his son four years ago and a newfound sobriety have put an end to the lifestyle that has left him with a degenerative condition in one of his hips.

“It’s from years of jumping around (on stage) and not being able to feel the damage I was doing because I had half a heat going,” he said. “I was never really comatose drunk, otherwise, I wouldn’t have been able to play. Once I stopped drinking, I started feeling all the aches and pains.”

Eddie will have the hip repaired after the tour, he said. In the meantime, he faces his stage fright sober and is enjoying a keener awareness of his playing.

“I tend to concentrate on playing more, and I’m playing a lot tighter,” he said. “I’m not leaping off the speakers or the drum riser, but I’m bopping around pretty good.”

Van Halen is the sole survivor of a pack of Southern California rock groups that followed in its footsteps. With Ratt, Motley Crue, Poison, Quiet Riot and others defunct or spiraling into obscurity, one wonders what keeps Van Halen at the top.

“The most important thing is, the music we play comes from the heart,” Eddie said. “We don’t try to conform to the latest flavor of the month. We’ve been asked to do unplugged, but hey, I’m just not an unplugged kind of guy.”