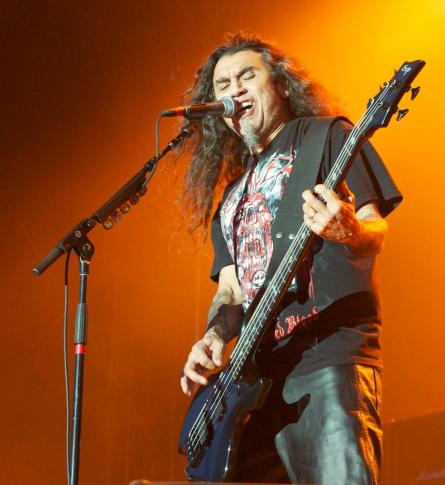 Not content with just haunting the chapel, Slayer is coming to possess your TV.

On August 17, the thrash-metal titans will reissue the out-of-print DVD titles “War at the Warfield” and “Still Reigning,” from 2003 and 2004, respectively. The pair will be joined by 1995’s “Live Intrusion,” which has been digitally remastered for this first-time-ever release. All three DVDs will be sold separately at retail and online ($13.98 each). A limited edition “Slayer Live DVD 3-Pak” ($29.98), will be available exclusively on Slayer’s website, www.slayer.net.

Along with Slayer’s signature brand of murderous metal mayhem, the DVD’s offer footage of Machine Head’s Robb Flynn and Chris Kontos joining Slayer on stage for a cover of Venom’s “Witching Hour.” You’ll also meet some of Slayer’s very … how-shall-we-say… um, “interesting” fans, including the nut job who had “Slayer” carved into his inner forearm as the ultimate souvenir (because chicks dig scars!).

Be sure to also look for Slayer in the flesh on the American Carnage Tour featuring Anthrax and Megadeth. For tour dates, go here.