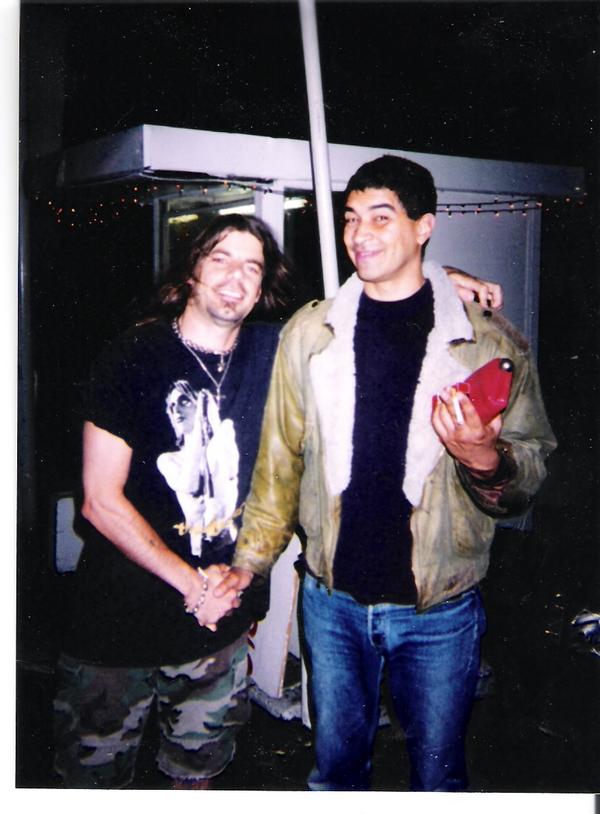 By Metal Dave
This photo was taken behind the Viper Room on Hollywood’s Sunset Strip circa 1999. On the right is guitarist Pat Smear who, besides having one of the coolest names in rock, got his start with crash-and-burn punks, the Germs, before moving on to Nirvana and the Foo Fighters. On the left is a young(er) 2Fast2Die (who is still waiting to get his start).

What began as a trip to Hollywood with my best friend Buzz for the sole purpose of raging on the strip that birthed the Doors, Van Halen, Motley Crue, GN’ R and countless others was extended an extra day when I made a few phone calls (how did we survive before texting?) and learned my new favorite band, Buckcherry, was home from tour and would be playing at the Viper Room the night I was due to fly home to Austin. Damn! A couple more phone calls postponed our return flight and landed us on the Viper Room guest list. Score!

So we take a cab to the Viper Room (where actor River Phoenix overdosed and died five years earlier) and get ready to freak out the guys in Buckcherry who have no idea I’m in L.A. One-by-one, they stroll up the street to find me standing on the corner. “WTF are you doing here??!!” was exclaimed and answered repeatedly with each new Buckcherry arrival.

The Viper Room door guys (burly bouncer types dressed in tuxedos) confirm I’m on the guest list, but frown on my attire (Stooges T-shirt was fine, but the ratty cut-off shorts were apparently in grave violation). We step aside and express our dilemma to Buckcherry guitarist Keith Nelson who goes looking for a pair of sweat pants. No dice!

Moving to Plan B, road manager Rick Canny (and his ever-present cigar) starts negotiating with the door goons. This being Hollywood, the guest-list line is longer than the paying-customer line and nobody appreciates the hold-up. Rick finally leverages the sob story that I’m from Texas, too dumb to know better and a friend of Buckcherry. Whatever works, dude. We’re waved in under the sound of snickers and the glare of dirty looks. See ya!

Inside, I meet Doors keyboardist Ray Manzarek and Sex Pistols guitarist Steve Jones (who co-produced Buckcherry’s debut album). Whoa! Manzarek is with author Danny Sugerman (RIP) who once managed the Doors and also wrote the books “No One Here Gets Out Alive” and “Wonderland Avenue.” Jones, meanwhile, is in the corner bucking the no-smoking policy so I join him and get ready for the gig. Thanks, mate!

After Buckcherry kills it, we file out the back door where I bump into Pat Smear. He’s as foo-foo (get it?) as you might imagine, but ridiculously cool, and also a huge Buckcherry fan. He asks how I know Buckcherry (I wrote one of their first bios) and enthuses that he thinks they’re going places. Then he offers to pay for all my drinks if I return the next night to see Buckcherry play the Whisky! Ohhhh, please kill me!

Tempting as it was, I had to get back to Texas, but I left L.A. with handshakes from my heroes, a great time with friends and perhaps a raincheck from Mr. Pat Smear(?).