Cheetah Chrome isn’t the biggest cat in the cage, but he can damn sure rattle it just as loud as the rest.

From the machine-gun riff of  “Sonic Reducer” through the rest of the Dead Boys’ savage punk rock, Cheetah’s raw guitar power is every bit as vicious as those other strummers in the Clash, Ramones, Sex Pistols and Stooges. Sure, those bands amassed more prominent legacies, but you’d be bottled behind CBGB if you didn’t count the Dead Boys’ 1977 debut album, “Young Loud and Snotty,” as an absolute, must-have, punk-rock classic (the title alone spits volumes).

Today, Cheetah lives in Nashville where he probably scares the neighbors while serving as a head honcho at Plowboy Records. Established to preserve the legacy of country western singer Eddy Arnold, the record label also nurtures renegade, outlaw-Americana-cowpunk artists and other musical misfits. No surprise then that Cheetah’s new album, “Solo,” is right at home on Plowboy (and if you like the streetwise, garage-rock of Alejandro Escovedo’s “Real Animal,” you’ll love Cheetah’s “Solo”).

As he readies for multiple SXSW appearances in Austin and a tour with his pals, the Streetwalkin’ Cheetahs (no relation), 2Fast2Die caught up with Cheetah for some (very) random Q&A.

As a kid, what album changed your life and inspired you to play music?
Well, “Meet the Beatles” was the first to make me want to play. When I did begin to play guitar, I really got into “High Tide and Green Grass” by the Stones and the first Steppenwolf album. The leads on “Born to Be Wild” inspired me to be a lead guitarist. 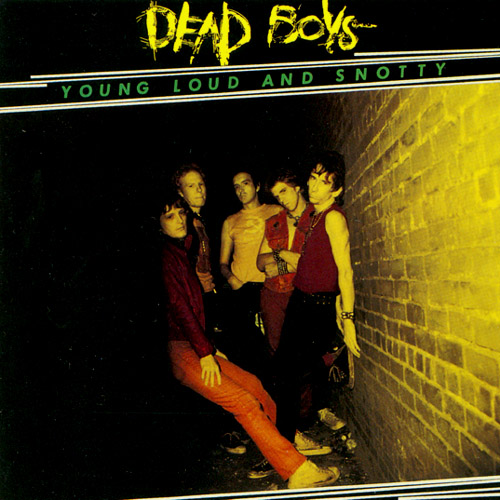 ANY QUESTIONS?: The Dead Boys’ debut album was a rare case of truth in advertising.

What inspired your stage name, Cheetah Chrome?
Nothing really. It was sort of a joke nickname in school when I ran track for about two weeks; I’d also had a sort of fascination with cheetahs after seeing one at the zoo when I was a kid. When “Search and Destroy” came out, that clinched it! As for Chrome, well Bators insisted I have a last name, because I wanted to go with just “Cheetah,” like Tarzan ‘s monkey. Stiv was big into numerology and I guess just “Cheetah” didn’t bode well or something. So he came up with Chrome, which I hated, but he finally wore me down.

What do you remember most about Stiv? Share your overall memory of him and then share one crazy specific memory
Just his friendship and how we used to hang out together. I have a lot of good onstage memories: the eye contact we used to have, the jokes we used to make to each other away from the mics. But mostly I remember just hanging out and laughing a whole lot. One of my favorites is when he used to do the whole Dick Van Dyke entrance to a hotel, coming in the front door and tripping over all of the lobby furniture, knocking over and catching lamps, ashtrays, plants etc. … and then just straightening himself out and walking calmly to the elevator, leaving nothing out of place. Genius! 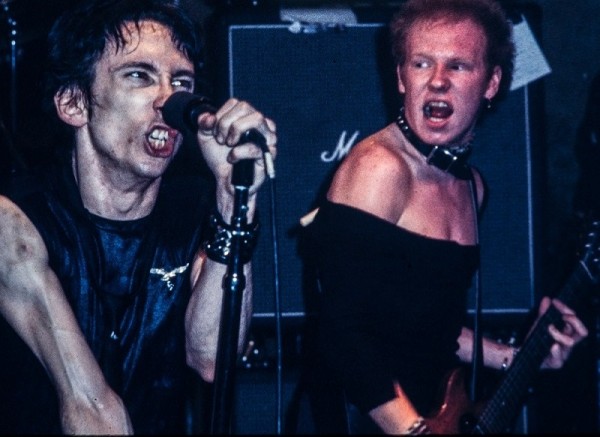 STIV FOREVER: Cheetah on stage circa 1977 with iconic Dead Boys singer Stiv Bators. The Dead Boys relocated to New York from Cleveland and became a crowd favorite at CBGB along with the Ramones, the New York Dolls and others. Stiv would later form The Lords of the New Church before dying in 1990 from injuries suffered after being hit by a taxi.

Describe your most chaotic Dead Boys gig
Had to be one of the Halloween gigs at the Ritz. Those were insane. We had two bad-ass roadies, Johnny and Kenny, who spent the entire show out front with us throwing people off the stage. This was the height of the moshing, stage-diving days. I always hated that shit! What a frigging waste of time; pay an outrageous ticket price and then do your best to distract the band so they can’t play – wise move! Of course these were the same people sitting in squats being “straight edge,” not drinking, taking drugs, having sex or eating meat, then complaining how life sucked. Well, duh! 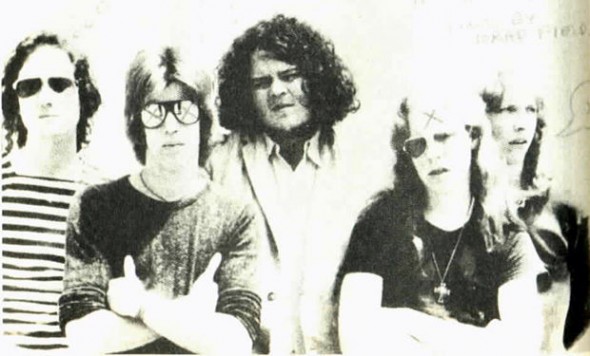 HELL-OOoooo CLEVELAND!: Prior to forming the Dead Boys, Cheetah, second from right, was in the Cleveland band, Rocket From the Tombs. The band is cited as the birthplace of later-day Dead Boys songs like ‘Ain’t it Fun,’ ‘Sonic Reducer’ and ‘Caught With the Meat in Your Mouth,’ among others.

What exactly is a sonic reducer and how many times have you been asked this question?
I have been asked that question 20,000,093 times. This makes 20,000,094. It is a fictional object that you don’t want to be on the receiving end of. Let’s leave it at that. Classified.

Speaking of, there are some punk purists who feel the inclusion of the Dead Boys song “Sonic Reducer” in a TV commercial is blasphemy. Then there are those who feel it’s about damn time the Dead Boys got paid. Your thoughts?
I  think it’s a no brainer. It’s for a state-of-the-art speaker system that really does kick some serious ass. It’s named “Sonos,”so I mean, it’s a natural: “Sonic/Sonos.” It shows the band at their best, prominently featured. I see no conflict, although even if it was a Massengill ad I could argue that after 37 years the Dead Boys have enough street cred to tell anybody who doesn’t like what we do to kiss our asses. 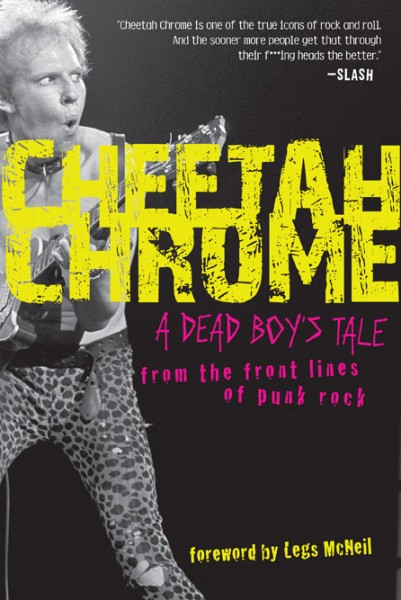 BLITZKRIEG BOOK: In 2009-2010, Cheetah wrote a book chronicling the chaos of a life lived dangerously. As you can see from the cover, the book is enthusiastically approved by Guns N’ Roses guitarist Slash whose band once recorded the Dead Boys classic, ‘Ain’t it Fun.’

You lent your consulting expertise to the movie “CBGB.” In your honest opinion, is the movie an accurate snapshot of that era or is it enhanced with a lot of Hollywood “creative license”?
It’s a pretty accurate story of Hilly and how the club got started. A lot of the Dead Boys stuff is very accurate, at least in capturing the overall vibe. Other things are not – I never drove back then, and even if I had, none of those guys would have ever gotten into a vehicle I was driving! They were nervous about my walking, let alone my driving! I didn’t have a license until 2001!! A lot of the stuff on other bands is pieced together from things like “Please Kill Me,” and some accuracy got lost in the mix – like the truck crash happened to the Stooges, not to us. I’m told some of them were asked to help with the film and refused, so they had their chance to set the record straight and didn’t take it. I took mine. One major discrepancy was the part when Johnny is in the hospital and someone says something to the effect that “well, if he dies at least we’ll sell some records.” Nobody in the band said that, though it was said; I won’t say by who. 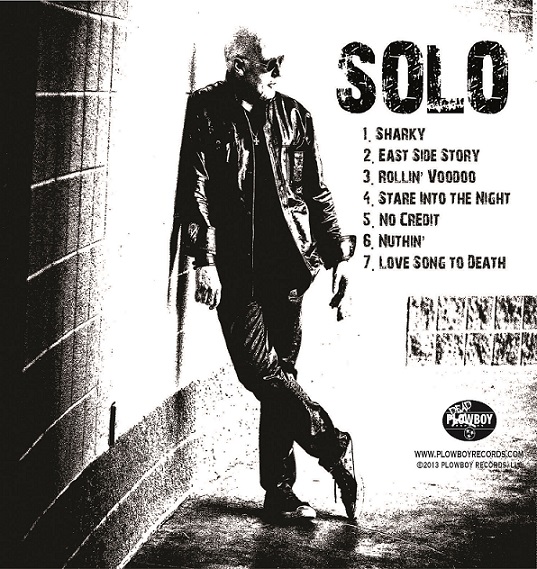 SO GOOD: Cheetah’s ‘Solo’ album features guest musicians from the New York Dolls, The Cult and the Blackhearts.

What’s your fondest memory of Joey Ramone?
Coming back to my place on E .5th St after closing down the Cat Club and drinking beer and playing records till dawn.

What took so long to put out “Solo” and why is now the right time for its release?
Well, I never had the right label to put it out after Smog Veil went on hiatus. Frank Mauceri was the only person I trusted in the music industry in that regard. When Shannon Pollard, Don Cusic and I started Plowboy Records in 2012, and I became an A&R man, I thought to myself, “Hmmmm … Now who was that guy I saw that I thought was pretty good? Oh, it was me!” The timing had something to do with the movie — strike while the iron is hot. Again, a no brainer. 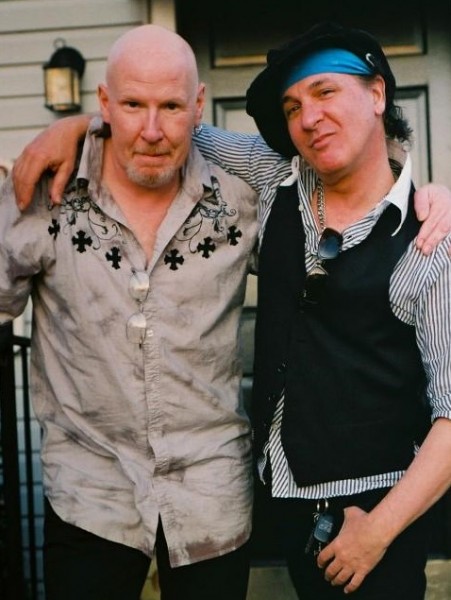 I met you in 2010 when you and Sylvain Sylvain played at SXSW in Austin under the band name, The Batusis. You may recall your publicist had me pose as your driver so I could get into the gig. So, who’s the better guitarist, you or Syl?
Hey, thanks for not putting me on the spot! I really appreciate that! Actually, we’re very different guitarists, which makes it work nicely when we play together, but I do have to give the nod to Syl. He has the best instincts of any musician I’ve ever played with. He can fly by the seat of his pants better than I do. He’s extremely spontaneous. When we were recording the Batusis EP, he brought in “What You Lack In Brains,” very bare bones. He was calling out the changes to us as we were playing it the first time – and that ended up being the track! I don’t think he even had more than a couple of lines of lyrics ready, but he knew where it was going instinctively. I’m more methodical. I like going back after the track is done and working on my leads, trying guitar parts. Syl’s a one-take wonder 90 percent of the time. As personalities, we’re pretty much on the same page. We’ve been hanging out for 30-odd years, so we know each other well. Traveling with Syl is a gas. The Batusis tours were probably the most enjoyable I’ve ever done!

Tell us something we don’t know about Cheetah Chrome: Any hobbies? Hidden talents? Guilty pleasures? Favorite pastimes when you’re not making music?
Hobbies? None really. Hidden talents? I’m not a bad piano player; I also play a lot of open-G tuning stuff on acoustic around the house, and slide. Guilty pleasures? I really like Robbie Williams’s “Escapology” CD. And I love the Bee Gees.

Thanks for taking the time, Cheetah. I’ll see you at SXSW and hopefully this time I won’t have to pose as your driver to get into the gig.
Hey, you walk in like ya own the place this time! Thanks for the interview.