Yakking with … Ginger, a Wildhearted rocker

I first met Ginger in 2004 when his band, the Wildhearts, returned to America following an extended absence. I didn’t know it at the time, but the Brit’s personal life was as troubled as his various bands (The Throbs, Quireboys, Wildhearts, SilverGinger5, Brides of Destruction and others I’m surely forgetting). 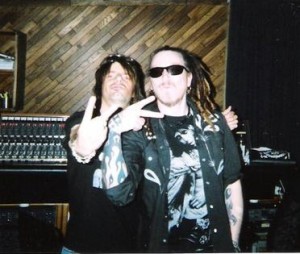 When he phoned me out of the blue in 2005 to say he was back in Texas recording a solo album at Willie Nelson’s studio, I jumped at his invitation to visit and get an exclusive interview for Classic Rock magazine. By the time I left the studio countless hours later (as Ginger would say, it was quite a “stormer!”), I not only scored a coming-clean interview, but also a recorded guest spot on his album, “Valor Del Corazon” (I’m the spooky voice doing the “Pants on Fire!” outro at the 5:08 mark linked below).

Today, Ginger is happier and healthier than ever. His new highs include the gym, Twitter and playing guitar for an all-star band of glam-venomous killers led by Hanoi Rocks singer Michael Monroe. I caught two Monroe gigs at SXSW 2010 (photo below) and can honestly say both were among the top 10 gigs I’ve EVER seen (you couldn’t beat the setlist with a fist of brass knuckles!). Considering the RLF lineup of Monroe, Ginger, bassist Sami Yaffa (Hanoi Rocks/Jetboy), guitarist Steve Conte (New York Dolls) and drummer Karl Rockfist (Chelsea Smiles/Danzig), how could it be any less than high-voltage? 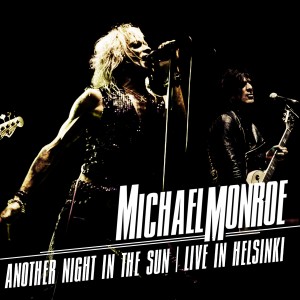 With Monroe’s new live album, “Another Night in the Sun,” recently released and a brand-new studio album due by year’s end (not to mention Ginger’s latest upcoming solo effort ), I caught up with me mate for some random chatter.

Plug your most recent project
Well, I’m playing guitar with Michael Monroe, and I’m loving that. Really great guys. An absolute pleasure to work with and hang out with. Playing guitar is my first love and I’m having way too much fun reliving my youth! I also have a charity project called Guitarmageddon where I get to play with my favorite people in a 10-piece acoustic band. It’s so over the top, it’s ridiculous. I’m also writing a new solo album I want to record early next year and I’m putting a project together with some friends of mine that could take a while to get off the ground due to people’s commitments. We’ll see. I guess I like to keep myself busy.

Album that changed your life and why?
Ramones “Rocket To Russia.” I thought I knew my taste, then I bought it on the strength that they looked like me with the bike jackets, ripped jeans, cool t-shirts, black and white sneakers. The moment I heard their sound I cried like I’d found my missing twin. They sounded so perfect in every way. Since that day, I constantly remind myself that no matter how much I know I still know very little.

First concert and your memories of it?
Slade. It was also the first beer I ever bought. Some girl gave Noddy Holder a hand job onstage. The band was louder than hell, all the hits. Still one of the best gigs I’ve ever seen. 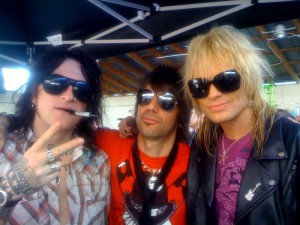 Touring horror story or Spinal Tap moment
Once, we were touring through Europe and ran out of things to do. We were so bored we devised a game of dare where everyone put their worst nightmare dares into a hat and we played cards to find a victim. The loser had to pick a dare from the hat. Our new guitarist, Jeff Streafield, lost 90 percent of the games and had to lick vomit off someone’s leg, wipe the toilet seat and eat the paper, eat the tissue that our flu-ridden driver blew his nose into, etc. etc. That was certainly a nightmare, if only for him.

Your best and worst tattoo
Best is probably the Japanese characters on my forearm, done in the old Japanese style by hand. Worst is probably some of the ones where I had a tattooist’s assistant practice on me. He went in way too deep and the colours bled out so they look kinda amateur. I don’t consider any of the designs themselves ‘bad’ as they all represent an important time in my life.

Name of your very first band and other rejected band names
First band name was Zig Zag, a NY Dolls inspired glam band that used to play the notoriously tough working mens clubs of North East England. I think the audiences were so confused they gave us an easy ride. I’ve put so many band names together that the list of rejected band names is the length of a novel.

Musical accomplishment you’re most proud of?
Way too many to count. Writing with Jason and the Scorchers, singing with Maria McKee, playing with these guys, working with some of the amazing musicians and producers I’ve been honoured to work with (including Jack Douglas who is producing the current Monroe album and previously worked with all of Ginger’s heroes, including Aerosmith, John Lennon, Starz, Angel and Cheap Trick, among others). I guess the thing that makes me most proud is that people seem to want to play music with me. I have very few rejections and most of my rock’n’roll dreams come true. I’m a very fortunate boy.

Share a secret. What is your hidden talent? Guilty pleasure?
I love country music. If I wasn’t a musician, I’d research UFOs. I like films as much as music and I’m a brilliant Dad!

Hero or villain? Best (or worst) “rock star” run-in
Met a few dickheads, but who hasn’t? This business adores egotistical pricks. I’d rather give this space to the truly great, like AC/DC and Motorhead. The reason why those bands are still around is because there is ZERO bullshit with those guys. Humble, brilliant and devastatingly professional. The pricks vanish pretty quickly, in my experience, and the real deal sticks around as long as it fucking want to.

For more info on the Michael Monroe band, go here.

To learn more about Ginger and the Wildhearts, go here.

Below: Video from a daytime Michael Monroe gig during SXSW in Austin, 2010. Audio is crap, but video is great! For more videos, go here.