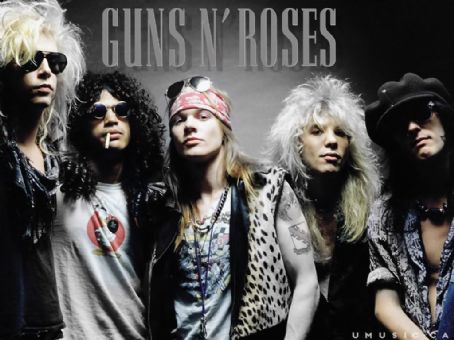 Above: Which one of these guys is totally wasted? In a 4-1 vote, drummer Steven Adler, second from right, was kicked out of Guns N’ Roses for being the biggest junkie in a band full of druggies. As he explains in his tell-all book, things only got worse from there. As the original drummer for Guns N’ Roses, Steven Adler crashed at the crossroads of Paradise City and Paradise Lost.

As he admits in his book, “My Appetite for Destruction: Sex & Drugs & Guns N’ Roses,” the wreckage would have been a little less twisted if Adler spent more time looking over his shoulder and less time chasing the dragon. Then again, such details are a pain in the ass when you’re blinded by fame and the glow of the crack pipe at the reckless young age of twentysomething.

Without exaggerating, Adler was completely off the deep end by the time he was 25. Even with Mr. Brownstone acting as the loaded Guns’ unofficial sixth member, it was Adler who took the fall for being the biggest mess of the bunch. Wow!

Booted out of GN’R through either conspiracy or complacency (or both), Adler was a “has-been” before his 27th birthday. In a tailspin of despair, self-doubt and alienation, his drug addictions got deeper and darker until suicidal tendencies, emergency room visits and paranoid madness joined Adler’s festering party. He landed in jail (more than once), entered and exited rehab, ignored the oozing sores that were rotting his flesh and, of course, had the drug-induced stroke that permanently left his face half-lopsided. By the end of the book, his desperate mother is racing him to another rehab facility as Adler sits shotgun huffing one last crack rock. Let that sink in for a minute! 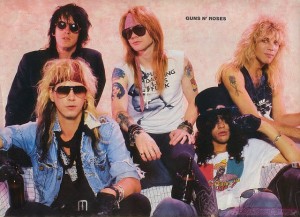 Among the book’s interesting take-aways is Adler’s portrayal of singer Axl Rose. As Adler tells it, Axl has been a self-centered, volatile control freak since the band’s club days. In fact, Adler claims Axl was a no-show when GN’R got its first big gig opening for Alice Cooper! The other guys had to wing the vocals and walk off stage with their tails between their legs (fortunately Alice was OK with the whole debacle). Fame may have amplified Axl’s notorious self-importance, but Adler says the singer’s true colors have always been blinding (a rare exception being the time Axl left a movie set and was the lone and most unlikely Gun to visit Adler in the hospital as he recovered from a broken arm).

Also of note is the book’s closing credits in which Adler thanks all of his former Guns N’ Roses band mates except for his high-school buddy, Saul “Slash” Hudson (who late in the book makes a physical, if not emotional, appearance to coax Adler into another round of rehab). Hmmm. Slash’s absence among the “special thanks” is a glaring omission after the book leads you to believe the guys have grown somewhat cordial and that Adler has come to terms with their love/hate brotherhood. Wishful thinking? 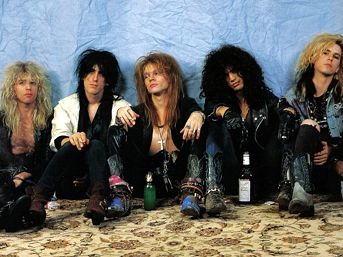 It’s painfully apparent Adler has a hopelessly addictive and destructive personality, yet his smiling, boyish naivety makes him contagiously endearing. Rather than being an arrogant jerk (at least from his own perspective), the reader is left with the feeling that Adler is just a guy who likes to party, albeit to dangerous extremes. And unlike Axl Rose, Adler is a “more-the-merrier” kinda guy. Overall, you get the impression you’d like to party with him (and he’d be happy to have you along), but it’s pretty clear you’d be well advised to run like hell after a few beers.

By book’s end, Adler claims to be living more right than wrong thanks in large part to his loving wife. He also makes it perfectly clear he’d be the first to arrive at rehearsal if Axl and Slash reunited GN’R — and his motives seem to have little to do with the paycheck. In fact, you’re reminded throughout the book that Adler is not financially savvy enough for money alone to be his incentive. More than anything, he just wants to rock out and party with his fans.

All told, you can’t help but feel Adler was screwed by his GN’R bandmates either through their outright abuse or conspiring blind eyes. At best, they let him fall. At worst, they planned it.

Adler’s book is a great read (in a trainwreck kinda way) and as the drummer contiunally reminds, there is no denying the greatness of GN’R’s “Appetite for Destruction” and the band’s teetering, tumultuous reign. They may have ultimately stabbed each other in the back, but GN’R left behind a killer album, and at least for now, there is still no corpse.