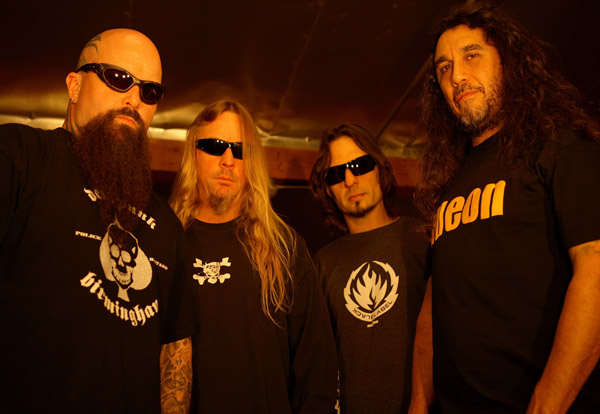 With Slayer set to rain blood over Texas this Friday-Sunday as part of the American Carnage Tour, featuring Megadeth and Anthrax, I revisited a 2001 interview with Kerry King and Tom Araya that I conducted for Metal Edge magazine (RIP). At the time, Slayer was promoting the “God Hates Us All” album and was gearing up for another incredible package tour featuring metal titans, Pantera. Take it away, Kerry and Tom. 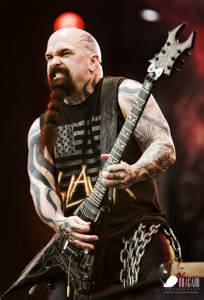 On 1986’s Reign in Blood being the unbeatable benchmark for thrash metal
Kerry King: I think it had to do a lot with timing. I think the general population was not ready for something like that — the rage, the songs, the new production angle and the timing just made the record. I don’t think a lot of those songs are any better than a bunch of songs we’ve written since then.
Tom Araya: It’s an awesome record, man. We’ve put out records with songs that could have been on the “Reign in Blood” album and people don’t even realize it. It’s like, “Dude, we still write songs like that! You’re just not paying attention!”

On the potential for a backstage drinking rivalry with Pantera
KK: Oh, that’s gonna be ugly! They are the only band I fear as my equal (laughs). I tell you what, I need to dry out a little before we go out there.
TA: I’m sure it’ll get ugly, because they’re all gonna try to outlast each other. I don’t partake in that like I used to — I’m sober from alcohol for a while now. I’ll have an occasional drink, but that’s not something I plan to do anymore as far as the excess goes. It’ll be interesting to see what goes on and how they handle it (laughs).

On guilty pleasure albums I’d find in their record collections
KK: Not much! I’ve got some classic stuff in there like Van Halen, Aerosmith “Rocks,” Sabbath, early Maiden, early Priest. But you know, that stuff comes with the (metal) territory.
TA: Oh, shit! You’ll find Gipsy Kings. That doesn’t fit the image of Tom Araya, but it’s part of my life. It’s a style of music that I grew up listening to. Metal wasn’t the only thing I grew up with. I come from a Latin background, a Chilean background. So growing up, I heard a lot of folk music. I grew up listening to the folk-type songs and the tango-type songs and bossa nova-type stuff. Believe it or not, I really like Gipsy Kings. They have some really, really great albums. I lost a lot of faith in music when disco was around, but then Van Halen came around toward the end of the ’70s. I credit a lot of my openness to the sounds of the world. I think that’s what I bring to Slayer — when I’m allowed (laughs).