Sunglasses hold a lofty perch atop the list of rock-star accessories, but for Judas Priest guitarist Kenneth “KK” Downing, they also helped hide a nasty secret. When I interviewed KK in 2005 for the San Antonio Express-News, he came clean regarding his seemingly sudden fixation on eyewear.

“Yeah, that was a bit of a horror story,” he said regarding JP’s 1986 “Turbo” tour. “I had this guitar tech who cut my guitar strings off (at the tuning pegs) and left them sticking out about a quarter-inch. (Vocalist) Rob (Halford) was onstage and he twirls around and hits my guitar neck with his arm, and two of these strings punch me in the eye. My eye turned all green and I looked like something out of a horror movie. So, I wore these sunglasses, which was even worse, because the sweat from my forehead steamed up the glasses. Instead of not being able to see out of one eye, I couldn’t see out of either!” 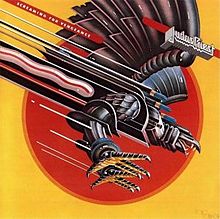 On the subject of Judas Priest’s 1982 breakthrough album, “Screaming for Vengeance,” Downing said:

“We had a lucky song called ‘You’ve Got Another Thing Coming’ that was a last-minute thing that we almost didn’t put on the album. We couldn’t believe that it was all of a sudden all over the radio. It made us a household name, which is very, very fortunate. Today, ‘Screaming for Vengeance’ is Judas Priest’s biggest-selling album ever.”