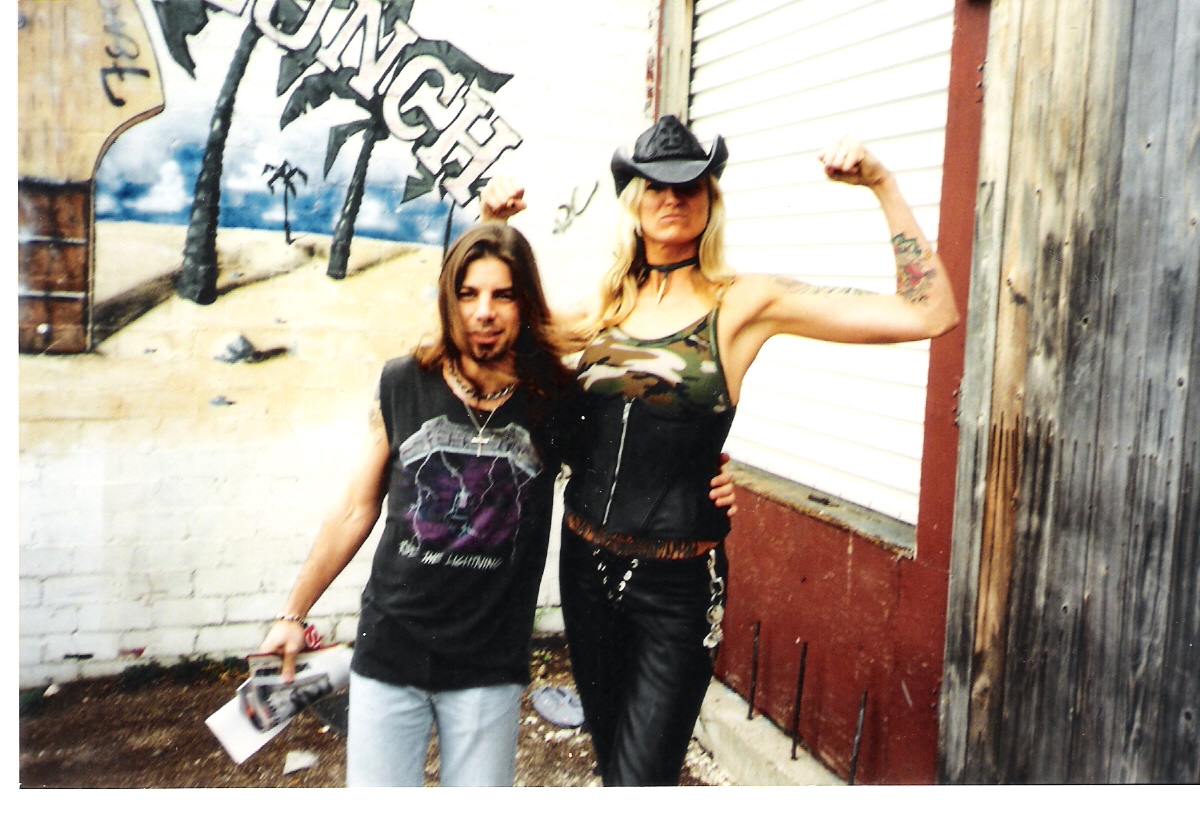 I like to call this picture “My Bodyguard,” because the girl towering over me is clearly tough enough to take care of business. Her name? Corey Parks, who at the time of this photo was the fire-breathing, cleavage-heaving, girl-on-girl makeout bass player in a dainty little feel-good, white trash-n-whiskey combo called, ahem, Nashville Pussy (one of the LOUDEST bands I’ve ever heard).

This photo was taken in 1999 behind Austin’s Liberty Lunch (note the mural on the wall) during the same week the long-standing, much-loved music venue closed forever after a 50-year history. Sadly, this evening’s Nashville Pussy gig was my last supper at the Lunch.

To get this photo, I left my day job and bolted to the venue in hopes of finding the band loading in. Upon my arrival, Corey was kind enough to ask a roadie (who may have been her husband at the time?) to snap this picture. I seem to recall the guy died a few years later? If not, my apologies. If so, my condolences. 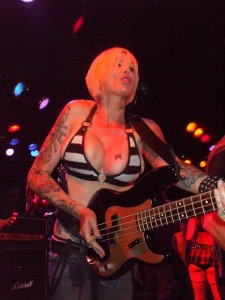 Corey also autographed a magazine photo of herself for me in which she is sneering and dressed in a satin bra and cowboy hat while baring her platter-sized, bikini-line Harley Davidson-style tattoo that simply says “Eat Me.” The autograph itself was an invitation of sorts that mentioned “wet” and “hellfire” (you figure it out!).

Subsequent to the photo above, I met Corey and her new boobs (left) many times. As you may have gathered, she is an imposing, take-no-shit kinda gal (her brother is former NBA dude, Cherokee Parks … height is in the genes), but she’s also plenty cool and fun.

A few years later, my wife and I met Corey backstage at the Warped Tour in San Antonio when she was performing with the band Die Hunns featuring her current husband Dwayne Peters (U.S. Bombs, Gunfight) on vocals. Corey and Dwayne spent about 30 minutes with us and broke the news that they were expecting a child together. Considering the parents, it’s highly doubtful that kid will ever be bullied. Yeesh! Can you imagine the PTA meetings?

Look for Corey’s latest band, The Chelsea Girls and check her out alongside her former Pussy cats, including guitarist Ruyter Suys (a bad-ass babe in her own right), below. Yee-haww!!!