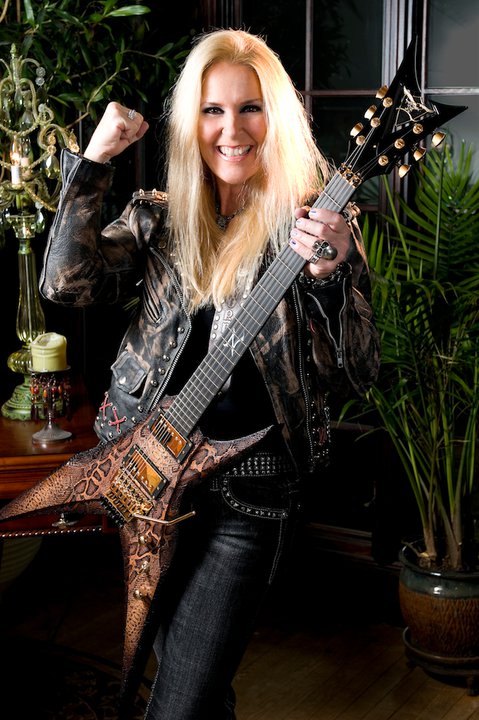 Lita Ford’s sex appeal blares louder than a Marshall stack, but no volume of cleavage and curves can overshadow her tenacious talent. A survivor of four decades in the boys’ club of heavy metal, Lita commands respect, because, well, to put it ever-so-mildly, she’s got big freakin’ balls!

On tour with Def Leppard and Poison in support of her new album, “Living Like a Runaway,” Lita is back with her arsenal of B.C. Rich guitars to remind us that beneath the fishnet and leather is a she-demon six stringer who can still push the big boys around (and make ’em like it!).

2Fast2Die recently caught up with his high school crush for an exclusive email interview with the ever-gracious, always lovely and forever rockin’ Ms. Lita Ford. 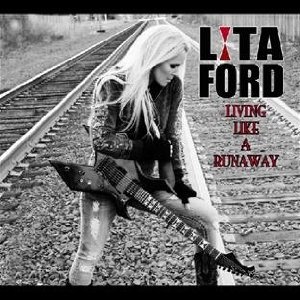 Lita Ford’s latest album, “Living Like a Runaway,” was produced by guitarist Gary Hoey and features contributions from Dio/Whitesnake guitarist Doug Aldrich as well as covers of Nikki Sixx’s “A Song to Slit Your Wrist By” and Elton John’s “The Bitch is Back.”

2Fast2Die: I’m guessing the making of your new album was therapeutic in some ways considering recent events in your life. What was your objective with “Living Like a Runaway” and how did the creative process unfold?

LITA: I received a phone call from Gary Hoey offering me his recording studio. I accepted his offer and we started writing. The first songs we wrote were “Luv 2 Hate U” and “Branded.” They were killer!!! We knew we were onto something HOT, HOT, HOT!!!

2Fast2Die: You’re often (and rightfully) cited as a role model for aspiring female rockers, yet you had few, if any, female hard-rock guitarists to look up to for inspiration. Who did you model yourself after and how difficult was it to be a woman without peers when you were an aspiring newcomer?

LITA: I never thought about the fact that there weren’t really any female rockers out there. I had seen Fanny and wasn’t blown away, but what did blow me away was my very first concert at the Long Beach Arena in California. I saw Black Sabbath in 1972. Who would have guessed that a few years later I would become engaged to Tony Iommi and have a Top 10 hit single with Ozzy? I literally saw my future at that show that night. That Black Sabbath concert changed my life. I was only 13 when I saw them play, but to this day I still remember how I felt when I walked into that arena. 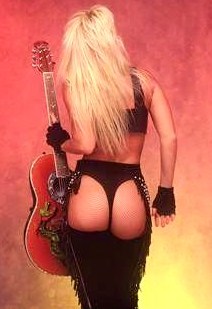 HOWL AT THE MOON: The other side of Lita

2Fast2Die: As far back as the Runaways, you always embraced your femininity. In fact, you’ve been bold enough to celebrate it and use it to your advantage. How do you respond to other women who might say you enforced the stereotype that women are to be objectified and sexualized (I remember the ass-less pants)? Are your feelings on the subject any different today as a grown woman and mother (albeit to boys)? Would your opinion be any different if your children were girls?

LITA: That was then, and this is now. People change with life’s changes. I used my chaps as a statement and they caused a lot of talk. The butt poster was famous!!! LOL Sex sells! But I believe a woman can still be sexy at any age. It’s in the eye of the beholder. I don’t believe in plastic surgery, unless it’s for medical reasons. 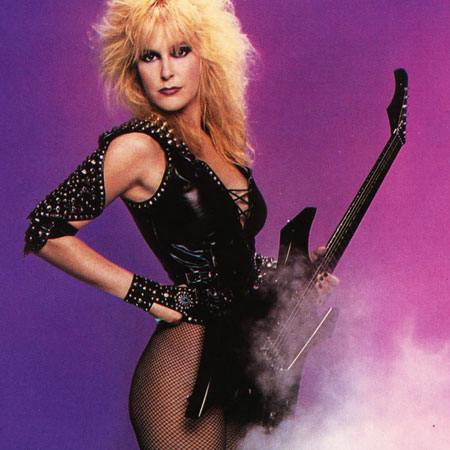 SMOKIN’: Hellbent for leather and armed with her trusty Warlock circa 1984

2Fast2Die: A lot of guys like myself had a huge crush on you during our teens and were envious of the various men in your life (Nikki Sixx, Chris Holmes, Tony Iommi, etc.). Excluding your recent ex (unless you care to comment), how do you look back on those guys now that time has passed? Also, how much of the Chris Holmes scene in the “Metal Years” movie was the real Chris versus him clowning for the cameras?

LITA: Chris was taken advantage of in the “Metal Years” by the producer. He was not aware of how they were going to portray him in that film. As a matter of fact, he was drinking water in the vodka bottle he was holding in the film. Pissed me off! Chris is an awesome person!

I like to remember Tony Iommi as one of the world’s most inspirational guitar players. Creating heavy, black music and guitar riffs. Sometimes things happen for a reason. Perhaps Tony wouldn’t have played those Sabbath riffs like that if he hadn’t had that accident with his fingers. Ya know? It caused him to play a certain way.

Nikki? Sexy, dark and mysterious. A leader, not a follower. A creator. Someone who followed his dreams and made them come to life. He always had a vision. Now, Nikki is like my big brother. He’s a good friend and a great person. 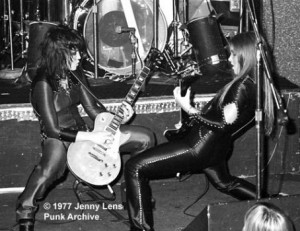 QUEENS OF NOISE: Joan Jett and Lita Ford rocking as the Runaways, 1977 (photo by Jenny Lens)

2Fast2Die: What thoughts went through your head when Joan Jett gained massive fame as a solo artist following the breakup of the Runaways? Personally speaking, I’d probably have all kinds of conflicted emotions as I watched something like that from the sidelines.

LITA: Nothing went through my head. I was not in contact with her at that time, nor did our musical tastes compete with each other. We have completely different audiences. I was busy working on myself. So Joan was not on my mind. 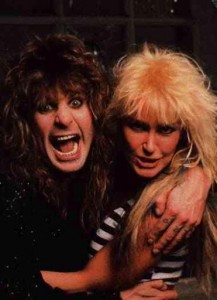 FLYING HIGH: Lita teamed with Ozzy for a smash hit single in 1988.

2Fast2Die: Were there any crazy episodes while working with Ozzy on your hit song, “Close My Eyes Forever”? Did you immediately know the song was a hit?

LITA: You never know a song is a hit until you get it out to the public and the radio stations. Ozzy has many stories. I think Ozzy is a very unique individual. People are so quick to assume he is crazy. But underneath the exterior, there is a talented person who sings his ass off.

2Fast2Die: Did the success of “Close My Eyes Forever” and “Kiss Me Deadly” help you clear any artistic and/or gender-based hurdles, or has it always been an uphill/unfair battle as a woman in hard rock?

LITA: Rock-n-roll is always an uphill hurdle no matter what you do or who you are. Yes, “Kiss Me Deadly” and “Close My Eyes Forever” helped my career.

2Fast2Die: Any regrets about not reuniting the Runaways while Sandy was still alive? Is there any possibility of some type of reunion in the future?

LITA: No, I do not have any regrets. The timing wasn’t good for a Runaways reunion. However, the timing is good now. [2Fast2Die says: This answer obviously required a follow-up for some elaboration to which Lita replied: NO RUNAWAYS REUNION..!!!]

2Fast2Die: OK. Silly question just for fun: Tell me about the cheesiest come-on you’ve ever been subjected to so we can spare everyone involved any possible repeat performances. 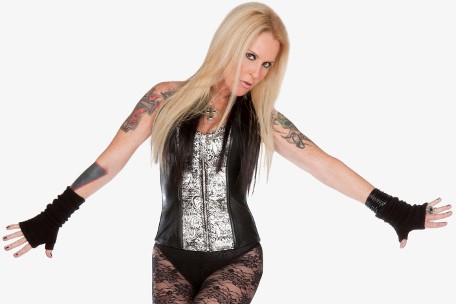 LITA: The cheesiest come-on was by two guys in floral Hawaiian shirts. They pulled up next to me in a brand new red Carrera Porsche, rolled down the window of the car and said, “Hey baby!!!” I had just come from my girlfriend’s house. It was Thanksgiving and my girlfriend’s mom had given us a bunch of food to take home. So I reached into the back seat and grabbed anything I could find, which was a corn on the cob. I said “HEY BABY THIS” and I threw the corn on the cob at the guy in the Porsche and missed him and hit his Porsche. OOPS!!! I dented the side of the Porsche, the light changed green and my girlfriend, who was driving the Camaro, floored it and drove off with the Carrera following close behind. They followed me to a hotel parking lot, and hotel security came out and said, “You girls need help?” The guy in the Porsche was dumping beer on my Camaro and smashing beer bottles on the pavement. I said to hotel security, “These guys are bothering us.” So security made them leave. They drove off and yelled at us, “YOU BITCHES!!!” LOL!!! We were just in a bad mood that day ;-). I bet he will never say, “HEY BABY” to anyone again.

2Fast2Die: Thank you so much for indulging me and my readers, Lita. Keep kicking ass and good luck with your album and tour.