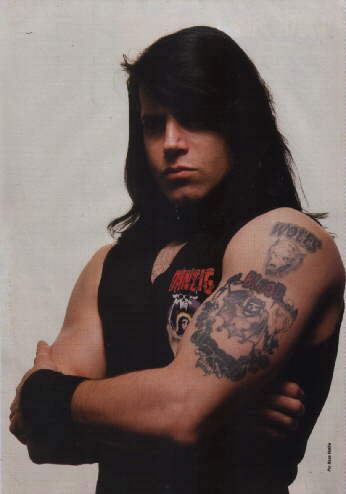 I’m often asked about my best (Lemmy) and worst rock star interviews and can say without a doubt Glenn Danzig is the prickliest (pun optional) one of all.

Glenn has held this dubious distinction without peer since 1990. Twenty years and still the champ! Sure, I’ve had some lame interviews over the years, but during our “phoner” in 1990, I couldn’t have been more deflated and Mr. Ho-Hum couldn’t have been any less interested in talking to me (he may have even yawned in my ear). To make matters worse, I was interviewing Glenn for a college newspaper (not Rolling Stone), so you’d think he was desperate for the publicity and might perhaps perk up and play along a little? Nope!

Fortunately, Glenn’s gotten incrementally more cordial over the years (if he was any more bored, he’d be dead). In my defense, I think I do a pretty good job of interviewing these people and steering clear of stupid questions about favorite colors and the current tour (“Um, it sucks, Dave! Tell your readers to save their cash.” Yeah, right!). I definitely take a certain pride in digging beneath the current press release and engaging the subject in a manner that lets him or her know I’m a true fan whose done his homework and not some poor hack who got stuck with this assignment. After all, I feel I owe that to myself, the subject and most importantly, my readers. 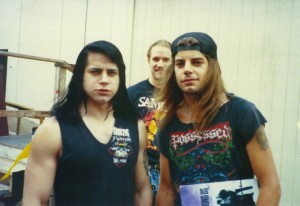 With Danzig in 1990. A couple decades later, I discovered the guy in the back is motorcycle enthusiast/semi-celebrity Jesse James who was working as Danzig’s security guy at the time.

None of that mattered in 1990, but then again, Glenn is only human (sorry to disappoint). Maybe he was having a bad day (which, of course, he’s entitled to). Or, maybe as Sugar Ray once sang, “Danzig (Just) Needs a Hug.”

All that said, I will always be a Glenn fan. His first two solo albums and his work with the Misfits and Samhain comprise a must-own catalog. Eerie, raw, pioneering and demonic, those works are the soundtrack to Halloween (or a satanic cult ritual).

As mentioned, Glenn is a man of few words and even less humor (at least with me). The quotes below are some of the more interesting bits from my 2004 interview when Evil Elvis was promoting his “Circle of Snakes” album and his Blackest of the Black metal festival. For the record, Glenn is always welcome in my home and stereo. No hard feelings, pal. Seriously!

On taking that notorious backstage punch from North Sides Kings singer
He was basically just trying to set me up for a lawsuit and I didn’t buy into it. I thought, “You know what? This could end up being a major lawsuit and I work hard to keep my money. I’m not giving it away to an idiot.”

On writing the song “Thirteen” for Johnny Cash
It was really cool because he just took me at face value. I think someone tried to bait him once in an interview and say, “What about the satanic stuff with this Danzig guy?” And he just said, “I don’t know about any of that. I just know I met him, he’s a really nice guy and he wrote me a really good song.” That’s the sign of a pro. A guy tries to bait him and he just rises above it.

If you haven’t seen the aforementioned “Punch,” go here.