Scorpions Guitarist Rudolf Schenker: ‘We Are Not Going To Retire and Go To The Beaches’

Like a lot of American heavy metal kids, I was first introduced to the Scorpions by way of their 1982 breakthrough album, “Blackout” and its now-classic smash single, “No One Like You.” As they ripped across the Alabama airwaves, the Scorpions sounded positively earth-shaking alongside the likes of Blue Oyster Cult and Molly Hatchet.

Within a year, Dad’s Air Force gig brought us back to my hometown of San Antonio where I briefly reconnected with an old friend who gave me a copy of the Scorpions’ 1979 LP, “Lovedrive” (I still have it). I liked it even better than “Blackout”! How was I so unaware? Must have been the band’s German heritage and limited U.S. exposure leading up to “Blackout.”

While acclimating to my new neighborhood, high school and overall life at age 15, I discovered legendary San Antonio radio deejay Joe “The Godfather” Anthony on 99.5 KISS FM and soon learned the Scorpions had a history of seven albums dating back to 1972 (all of which were more progressive, psychedelic and European-sounding than the made-for-American-radio “Blackout” and its closest predecessors, “Lovedrive” and “Animal Magnetism”). Make no mistake: In San Antonio circa 1983, the Scorpions were the underdog rivals of Iron Maiden and Judas Priest as one of the heaviest metal bands on the planet.

After graduating high school and college, I started landing legitimate bylines as an aspiring rock journalist and eventually got the chance to interview Scorpions guitarists Rudolf Schenker (twice) and Matthias Jabs. What follows is probably the best of the three interviews, conducted in 2010, with the ever-excitable Rudolf. “D’you people want to par-tay?”

Catch the Scorpions one last time
By David Glessner – Special to the Express-News Published 12:00 am, Thursday, July 22, 2010

Scorpions guitarist Rudolf Schenker was a rock star before he knew it.

“The first time I arrived in America was in 1978 because my brother invited me to visit him in Los Angeles,” Schenker said in his German accent. “He mentioned to me again and again ‘Rudolf, you guys have to come to the United States, because you already are big here. There is a band here in Los Angeles that covers Scorpions songs like “Speedy’s Coming” and “Catch Your Train.” The band is called Van Halen!’”

Stinging the world on a farewell tour that trots the globe for the next three years, the Scorpions rock the AT&T Center Friday night with special guests Ratt.

The Scorps, featuring founding members Schenker and vocalist Klaus Meine, along with longstanding guitarist Matthias Jabs and relative newcomers James Kottak (drums) and Pawel Maciwoda (bass), are capping a 40-year, 100-million-album-selling career with the new album, “Sting in the Tail,” that recalls the riffs of best-sellers such as “Blackout,” “Love at First Sting” and “Savage Amusement.” 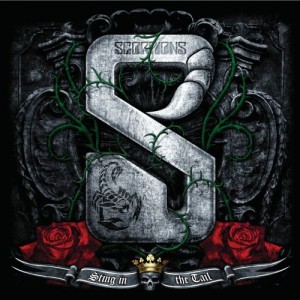 STILL STINGING: The Scorpions’ 17th album, ‘Sting in the Tail,’ combines all the best elements of the band’s late-’80s era to create a must-have for fans.

“When we started the album, nobody thought it would be the last,” Schenker said on the phone from a Nashville hotel room. “We went into the studio thinking we wanted to get back to the real essence of the Scorpions. We wanted great guitar riffs, great melodies and great vocals. Our manager heard it and said, ‘Hey guys, that could be a great last album, because how are you going to top it?’

“We thought at first he might be joking,” continued the 62-year-old Flying-V axman. “Then we started counting two to three years (for a tour), then we are 65! Then we take a break and start thinking about a new album and we are 67, 68! Then you are playing ‘Bad Boys Running Wild’ and ‘Rock You Like a Hurricane,’ and the only thing moving on stage is the lights! We want to leave on a high note, not a disaster.”

Since forming in Hanover, Germany, in 1969, the Scorpions have had more highs than lows. They quickly graduated from the club circuit and became headliners worthy of limos and security guards in Japan and Europe. Even the Scorpions’ first American gig was a dream come true despite taking the stage at 10 a.m.

“This was a festival in Cleveland in 1979 and we opened for Aerosmith, Ted Nugent, Thin Lizzy, Journey and AC/DC,” Schenker said. “We were only allowed 30 minutes, but we kept playing and the fans got more and more crazy. From this moment on we were the crazy Germans. It was fantastic to be part of the American rock scene.” 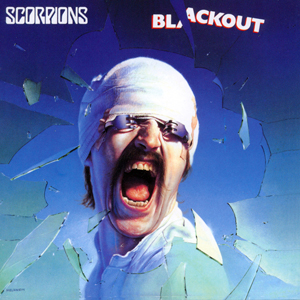 BREAKOUT: The 1982 ‘Blackout’ album finally put the Scorpions on America’s radar. And, no, that is not Rudolf on the cover.

While most of America waited until the Scorpions’ 1982 “Blackout” album to fully embrace the band, San Antonio radio had championed previous albums such as “Virgin Killer,” “In Trance,” “Taken by Force,” “Lovedrive” and “Animal Magnetism.” The mere mention of Alamo City still gives Schenker a thrill.

“San Antonio is one of our favorite cities ever, because it is pure rock ‘n’ roll,” he said. “We came back as headliners in ’82 with Iron Maiden and Girlschool, and that was the moment we knew we were kings in San Antonio. We are looking very much forward to going to the market place and the Mexican restaurant (Mi Tierra) and also the River Walk. San Antonio has been very important right from the start and we are very excited to rock again there.” 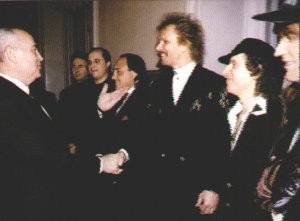 WINDS OF CHANGE: Rudolf meets Gorbachev in a mutual display of how music’s universal power can break down longstanding political and cultural walls.

In a career filled with highlights, Schenker says the standout milestone was watching the Scorpions’ 1990 song “Wind of Change” become the unofficial soundtrack to the fall of communism. The song earned an invitation to the Kremlin courtesy of Mikhail Gorbachev.

“It was the first time ever a rock band was invited,” Schenker said. “It was such a fantastic, historical highlight because we knew the Cold War was over and we saw what music could do. That is why Scorpions set out to be a rock band; to cross borders and come to different countries.

“Some people still have something against Germany because of the two world wars, so we wanted to show people there is a new generation. Our parents came with tanks, but we are coming with guitars and love and music.”

“Good question,” Schenker said. “We are not going to retire and go to the beaches. That’s too boring. We are going to do things that are creative and still a part of rock ‘n’ roll. I recently wrote a book called ‘Rock You Live,’ which is something I want to deliver to different countries. Also, of course, I am working on the Schenker Brothers guitar with my brother (guitar legend and Scorpions co-founder Michael Schenker), and we are talking about doing an album together. Also, I’m very much into car driving.

“You just have to open your eyes. The world turns around and every day is a new day.”