Motorhead: Getting ‘Hammered’ with Lemmy … And Sparing No F-bombs Along the Way! 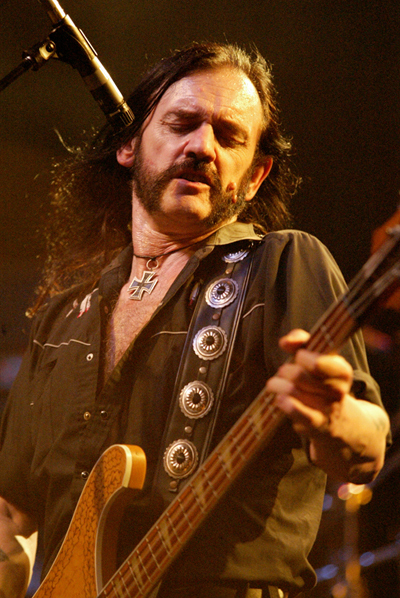 ‘TIL DEAF DO US PART: Among other things, Lemmy and Motorhead are known to make ears dial 9-1-1.

Looking for some candy-ass rock star interview? Then run from the room screaming! Looking instead for some unscripted, brutally honest, always hilarious and fully intelligent (if not a wee bit profane) insight from rock’s most enduring and uncompromising warhorse? Then stir up some Jack and Coke, have a seat and enjoy my 2002 Houston Press interview with Motorhead main man Lemmy Kilmister. And don’t say I didn’t warn you.

Motorhead front man Lemmy Kilmister certainly has a way with words. The sore-throated singer and bass guitar bruiser once described his band’s music as an amphetamine-driven fist of fury. Another of his pithy pronouncements had it that if he moved in next door, your lawn would die. End of story.

Decades later, the poetic punch lines have proven prophetic. As evidenced by Motörhead’s umpteenth album, Hammered, the band is still heavier than a burlap bag full of bullet belts and knuckle-dusters. It’s also a safe bet that Lemmy’s neighbors still quiver behind drawn blinds, praying the warts-and-all badass keeps off their grass. 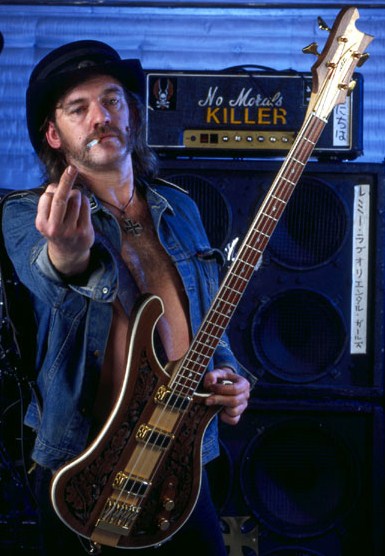 FREEBIRD: Never one to kiss anyone’s ass, Lemmy salutes the music biz in the only way he sees fit.

Who can blame them? Anyone with the power to unite such onetime enemies as punks and metalheads can be viewed only as a menace.

“We do rock and roll about chicks and panties and fucking roaring, killing, blood-smeared death,” Lemmy rasps without apology. As for bringing the Mohawk and metal crowds together, he says, “So did the Ramones, ya know? It was just the wrong haircut. But our music was so obviously not Judas Priest.”

And what of the Ramones’ recent induction into the Rock and Roll Hall of Fame?

“They’d be better off with a plaque from their favorite whorehouse,” Lemmy says. “They deserve so much better. The Rock and Roll Hall of Fame sucks big-time. It’s absolutely fucking awful. They have no clue about rock and roll. The biggest room in there is the gift shop!” 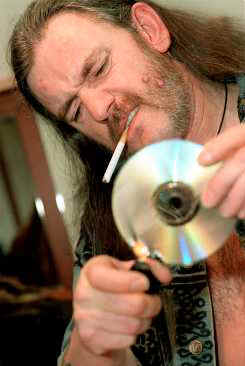 FIREPOWER: With his trusty cigarette properly lit, Lemmy turns his attention toward recycling the latest Nicki Minaj CD into something much more useful. Like an ashtray. Or a bunion scraper.

Like the Ramones, Motörhead is as anti-establishment as they come. Too honest and raw for radio and about as photogenic as the Elephant Man, Motörhead is the music industry’s undisputed ugly duckling, the lost cause that won’t get lost. Though he’s a contemporary of the newly kinder, gentler Keith Richards, Lemmy still lives up to the “Born to Lose — Live to Win” tattoo emblazoned on his arm.

“I can insult them much longer than they can insult me,” he says of industry types. “I’m pretty much at peace with myself. We’re supposed to be Motörhead. That’s what we do, and nobody does it better. For us to sit around and listen to those whiny, ass-kissing motherfuckers…I’d just as soon shoot myself, ya know? I won’t even let them into the recording studio when they come down with their 2.5 bloody kids. Get ’em out of here and lock the doors.” 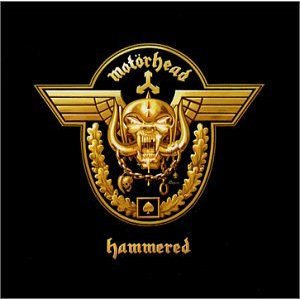 IF IT AIN’T BROKE: In the words of Lemmy, Motorhead’s aptly titled ‘Hammered’ is another fine, upstanding collection of ‘chicks and panties and fucking roaring, killing, blood-smeared death.’ Any questions?

The doors were rusted shut earlier this year when Lemmy and longtime comrades Phil Campbell and Mikkey Dee — Motörhead’s guitarist and drummer, respectively — banged out the aptly titled Hammered. It’s the band’s first album of new material since 2000’s We Are Motörhead. Two years may be a quick turnaround for most bands, but for Motörhead, it’s almost an eternity. “We’ve been working on this album and touring” overseas, Lemmy explains. “Motörhead’s a rock band. We don’t fuck around in the studio. Actually, for the first time in my life, I had three months” off the road.

Hammered leans more toward darker themes of war and retribution than Lemmy’s wickedly humorous tales of mooching Bon Jovi’s booze or table-hopping at L.A.’s trendy Rainbow Bar & Grill. “Hammered‘s a bit more English,” he says of the album’s dark tone. “I don’t know what it is, but I know what you mean.” 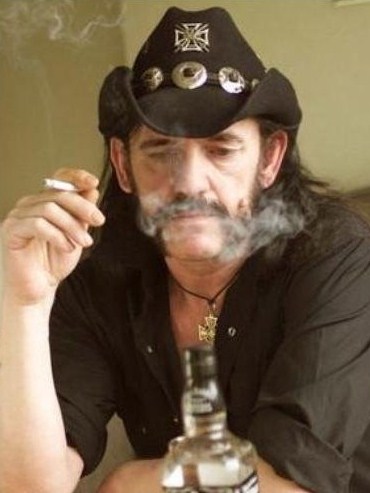 EMPLOYEE OF THE MONTH: Lemmy contemplates another shot of Jack during his lunch break from JCPenny.

It’s also another excuse for yet another punishing tour. To paraphrase some of Lemmy’s classic lyrics, speed don’t kill and Motörhead’s the proof. It’s a sentiment that’s also echoed in the title of the band’s classic live album, No Sleep ’til Hammersmith.

“I’ve been on the road in a fucking little shelter with one wall missing and the rain and the wind coming in,” Lemmy says, audibly exhaling another throat-charring cloud of cigarette smoke. “You think to yourself, ‘Fuck this shit!’ But if you’ve got a couple of pals with you, it’s the best time of your life to write songs, because you don’t remember the rain and shit and the freezing cold. You just remember the companionship. If you have a job at JCPenny, you’re not going to remember much from that. ‘Yeah, the manager came down and shook fucking hands with me!’ Whoa! Fucking hell! If that’s your life, show me another.” 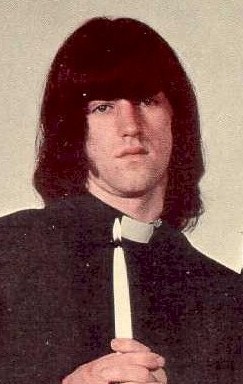 BLESSING IN DISGUISE: A young Lemmy in an early publicity photo as a member of the Rockin’ Vickers.

Lemmy’s life began in the English Midlands as Ian Kilmister, a vicar’s son and a fan of the Beatles and MC5. Determined to make music his destiny, young Ian later became “Lemmy” (for his supposed habit of asking friends to “lemme a fiver”) and landed work as a roadie for Jimi Hendrix during the hippie heyday.

“It was a very special time,” Lemmy recalls. “We discovered the Pill and acid at the same time. Then we got Hendrix and Sgt. Pepper and all that stuff. If you can say you remember it completely, you were with the wrong crowd.

“We did a whole [Hendrix] tour, and it was only two of us rolling around his equipment. We’d use the house PA and just gear up and go. No mikes on the drums, no fucking nothing in those days, and all that good music came from that. You think about that for a minute. It doesn’t have to be all electronically perfect and digital. In fact, that’s part of the death of rock and roll. It’s not supposed to be clean, you stupid bastard! It’s supposed to be raunchy and fucking sleazy and looking up your skirt, ya know? That’s rock and roll.” 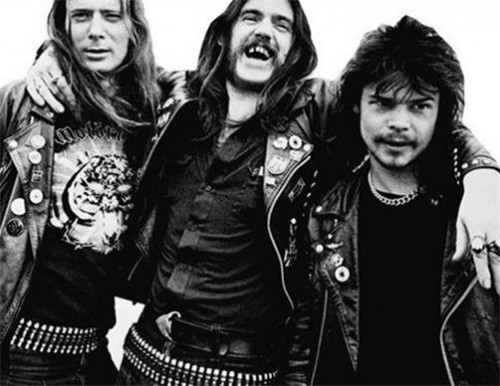 After a brief stint in Hawkwind, a psychedelic metal band, Lemmy formed Motörhead in 1975. The classic lineup featured guitarist “Fast” Eddie Clarke and drummer Phil “Philthy Animal” Taylor. In no time, Motörhead was reviled as the worst band in the world. While the image of Lemmy wearing mirrored shades and growling upward into an overhead mike was frightening enough, what came out of the speakers and amps was deemed even more repulsive. Still, the denim-and-safety-pin crowds marveled at Motörhead’s ability to offend with such classic underground albums as Overkill, Bomber and Ace of Spades. A young Lars Ulrich was enamored enough to serve as president of Motörhead’s West Coast fan club before becoming the drummer for Metallica; Motörhead’s god-awful growl also helped spawn the likes of Slayer, Megadeth and Anthrax. 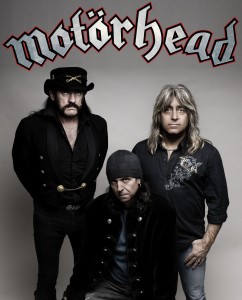 ACES HIGH: The long-running current lineup, from left, is God, guitarist Phil Campbell and one of the best drummers in the world, Mikkey Dee

Lemmy’s debauched existence is as legendary as his band. If what doesn’t kill him ultimately makes him stronger, Lemmy will be smoking, drinking and imbibing sordid and sundry substances from here to eternity.