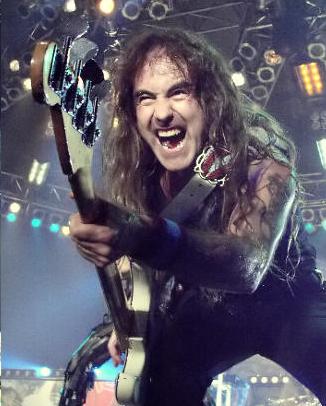 BEAST MASTER: Not only is Steve Harris the visionary and co-founder of the almighty Iron Maiden, he also ranks as one of heavy metal’s elite bass players (arguably the very best).

“It was a mutual decision,” bassist Steve Harris said of Bayley’s departure and Dickinson’s reinstatement. “(Bayley) wanted to do a solo thing and he’ll have an album out at the end of the year. He’s happy and so are we.”

As a bonus, former Maiden guitarist Adrian Smith is also back, although not at the expense of longtime replacement Janick Gers. The duo is complemented by founding guitarist Dave Murray, bringing the total of guitar shredders to three. Veteran drummer Nicko McBrain rounds out Maiden’s galloping sound. 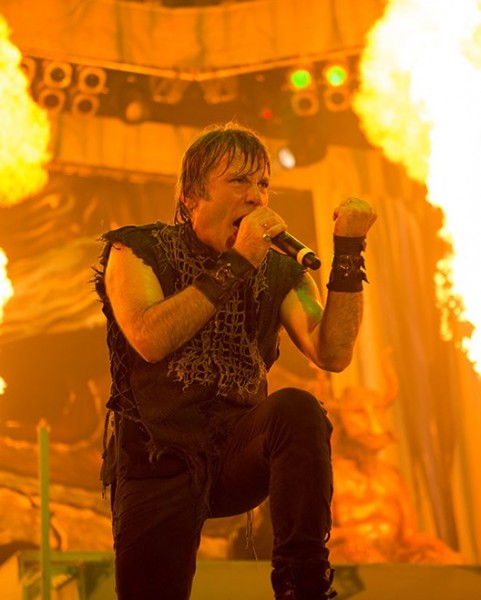 HE HAS THE FIRE, HE HAS THE FORCE: Hyper-athletic frontman Bruce Dickinson reigns as one of metal’s most operatic voices

“When Bruce came back, a lot of people weren’t surprised,” Harris said, phoning from France. “Adrian coming back and keeping Janick surprised people. Having three of them actually makes things a little heavier. They spread (the guitar solos) out pretty evenly.”

Dickinson, who recorded the solo album “Tattooed Millionaire” in 1990 while still fronting Maiden, eventually left the band in 1993 for a full-time solo career that steadily gained momentum – especially when Smith turned up to play guitar in recent years. As fate would have it, both were destined to return to the band they helped turn into a globe-trotting, multimillion-selling act that is rightly praised as one of metal’s most influential.

“We had a meeting with Bruce at the end of January and we weren’t sure which way things were going to go,” Harris continued. “There’ve been big rumors about Bruce’s return for some time, but we adamantly denied them, because at the time, they weren’t true. Unbeknownst to us, the fans were right. They must’ve had a crystal ball or something.” 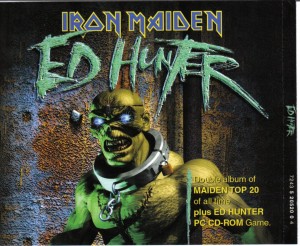 ED BANGER: Maiden’s interactive, double-disc CD offers an audio and visual journey through the dark side.

Supernatural powers aside, Maiden’s latest release is a glimpse into the future as well as the past. “Ed Hunter” is a double-CD greatest-hits package with an added interactive PC game that allows players to interact with Eddie, Iron Maiden’s eternal, rotting corpse mascot.

Those covers began frightening the world in 1980 when Iron Maiden’s same-titled debut was released. The cover art featured a screaming, glowing-eyed Eddie, who mutated and reappeared on subsequent albums such as “Killers,” “The Number of the Beast,” “Piece of Mind” and the double-live opus, “Live After Death.” 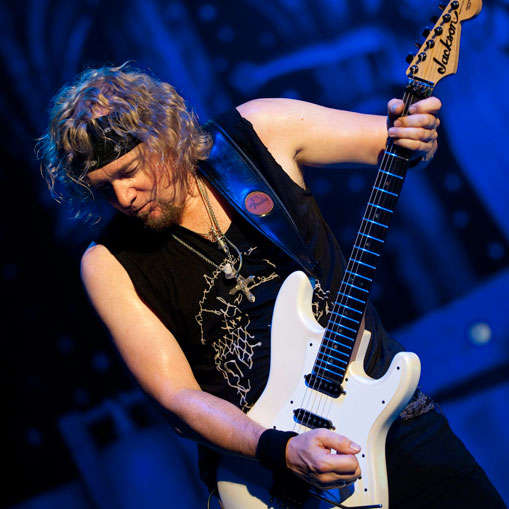 YO, ADRIAN!: Along with co-guitarist Dave Murray, Adrian Smith is responsible for some of metal’s most blistering dual guitar solos

By the time Dickinson replaced original vocalist Paul Di’Aanno in time for 1982’s “The Number of the Beast” album, Maiden’s grotesque cover art, headbanger image and literate lyrics of war, mythology and history had religious zealots in a clatter. The ludicrous charges of devil worship are long gone in the age of Marilyn Manson and Rob Zombie.

“We put a backward message on ‘Piece of Mind’ and people went over the top,” Harris said. “I don’t miss it at all. Someone else can take the heat.”

Maiden took some heat of its own in recent years, especially from American fans who had a difficult time accepting Bayley in place of Dickinson. The band’s last San Antonio appearance was peppered with boos as Bayley and the boys played more recent, expansive material rather than the wealth of fire and brimstone classics Maiden has at its disposal.

“It was bloody hot, I remember that,” Harris said of last July’s concert. “I thought we were brave doing a lot of stuff off the new albums. We were doing those songs all over the world and it was going great. In America, the albums didn’t (sell) as well and when people don’t know the material, they’re a bit bewildered. We thought it was the right decision. We didn’t’ want to do a best-of (set). We’re doing that now.”

SIDEBARS:
Dave’s digit: Iron Maiden guitarist Dave Murray fractured the little finger of his left (fretting) hand in an on-stage fall during the encore July 30 in Los Angeles. Shows were cancelled in San Jose last Saturday and Las Vegas Monday, but the tour reportedly was back on track as of last night in El Paso.
Bruce’s birthday: Bruce Dickinson’s return to San Antonio will be doubly triumphant s the singer celebrates his 41st birthday Saturday. Born Paul Bruce Dickinson in 1958, the British fencer, pilot and Deep Purple fan first gained fame in the new wave of British heavy metal band Samson before he won the job as Paul Di’Anno’s replacement in Iron Maiden in 1981.
Opening Acts: Pushmonkey and Puya