Talk Among Us: My interview with Jerry Only 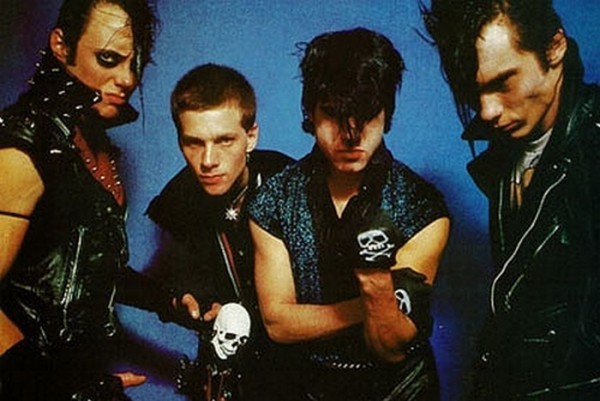 My introduction to the Misfits came courtesy of Metallica. Until I saw the pimply-faced Metallicats wearing Misfits shirts in magazine photos, I had no clue about the greaser-ghoul punks from New Jersey. It was circa 1984 and if the Misfits were good enough for Metallica, then I owed it to myself to start digging.

Given the Misfits’ cult status and short-lived lifespan, there wasn’t much to find. The only semi-readily available albums were “Earth A.D.” and “Walk Among Us.” I’d later add the horrible-sounding, low(er)-budget “Evilive” and two other post-breakup compilations, “Legacy of Brutality” and “Misfits” (which arguably were all made available following Metallica’s very public endorsement). All the albums were crap-budget productions, but that only added to the Misfits’ raw sound and underground, horror-comic shtick. No wonder Metallica loved them! 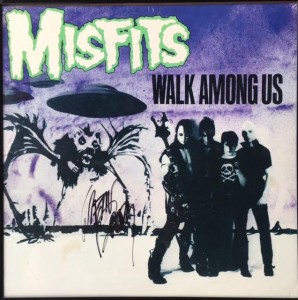 DAN-SIG: My well-worn copy of ‘Walk Among Us’ signed by Glenn Danzig.

Sharing my love for the Misfits was my lifelong friend Al Kelly who prided himself on listening almost exclusively to the hardest-thrashing metal and breakneck punk bands. As far as Al was concerned, Judas Priest was for wussies. He favored Kreator, Voivod and, of course, the Misfits. One of our favorite rituals was to sit in his broken-down, black Dodge Maverick and slur along to “Where Eagles Dare,” “Bullet” and “Teenagers from Mars.” It was sloppy, good fun.

The Misfits were history by the time Al and I fully discovered them, but they’d eventually reform (for better or worse) giving me the opportunity to interview bassist Jerry Only in 1997 for the San Antonio Express-News. 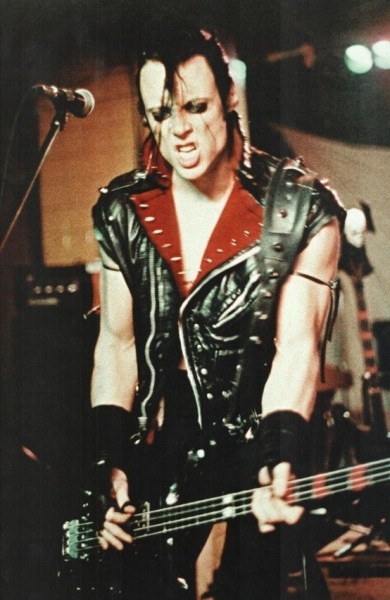 THE ONE & ONLY: An early action shot of Jerry Only wearing his Sunday best.

MISFITS RETURN FROM THE GRAVE WITH NEW SINGER
By David Glessner
Special to the Express-News; Wednesday 8/27/1997

When the Misfits called it quits following a Halloween gig in 1983, they left behind a legacy of ghoulish makeup, guitars that looked like weapons and ultra-fast punk-rock songs that celebrated alien invasions, demonic possession, dismemberment and cannibalism.

“We call it a disease and we try to infect anyone we can, ” said bassist Jerry Only, laughing as he discussed the Misfits’ obsession with the macabre. “It goes back to when we were kids watching ‘Chiller Theater.'”

After a prolonged legal battle with former singer Glenn Danzig over the use of the Misfits name, punk rock’s musclebound zombie squad is back from the grave with a new album and lineup. Hailing from Lodi, N.J., the Misfits descend on the Sunken Garden Theater on Thursday. Second-billed behind headliner Megadeth, the band will rip through 26 songs during a frenzied 50-minute set. “We got it down to a science, ” Only said. 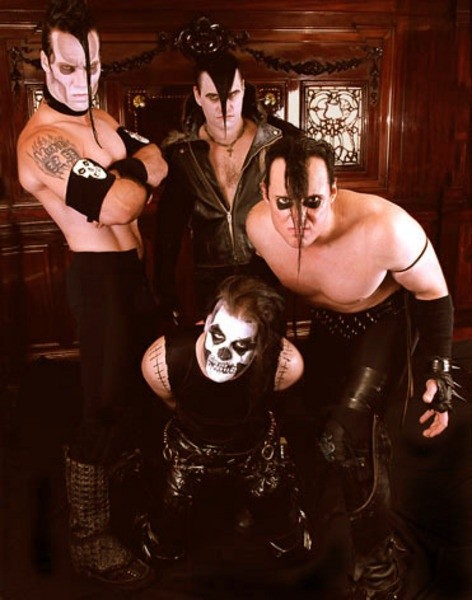 Corrosion of Conformity and Machine Head also are on the bill. Tickets are $22.50 through Ticketmaster.

As the band’s founding member, Only asked Danzig to rejoin the Misfits and bury the hatchet after years of bickering.

“We won our (legal) battle and I thought I could be on a real power trip or I could do the cool thing on behalf of the fans and ask him to join,” Only said, his Jersey voice quickening to hyperspeed. “He had us thrown out of his hotel so we took that as a ‘no.'”

Taking over lead vocals is 22-year-old Michale Graves, whose voice at times can recall Danzig’s evil-Elvis impersonation. The band is completed by Only’s younger brother and longtime Misfits guitarist, Doyle, and new drummer Dr. Chud. Besides playing music together, the fearsome foursome also lifts weights together.

“Everyone works really hard,” the 38-year-old Only said. “Michale likes to sleep late, that little son-of- a-gun, but he’s a kid. He’s supposed to be wild and crazy.” 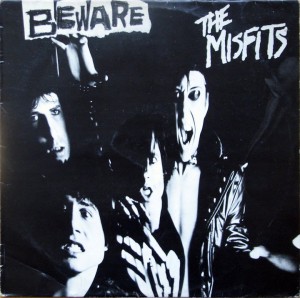 Since the band’s demise, the Misfits have become one of the most-collected rock groups ever. The band’s leering Crimson Ghost logo is legendary, and its early recordings are treasured by members of the Misfits fan club (a.k.a. Fiend Club). The mighty Metallica cited the Misfits as a major influence, recorded a cover of “Last Caress/Green Hell” and subsequently introduced the band to legions of new fans. A recent tribute album, “Violent World,” has many of today’s top punk bands covering favorite Misfits tunes.

“The collectibility is out of control,” Only said, acknowledging that Metallica kept the band’s name alive. “Our original records go for more than Elvis’ original records. To me that’s absurd. Of course we had less volume than Elvis. We have one record called ‘Beware’ with ‘Last Caress’ on it that’s an import from England which sells between $500 and $1,000. I don’t condone that. I gotta say I’m very proud of the fact that someone thinks that highly of one of our original records, but if I got a 15-year-old kid who’s working all summer mowing lawns, I don’t want him subjected to (paying top dollar).” 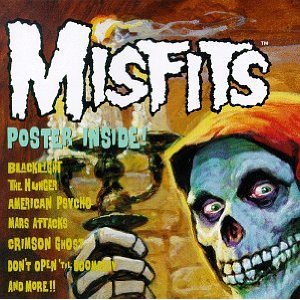 “American Psycho,” the Misfits new album on Geffen Records, is a much more affordable option. As expected, it’s a fist-pumping, shout-along album chock-full of guts, gore and the band’s “fattest, meanest, rippingest” sound to date, Only said.

But what will diehard fans think of their underground favorites signing to a major label and releasing a properly produced album? Will the band’s mystique be damaged?

“You want the truth?” Only asked, before concluding the interview so he could take his son to football practice. “Yes, it would definitely damage us if we stunk. I think our album’s great.”

Sidebar
From 1978 through 1983, the Misfits released numerous singles, EPs, a live album (“EviLive”) and two full-length Lps (“Walk Among Us” and “Earth A.D.”). The full-length releases are fairly common, as are subsequent compilations (“Legacy of Brutality,” “Misfits Collection 1 and 2,” and a coffin-shaped box set), but many of the band’s original, early releases on the Plan 9 label are considered rarities. – David Glessner