Like all good fathers, my Daddy taught me well. From throwing a spiral and standing my ground to opening doors and respecting our soldiers, Dad handed down the skills and wisdom that got me from boy to man.

He also influenced me in subtler ways like playing the greats of country western music when I was but a wee lad. Merle Haggard, Johnny Cash and George Jones shared our 1970s living room speakers (remember those?) with Waylon Jennings, Charley Pride, Loretta Lynn and Willie Nelson. Dad would be the first to admit a Telecaster might be a fishing pole, but his casual music preferences left an indelible impression on his future rock-n-roll journalist. 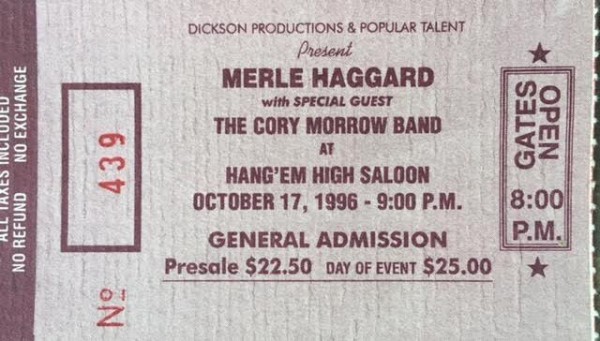 PAYBACK: Nearly three decades after I was born, I took Dad to see ‘The Hag.’

Of them all, Merle Haggard was my favorite. Sure, the songs were memorable enough, but it was the cautionary, and sometimes confrontational, drawl of the lyrics that let you know Merle had been there, drank too much, served his time and learned his lessons the hard way. Or maybe not at all.

There was also the simple, yet elegant sadness that cracked his hard-boiled exterior to reveal a man who was just a man. Merle sang of emotions we all know and hate, but could never put into words. At least not in that crusty, poetic way that puts a lump in the most hardened of throats and drains another shot glass.

When Merle died on his 79th birthday earlier this week, a piece of my childhood passed with him. Thanks for the music and memories, Merle. And thank you, Dad, for introducing me to the outlaw, barstool genius we lovingly call “The Hag.”