By Metal Dave
(The following originally published in the San Antonio Express-News, 6-26-2004)

Juliette Lewis is on the phone sounding every bit like one of her flirty, fun and yet scary Hollywood movie characters.

The topic is not acting or past films with Robert DeNiro (“Cape Fear”), Brad Pitt (“Kalifornia”), Woody Harrelson (“Natural Born Killers”) or Johnny Depp (“What’s Eating Gilbert Grape”). The business at hand is punk rock, the Vans Warped Tour and Lewis’ debut in both as the vampish lead singer of her impressive new band, Juliette and the Licks.

“What’s so great is I’ve always had the odds against me, even in my (acting) profession,” she says. “I’ve never been the popular girl. I’m really used to proving myself. I like naysayers. I like people to doubt me. I’m cocky as hell, but in the right way (laughs)!”

Juliette and the Licks are supporting their debut album, “Like a Bolt of Lightning.” The punchy eight-song album (“It’s not an EP, dammit, it’s a short album,” Lewis said, laughing) is spiced with the sounds of the Stooges, Dead Boys, David Bowie and the Clash.

“It was really important on this first album that it be un-produced-sounding,” Lewis says. “I was inspired by Iggy and the Stooges and the Dead Boys and those bands that work within their limitations. We just had a week to record. I got a mix I was happy with and it got kind of a live vibe.” 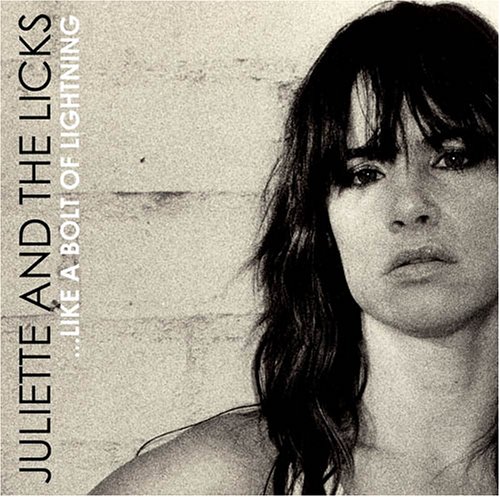 LICK IT UP: Lewis’ debut album was inspired by vintage 1970s punk rock.

Juliette and the Licks features H20 guitarist Todd Morse, former Hole drummer Patty Schemel, bassist Paul III and Austin-based guitarist Kimball, formerly of the Rise. The 30-year-old actor, who name-checks Blondie, the Pretenders and Prince as additional influences and speaks favorably of newer acts such as the Darkness and Velvet Revolver, has been fronting Juliette and the Licks for about a year and a half, but has yet to perform in front of Warped-sized crowds.

“I’ve never worked in an outdoor venue in 100-degree heat, so I’m hoping to do a good job,” she says.

Lewis says putting the band together was pleasantly devoid of the usual actor-starts-a-band doubt and stigma.

“I can talk a good game and I’m completely, crazily passionate about (the music),” she says. “The kind of actor or actress I’ve been has always been pretty raw and unpolished, so that kind of lends itself to rock ‘n’ roll.”

Can she continue to avoid the rolling eyes that greet most actors-turned-rockers? Judging by her respect for her influences, her real-deal attitude and the rowdy rhythmic romps on “Like a Bolt of Lightning,” Lewis stands to break the mold.

“I know for me I like to lose myself,” she says. “Even in acting, it’s such a challenge to not be so self-conscious and just lose yourself and not be vain. This is a generalization, but I think sometimes actors suffer from vanity and that is really going to be exposed when you get up there on stage and you’re trying to do music.”