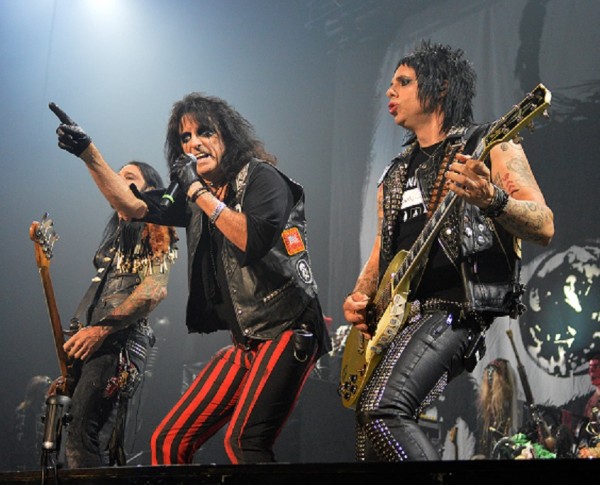 NICE GUY: Alice Cooper welcomes you to his nightmare (photo by David Castillo)

Curse words are hardly shocking when spit forth by Motley Crue, but when the F-word in question is a sworn farewell, there is suddenly cause for alarm (or celebration if you’re so inclined).

Stopping last night at the Cedar Park Center for what’s being billed as the “All Bad Things Must Come to an End” tour, the notorious hair-metal glam band swears this is the final bow. If so, it was a rowdy party made even better by melodic mop-tops the Raskins and special guest Alice Cooper. Give the Crue credit for having the guts to invite such a formidable legend.

Taking the stage in black-smudged eyes, Alice tightened his set into a no-time-to-waste lesson in momentum. Efficient and dripping with rabies, his backing band was a leather-and-studs vampire squad that delivered “No More Mr. Nice Guy,” “I’m Eighteen,” and “Under My Wheels” with assassin-like precision. As for Alice himself, his gorgeously wretched voice and corpse-skinny frame still packed the same venomous snarl and menace that scared the bejesus out of Mom and Dad back in 1973.

In a word, Alice and his band were killer – especially when his guillotine, ghouls and boa constrictor lent their shock and awe to “The Ballad of Dwight Fry,” “Welcome to My Nightmare,” “Billion Dollar Babies” and a set-closing “School’s Out” — which perfectly oozed into Pink Floyd’s “Another Brick in the Wall.” It was an eye-popping display of choreographed, yet somehow, spontaneous theatrics (including Cooper’s electrocuted transformation into a 12-foot zombie during “Feed My Frankenstein”). The crowd just loved it to death. You had to be there.

With marching orders from Uncle Alice, Motley Crue hit the stage with a big bang of pyro, lava-hot go-go girls and let’s party bravado. Nothing new there, but hey, if it ain’t broke … To his credit (for those keeping score), singer Vince Neil sang more than wheezed. He got plenty of high-pitched help from his near-naked back-up gals, but did the job better than years past as he powered his Crue through “Wild Side,” “Primal Scream,” “Looks that Kill” and “On With the Show.”

Had they scrapped the non-Eddie Van Halen guitar solo and bassist Nikki Sixx’s long-winded recap of the Crue’s history, L.A.’s baddest bad boys could have dug deeper into debut album “Too Fast For Love” and obscurities like “Toast of the Town” and “Stick to Your Guns.” If this is goodbye, why not blast some rarities instead of Sex Pistols and Brownsville Station covers?

Guitarist Mick Mars muffed the intro to “Shout at the Devil” and Neil had to ask if the crowd was still with him after the whine-and-cheese ballad, “Without You,” but overall, Motley Crue gave the fans what they wanted, namely scream-and-grind rock-n-roll, including drummer Tommy Lee’s hang-from-the-rafters drum solo (which oddly enough featured a vocal sample from John Corabi who replaced Vince Neil for a couple years).

The finish-line sprint of “Livewire,” “Too Young to Fall in Love,” “Girls, Girls, Girls” and a fist-bumping escort through the crowd that landed the band on a mini-stage for “Home Sweet Home” was indeed pretty sweet. Goodbye or good riddance, Motley Crue left a decent bruise.