Attention Shoppers! ‘They Just Seem a Little Weird’ Unmasks the Hidden Players Who Helped the Music do the Talking 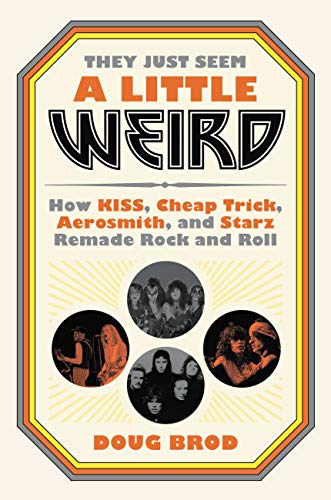 For those of us who still have our KISS records out (at age 50-something), Doug Brod’s “They Just Seem a Little Weird,” offers a highly entertaining, behind-the-amps tour of the 1970s arena-rock connections, rivalries, misfires and grand designs linking the “hottest band in the land” to Aerosmith, Cheap Trick and the cultishly influential, yet eternally dimmed Starz.

Based on more than 130 interviews, “They Just Seem a Little Weird” weaves together the stories of how these four American bands and their shared producers, managers and promoters captured the teen spirit of a younger generation who found their older siblings’ Led Zeppelin and Deep Purple hand-me-downs lacking energy, visual appeal and, well, fun!

Excepting Starz, of course, Brod’s subject bands have been extensively documented, but never from such a genealogical perspective. And therein lies the geeky rock candy. How did KISS, Aerosmith and Cheap Trick leverage their behind-the-scenes alliances to rocket to superstardom? Why did Starz — a band that had all the ingredients of the other three – not blast off? (Hint: Physical violence is probably a no-no).

Beyond the 1970s, all four bands were faced with stiff competition from the genres they inspired – namely hair metal and grunge. Once again, the incestuous pool of allies and incoming songwriters (Desmond Child, Diane Warren) took the calls to remake and reintroduce the bands with varying degrees of success (or not so much as a glimmer).

Brod’s 300-plus pages are deftly balanced, keenly paced and flavored with an infectious peer-to-peer enthusiasm. While its focus caters to the backstage curiosity of a certain fanbase, “They Just Seem a Little Weird” also provides a revelatory peek into the microcosm of off-stage movers and shakers who represent the broader scheme of making or breaking music biz careers.

As his debut book, “They Just Seem a Little Weird” earns Brod a boot-stomping round of applause. Let’s hope he returns for an encore.

“They Just Seem a Little Weird” is available at https://amzn.to/376HHlg and https://www.hachettebooks.com/titles/doug-brod/they-just-seem-a-little-weird/9780306845192/

About the Author: Doug Brod is the former editor in chief of SPIN magazine and was a long-time editor at Entertainment Weekly. He has worked for Atlantic Records, taught at New York University, and was a segment producer of the comedy/music television series Oddville, MTV. Brod has also written for the New York Times, Billboard, Classic Rock, The Hollywood Reporter, and The Trouser Press Record Guide. A native New Yorker, he lives with his family in Toronto.