Review: Heaven Below Conjures the Gods on “Rest in Pieces” 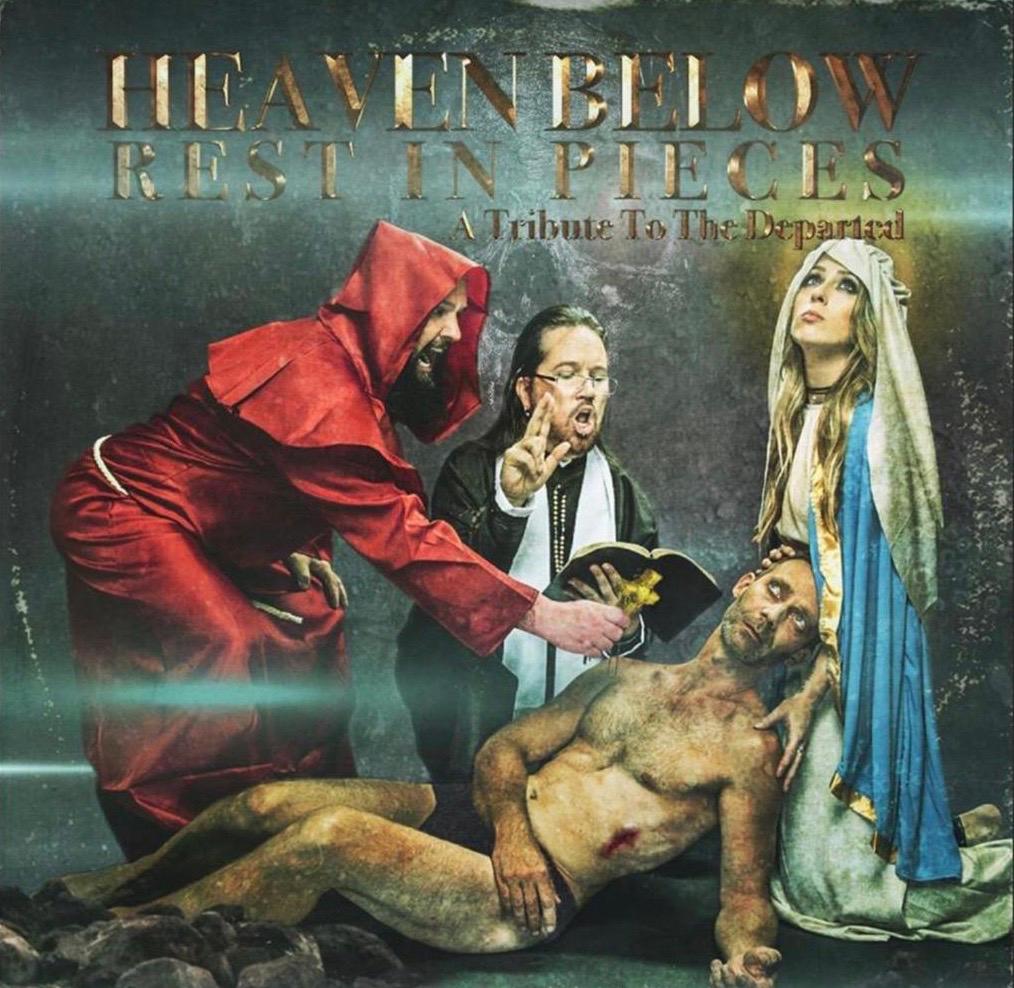 On “Rest in Pieces: A Tribute to the Departed,” Los Angeles-based metal band Heaven Below dares to tread the hallowed ground of some of rock’s greatest lost souls.

While frontman Patrick Kennison is rightfully known as a formidable guitarist (his boss, Lita Ford, would agree), each passing Heaven Below album serves notice he’s also ready to take a bow as an equally accomplished vocalist.

On “Rest in Pieces,” Kennison takes on Chris Cornell (“Like a Stone”), Ronnie James Dio (“Hungry for Heaven”) and Rob Halford (“Desert Plains”), among others. Delivered with convincing effect, Kennison succeeds not so much in matching these impossibly gifted singers (who can?), but by knowing instead how to properly respect them within his own exceptional range while still adding enough personalized nuance, in-the-pocket restraint … and delivering with justice for all.

Likewise, the band – guitarist Nikki Stringfield (the Iron Maidens), bassist/vocalist John Younger and drummer Shad Wilhelm — breathes new fire and soul into an eclectic mix of songs that runs from Johnny Cash’s “Ain’t No Grave” to Pantera’s “Revolution is My Name.” In lesser hands such fearless ambition could come across as disjointed or doomed. Not here.

Case in point is “Down in a Hole” by Alice in Chains. A wallowing beauty in its original form, the song is given new layers of haunting despair as Heaven Below adds ghostly female harmonies, piano/keys in place of guitar picking and descending vocals in places where Layne Staley aimed for heightened levels of anguish. Against impossible odds, the new twists and sparse arrangement add up to a stunning take on a sacred original.

Another track that gets stripped to a more powerful wallop is Linkin Park’s “Crawling.” By deleting the original’s (admittedly subtle) nu-metal/rap elements and relying only on piano and Kennison’s soaring, let-it-bleed vocals (complemented again quite nicely by Stringfield’s ethereal harmonies), the song is transformed into an emotional gut-punch of goosebumps and pain. It’s arguably the highlight of “Rest in Pieces.”

“Desert Plains” by Judas Priest (great choice!) is another highlight that takes a brave, new approach. While it retains some of the signature dynamics and atmospheric vibe of the original, Heaven Below gives it the quiet treatment as it weaves and floats on a bed of acoustic guitar and lush vocals. Absolutely majestic!

Reworked to the opposite extreme is Queen’s “We Will Rock You,” which is torqued into a hard-charging, heavy metal growler armed to the teeth with ripping guitar solos. Also on the heavy side is “Motor Medley,” a slam-bang stampede through Motorhead’s “Overkill,” “Iron Fist” and “Ace of Spades” featuring Younger on vocals and Wilhelm on churning, machine-gun drumming (ditto on Pantera’s “Revolution is My Name”). The Ramones, of course, have always been built for speed and Heaven Below adds another gear to “Somebody Put Something in my Drink.”

Even the few songs that stay faithful to the originals deserve props for selection. Who scratches beneath the obvious to cover AC/DC’s “Touch Too Much?” And who can possibly tire of INXS’s “Don’t Change?”

Sure, covers albums are dicey affairs. They either fall into the carbon-copy category of “What’s The Point?” or, even worse, the blasphemous “What Were They Thinking?” To Heaven Below’s credit, “Rest in Pieces” offers something fresh, interesting and skillfully played at every turn. It is, indeed, a tribute of the highest order.

For more Heaven Below, go here.