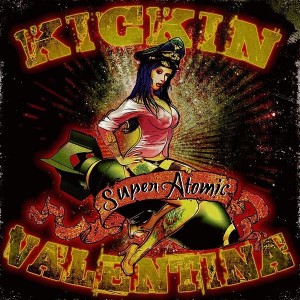 Gruff and nasty, these Atlanta-based, raunch-n-rollers are back with their second platter, “Super Atomic.”

Opening with “Sermon,” which is actually a mini-narrative about the corrupting evils of rock-n-roll, the six-song “Super Atomic” gets banging with “On My Side.” A bazooka blast of hard-drumming thunder and biker-boot stomp, there’s not a door left on the hinges when this one rattles to a halt. Holy mother of Molotov!

Next up is lead single and video, “Wrong Way.” A smoldering, mid-tempo tune that never really ignites (although it sorta, kinda grows on you after repeated listens), “Wrong Way” is hardly the most exciting song here, but likely got the nod as lead single due to its grinding, more universal dance-ability.

“When You’re Gone” finds Kickin Valentina back up and swinging on a groove that semi-recalls Motley Crue’s “Wildside” until the floating chorus and (subtle) keyboard stabs swerve it into its very own memorable identity. “Fist N Twist” follows with a frantic, punk-ish approach that  — despite the questionable title and chorus — makes for a great, Broken Teeth-style adrenaline punch. A real shouter, this one!

The title track, unfortunately, is riddled with overbaked lyrics (“designer jeans,” “spray tan,” “Daddy’s cash”), but musically and vocally, “Super Atomic” is a melodic bombshell that vibes like something from The Cult’s “Sonic Temple” or Alice Cooper’s “Trash.” Great singing and a swaggering groove make it diabolically impossible to shake.

And then? Oh, boy, here comes “Some Kind of Sex.” Again, a contagiously crushing song hobbled by lyrics so blatantly “naughty” (“condom in your hair?” “I’m doing your best friend,” “we’re all just f**kin’ whores!”) they come off like Steel Panther minus the intentional wink. Yeesh! Props, nonetheless, for mega-ton riffage.

It has to be said that singer Joe Edwards is badder than Samuel L. Jackson’s wallet. With a star-making voice that’s soulful, husky and seemingly scarred by corrosive excess, this guy’s vocals are the stuff of hard-rock wish lists. I’m talking, WOW! Dude gets my vote for best new singer.

Like the self-titled 2013 debut EP (with added roaring production), “Super Atomic” is way more blast than bomb and further proof that Kickin Valentina is a serious contender. The talent, ‘tude and vocals are all a slam-dunk if they can just raise the bar on lyrics and maybe deliver a full-length, 8- or 10-song album next time. Until then, I’m still on board and paying lots of attention. You should, too.

* Overall Grade: B-
* Favorite Tracks: “On My Side,” “Super Atomic”
* For Fans of: Hardcore Superstar, L.A. Guns, mirror shades and double-fisting at last call

For a review of Kickin Valentina’s debut EP, go here. For new single/video for “Wrong Way,” click below.