In town during SXSW 2004, but not scheduled to perform, the Finnish singer was merely passing through, but nonetheless happy to oblige a few stray interviews to promote the latest Hanoi Rocks album, “Twelve Shots on the Rocks.”

Working off a tip from publicist Brandon Stratton, my wife and I rode up the hotel elevator and knocked on Michael’s door. Brandon answered wearing a Hellacopters T-shirt and asked us to wait in the hall for a few minutes while Michael wrapped up a previous interview. I remember feeling sick and queasy from consecutive nights of SXSW, but excitement was finally coming to cure me.

Michael, of course, is an iconic rock-n-roll legend who is worshipped by Guns N’ Roses, Skid Row and basically the entire 1980s hair-metal genre. He also carries a heavy dose of punk-rock street-cred, which made me the envy of all my gutter-rat friends who knew I was booked for some face time. As my urge to vomit subsided, Brandon returned and waved us in. 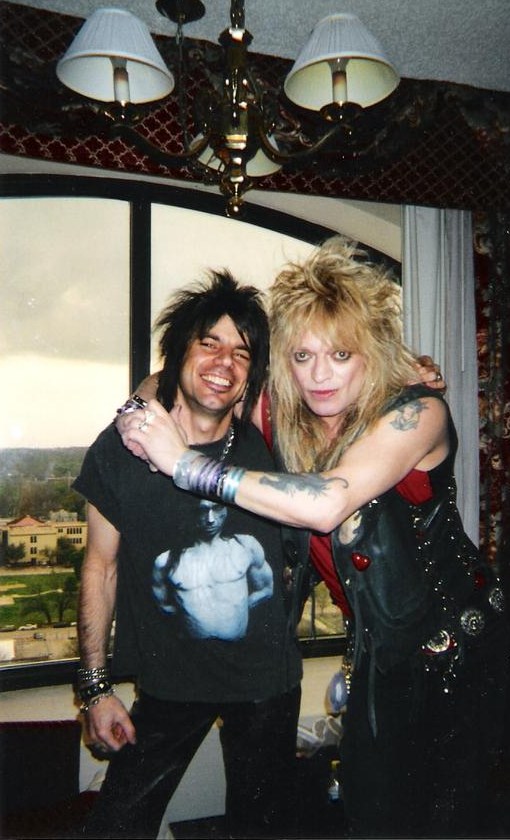 ROOM SERVICE: In Michael’s hotel room. The man is a 24-7 rock star who didn’t mind my pathetic request for a second round of photos.

Expecting Michael to be dressed-down on his rare day off from the stage, I was surprised to find him glammed to the max in all his black-leather gypsy regalia.

Wow! This is how he looks when he’s holed up in a hotel room with nowhere to go? Really? Now THIS is a turbo-charged, superhero ROCK star! Surely, he must at least have a photo shoot today (I think he did … but trust me, the glitz is permanent).

Michael’s hair was perfectly ratted; his jewelry was a-clinkin’ and a-clankin’; and his flawless makeup could have turned Dolly Parton three shades of green with envy. The man was a marvel of gravity-defying swagger and cool.

And could he have been any nicer? Actually, no. I rolled tape and asked questions for an hour as Michael charmed the living crap out of me and my wife. If Michael was a disease, he’d be highly contagious — and certainly terminal. What a gracious host. We finished the interview, took the obligatory photos and said adios. 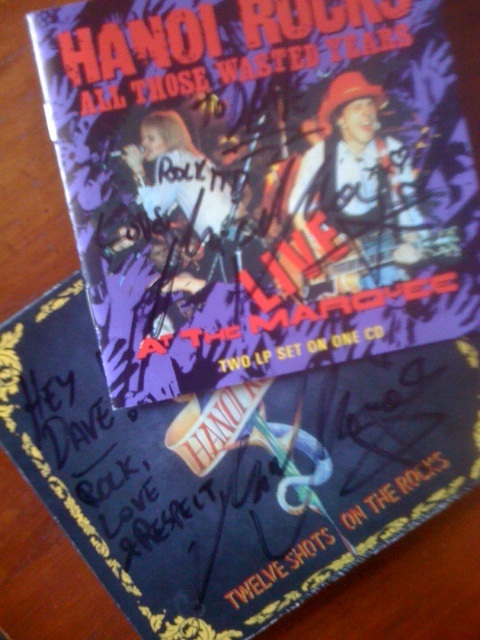 ROCKS! A couple of gems to add to the collection

Riding down the elevator, my wife and I stared wide-eyed at each other. Did that really just happen? I’ve interviewed my share of rock stars before, but Michael oozed that rare kind of 24-7 electricity that left me hopelessly giddy. Then it hit me. What if the photos didn’t come out? What if they’re blurry or too dark? What if? What if? Lacking the luxury of a digital camera and not trusting my crummy point-and-shoot, I felt the anxiety fraying my nerves. We gotta go back!

With coaxing from my loving wife, I trashed my journalistic credibility (and every ounce of pride) and quickly reversed the elevator. Back in front of Michael’s door, I stopped cold and hesitated. And then … I hesitated some more. OK. OK. Pull yourself together, man!

Feeling meek, but shameless, I knocked and again came face-to-face with Brandon. “Dude,” I stammered, like a blubbering idiot. “I hate to do this, but I’m worried the photos might not be that great and, well, dude, if I don’t have a great photo from today I’ll be totally bummed for the rest of my life. I’m sorry, man. I know this is pathetic.” 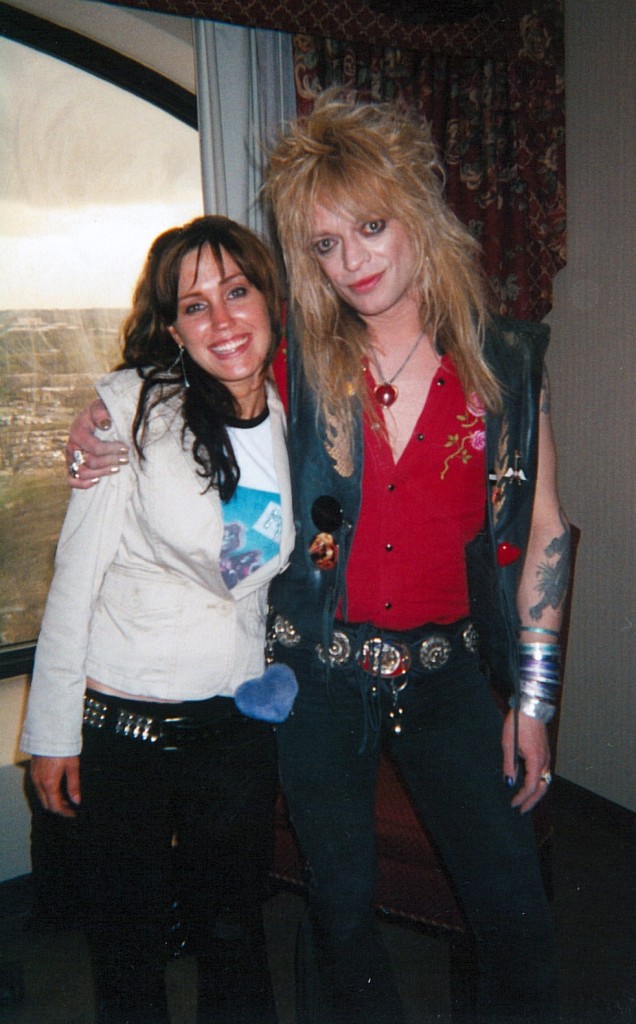 GLAM-TASTIC: My squeeze gets a squeeze from Michael Monroe

Expecting a snicker and rolling eyes, I instead was instantly relieved when Brandon said something to the soothing effect of, “Aw, man. It’s cool. I totally get it. I sat on an airplane next to Ginger (from the Wildhearts) all the way to Texas and I was going insane trying not to geek out. Come on in.”

Back in the room, Michael again welcomed us with open arms (literally) and gladly took another round of just-in-case, backup photos. In fact, it was he who suggested we take a few pictures by the window and then a few over there and maybe a couple right here and then some outside … All good, then? Absolutely!

As you can see, I got my prized photos, but I also made a friend in Brandon and caught a rare case of star-struck that may never be cured.

For my review of Michael’s latest and amazingly fantastic album, “Sensory Overdrive,” go here. To learn about his love of Alice Cooper, go here.