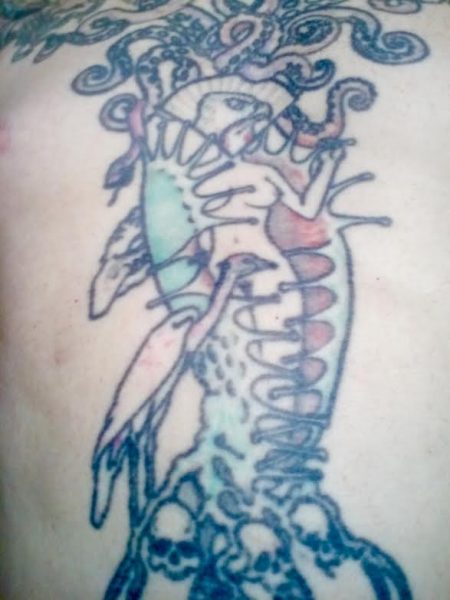 Head-to-toe tattoos are as common as ears among rockers these days, but in 1990 it was a fairly rare breed who went shopping for a needle to the ribs.

Count Dangerous Toys singer Jason McMaster as a dude who liked being scared (not really). Along with Circus of Power singer Alex Mitchell (and precious few others at the time), McMaster took the plunge for an expansive piece of pain in tribute to a favorite childhood album — Elton John’s “Captain Fantastic & the Brown Dirt Cowboy,” released in 1975.

“I got the tat in West Hollywood in 1990,” McMaster said. “The tattoo artist was recommended to me by David Roach from Junkyard (2Fast2Die Note: McMaster and Roach went to high school together in Austin, Texas).”

The art in question is a Venus flytrap wrapped around a naked woman with a bird’s head. The character detail can be found on the back-cover wraparound gatefold art of “Captain Fantastic” by artist Alan Aldridge. As was typical of 1970s album art, the image was a kaleidoscope of trippy characters and swirling colors. 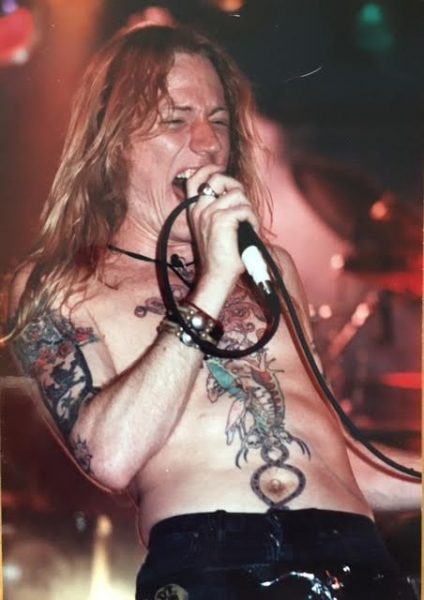 FANTASTICO!: McMaster letting it rip on New Year’s Eve 1992/93 with his work-in-progress, Elton-inspired tattoo in all its blazing glory. (Photo by David Castillo)

“That record has something about it,” McMaster said. “The cover art was like ‘Alice in Wonderland’ meets a sort of Shakespearean nightmare. I was 10 or 11 years old when I got it, and it changed me. Some dark stories on it.  The title track is so good, but others, like ‘Tower of Babel,’ ‘Someone Saved My Life Tonight’ and ‘Better Off Dead’ are engrained.

“The Venus flytrap section on the back wrap-around art sized right on my chest,” he continued. “It wouldn’t have fit anywhere else except my back so I got it on my sternum and later added tentacles to span up my pecs. Then there are these two Rat Finks with snakes for fingers in tribute to the song ‘Bitter Fingers.’ There is also a version of another character from the original art and they’re facing each other from one shoulder to the other.

“I actually have an autograph from Gus Dungeon who produced that album,” McMaster added.  “There’s no question that Elton John and that particular album are very special to me.”