Joey Ramone is on the phone and, man, is he ever pissed – at me!

The year is 1994 and I’m sitting at my desk at the Galveston Daily News cranking out some paid-advertising fluff. Except for one of my heroes calling long distance to chew my ass, it’s just another day at the office. Hey, Ho! Uh-Oh!

The point of contention is painfully clear: Joey is not happy about an article I wrote highlighting an EP he recorded with his brother, Mickey Leigh. Billing themselves as Sibling Rivalry, I got the bright idea of interviewing Joey and Mickey (separately) to get a glimpse into their childhood “sibling rivalry.” Clever, huh? Apparently not.

Long story short, Joey the famous rock star is less-than-pleased with some of the things his lesser-known brother divulged during his half of the interview. For the record, Mickey’s comments were hardly egregious or spiteful – just not as media-savvy, perhaps, as Joey would have liked. At the request of Joey’s publicist, I agreed to forward a preview of the article as a courtesy with the understanding that it would not be subjected to Joey’s approval. Wrong answer! 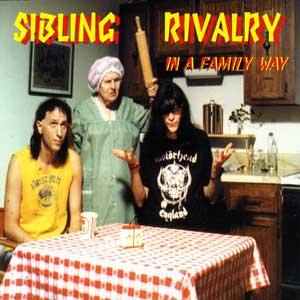 WE’RE A HAPPY FAMILY: Mickey Leigh is the picture of innocence while Joey wonders WTF? Who could ever imagine this obscure EP would cause a rift between me and Joey?

Sticking to my journalistic guns, I offered Joey an empathetic apology, but reminded him that he and Mickey agreed to the interviews unconditionally (anything less is journalistic suicide). Adding to Joey’s anger was the fact that my story was going to be released on the Associated Press newswires, making it available to publications around the world. Great for me. Not so great for Joey. So much for “no publicity is bad publicity.” In closing, Joey mumbled something about coming down to Texas to kick my ass. Then he hung up.

I was crushed. I absolutely love the Ramones. I have all their albums, multiple T-shirts, autographs, ticket stubs, the works. And now their singer wants me dead. F**king, great! I was proud of myself for holding my own, but miserable knowing I turned my hero into my enemy. Deep sigh.

A few days later, my story is available for all the world to read and I’m back at my desk substituting superlatives into this week’s paid puff piece. The phone rings. It’s Joey. Again. Please kill me! Expecting his Noo Yawk accent to curse me a river, I’m instead quite pleasantly astonished. Joey is apologizing. He’s sorry for being angry at me. He’s sorry for trying to pressure me. He admits my story is honest and fair. My lower lip starts to quiver.

To say I was relieved is like saying the Ramones can count to four (if you’re a fan, you get it). Not only was I off the hook, but I survived with my integrity intact. Thank you for calling, Joey. Tough love has never felt so rewarding.

***
To hear Sibling Rivalry go here.
To read the article that inspired the above drama, go here.