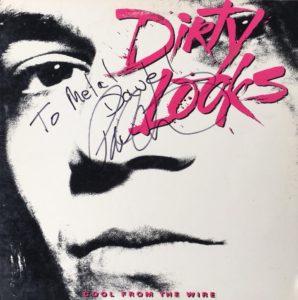 In celebration of one of hard rock’s most revered underground bands, Dirty Looks is set to regroup and perform its classic 1988 album “Cool from the Wire” in its entirety along with songs from its 1989 follow-up “Turn of the Screw” at the Ballroom Blitz Festival March 20 in Glen Burnie, Md. and again at DH&L Fire Company in Selinsgrove, Pa. March 21.

“As someone who first started collaborating with Henrik in 1986, I couldn’t be prouder to keep his memory alive through our music,” said Pyers. “We’re really excited to be playing these songs for the first time in years and reconnecting with all the fans who put Dirty Looks on the map.”

“Jason and Henrik knew each other for years and had great mutual respect for one another,” added Lidel (who went on to join McMaster in Dangerous Toys). “In fact, Jason used to come hang out with us when we toured through Texas and Henrik would invite him onstage to sing. In my seven years with the band, I don’t recall Henrik ever inviting anyone else up onstage. This is going to be a perfect match and a fitting tribute.”

Thirty-two years since its release, “Cool from the Wire” is considered one of the unsung albums of the late-1980s hard-rock explosion and remains a Dirty Looks peer- and fan-favorite.