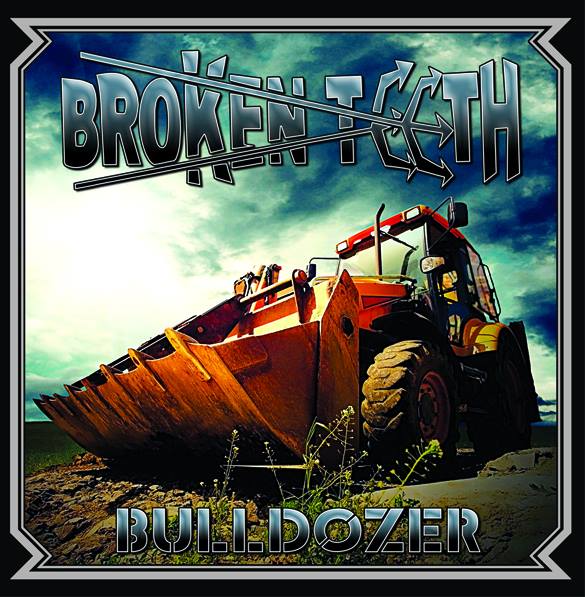 Broken Teeth arrived in 1999 as the best AC/DC sound-alike since “Powerage” and “Let There Be Rock.” Over multiple albums and various lineup changes (not the least of which was necessitated by the untimely passing of bassist Travis Weiss), the Austin, TX band has since spiked its bad-boy boogie with the speedier, face-kicking heaviness of Motorhead and Judas Priest.

With the “Bulldozer” EP due Oct. 23, Broken Teeth throws a bone to fans who have been hungry for a new release since the 2013 hits collection, “Devil on the Road,” and the 2009 full-length, “Viva La Rock Fantastico!”

Propelled as always by Jason McMaster’s sand-blasted vocals, “Bulldozer” opens with “Raining Fire” — a jolt of ZZ Nugent hyper-boogie that crushes with thud-heavy chord changes. “Red River Rising” pays tribute to Austin’s bygone dive district where front-row headbangers fell under the spell at the edge of Broken Teeth’s stage. The third and final brand-new track, “The Rough and the Tumble,” sounds like Rose Tattoo over echoes of Saxon (“Power & the Glory”) and Dio (“I Speed at Night” or is it “Stand Up and Shout?”). The common denominator among the three? Instant Teeth classics, one and all (and 100-proof positive there’s still plenty of fuel in the tank).

As for the rest, the previously released “Flamethrower” spins a Riot-style guitar hook into chugging, white-knuckled speed-metal as McMaster’s rapid-fire, Halford-esque delivery races toward the checkered flag. Another re-released track — “Devil on the Road” — tells the stomping tale of a “big, bad wolf” pushing his wares on the weak.

Rounded out by two perfectly-suited cover tunes — Aerosmith’s street-fighting “Lightning Strikes” and Motorhead’s “The Hammer” — “Bulldozer” slams to a breathless close before you know what hit you.

In all honesty, a seven-song EP containing two previously released (albeit relatively new) singles and a pair of cover tunes shouldn’t feel so fully satisfying, but Broken Teeth’s fist-cracking knack for bruising urgency never leaves time for boredom. It’s a “Bulldozer,” baby, and it’s gonna run ya right over! Count it among Broken Teeth’s best.

* Overall Grade: A (an all-new, full-length would’ve been a plus, but “Bulldozer” is too good to nitpick)
* Favorite Tracks: “Raining Fire,” “Flamethrower,” “Lightning Strikes” (subject to change by the minute)
* For Fans of: “Swords and Tequila,” New Wave of British Heavy Metal, gonzo biker rock
* PS: Yes, the band knows the difference between a bulldozer and front-end loader, but the former makes a more rock-n-roll title and the latter makes a more menacing image. So there.