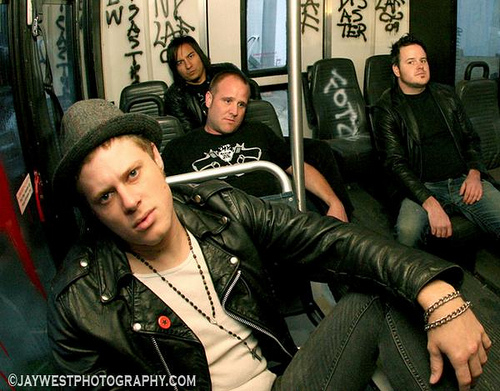 I first met Natchet Taylor nearly 10 years ago at my favorite Austin dive bar, Headhunters, where his self-named, three-piece punk-n-roll band used to encore with Danzig and Rancid covers. Just as the Natchet Taylor band was gaining momentum on the strength of an electric live show and a hard-earned 2005 debut album called “Barely Legal,” it was over without much warning or fanfare. 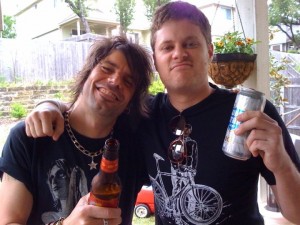 Natchet and I knew each other from the scene, but were not what I’d call “close.” So I was more than a little surprised when he invited me to a South Austin rehearsal space to offer my opinion of his next project. He was either boldly confident or completely fearless, but I was flattered that my two cents was considered some measure of value.

The “band” in front of me was comprised of all-star players, but as I stood there, they had no songs, no lyrics, no band name, no nothing. Nothing that is, except that elusive magic that reeks of exciting potential. As they tossed jagged riffs back and forth to nonsensical vocal gibberish that substituted for lyrics, I knew I was watching the birth of a high-octane, rock-n-roll killing machine. The guys exchanged puzzled glances and the “songs” crashed before gaining full-steam, but I was already sold. Whatever this band was going to be called, it was going to be called great.

Today, New Disaster has two must-own albums and a well-deserved reputation as one of Austin’s meanest, toughest, punk-metal wrecking crews. Think Motorhead and Guns ‘N Roses brawling for the last swig of whiskey and you’ll find yourself dangerously close to the pummeling sound of New Disaster.

As you read this, New Disaster is gearing up for the three-day Disaster Fest 2010 Texas blitz. Look for ND and a full slate of other regional rock bands this weekend in San Angelo (Sept. 17 at The Deadhorse), San Antonio (Sept. 18 at Nightrocker Live) and Austin (Sept. 19 at The Dirty Dog Bar). 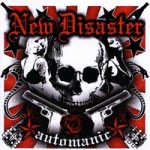 Plug your most recent project
New Disaster just released our latest full length album titled “Automanic” (Parental Advisory: This Album Kills ~ 2Fast2Die) and we are currently working on a new album. Or at least, we are in the early stages of it. I have also been writing a ton of other stuff that I don’t know what to do with. It doesn’t necessarily fit in the ND realm, so I don’t know. It has been an insanely busy time.

Album that changed your life and why?
I remember it so vividly. My life was instantly and irreversibly changed forever the first time I heard Iggy and the Stooges’ “Raw Power.” I put it on… WHAM! Lo-fi guitars rattled through the speakers then a shrieking guitar solo cascaded recklessly over a 60’s garage beat fest. Thus was Search and Destroy and my first experience with the freebased rock experience that is The Stooges. Holy fucking shit! You can do rock-n-roll like this? This is allowed? WTF! And it didn’t stop there … every song grabbed me. “Gimme Danger,”  “Raw Power,” “Shake Appeal,” “Penetration,” and so on. These tunes struck a chord in me, one that had always been there but I just didn’t know it. I have known since the age of three that I wanted to be a musician. I have always loved rock-n-roll, but I had never fucked her, until now. And I wanted more. My outlook, my viewpoints, my expression, my music, everything changed. I was living in an entirely different world. 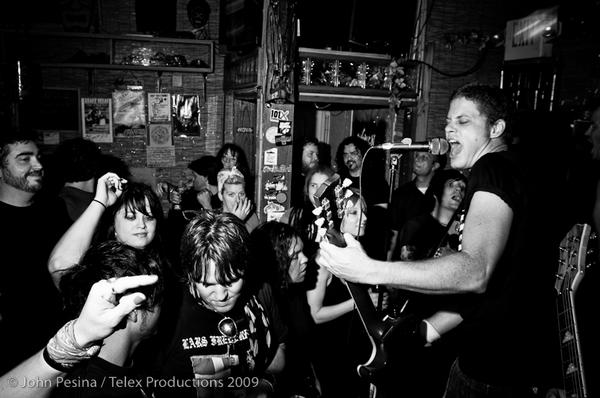 Out Come the Wolves: New Disaster at Headhunters HQ (photo by John Pesina)

Touring “horror story” or Spinal Tap moment
Back in the Natchet Taylor days, we played a show in Shreveport, LA. The show was this punk rock gig put on by a local magic shop or something. The store was owned by this hippy couple who tolerated the punk kids hanging around. Anyway, we play the show to a completely insane and frenzied crowd of kids. Afterwards, half of the band goes off to gamble and me and my bass player Luke go to an “after party,” which was nothing more than a drug-fueled, crazed scene reminiscent of “Lord of the Flies” on amphetamines. Here we were at this huge house, out in the middle of the nowhere, overrun completely by more than 100 punk rock teenaged kids (no adults anywhere), with booze and drugs and shenanigans everywhere.

The night got even more harrowing when some of the kids decided to build a bonfire in the back yard. Soon, a pyre was constructed out of firewood, pieces of the house, tires, appliances, and furniture. The kids doused it with gasoline and struck flame to the pile. FWOOMP! The pile ignited and began to catch the trees around it on fire. I remember one of the kids asking around if anyone had a gun. Another kid was shooting a bow and arrow into the fire. It was a surreal experience. I wondered if my night was going to end up in that fire or if I was going to wake up in the county jail. Fortunately, neither occurred. 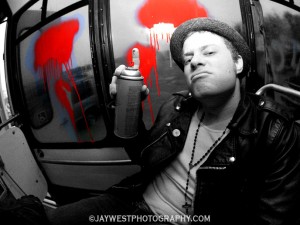 Your best and worst tattoo?
I really like them all. Even my first one, which is a cartoon snake on my arm. Fortunately for me, the times that I would have been stupid enough to get a crappy tat (aka on tour), I was also completely broke. Being poor can really save you at times.

Name of your very first band and other rejected band names
I was in a band in San Antonio called The Modern Greek Gods. I didn’t come up with the name, but I knew that we all LOVED The Sons of Hercules and wanted to open for them at a local show so fucking bad. I imagine we named our band accordingly, either to kiss up to them or at least sound similar. We never did get to open for them, but then again, we sucked.

This one is embarrassing. When we were getting New Disaster together, we had a bunch of songs written before we had a name. One night, after rehearsal, we spent hours drinking and trying to come up with a band name. After going through a list of dozens of possibilities, we unanimously decided on The Easy Aces. Seriously. The Easy Fucking Aces!! That was our name. Sweet. Name accomplished. I went home and went to sleep. The next morning I awoke severely hungover and went to work. On my drive in, I remembered the name, The Easy Aces, and almost puked. I immediately called everyone in the band and left a voicemail: “We are not going to be called the Easy Aces!” Man, it was like waking up with a bad decision sleeping naked next to you in the morning. We were like, “What were we thinking?!?!?!?!” 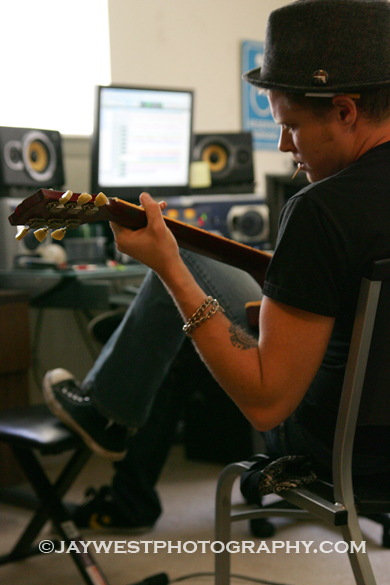 Natchet Unplugged: The calm before the Disaster

Musical accomplishment you’re most proud of
New Disaster. We built this band from the ground up, recorded some killer tunes that I myself would listen to and toured the world. We did it ourselves. It hit me when I shipped my first ND T-shirt order overseas. Somebody in Europe wants to rock an ND shirt??!! Fuckin’ A! I was in the post office and felt like Slash or something … except I doubt Slash mails his own merch!

Share a secret. What is your hidden talent? Guilty pleasure? Unexpected hobby?
I feel like I’ve already shared too many secrets. However, I am a complete computer nerd/dork/geek/whatever. I have been since the 80’s.

Hero or villain? Best or worst “rock star” run-in
We played with L.A. Guns. Phil Lewis was doing some meet and greet shenanigans, and I was next to him at the ND merch booth. He leaned over to me and said that he had been a close friend of Phil Lynott’s and that our cover of “Emerald” was great and that we really did it justice. He said that Phil would have enjoyed it. It was a passing comment. A compliment. But it really struck me. I then realized that I really would have wanted Lynott to enjoy it. I was elated. It was an amazing thing to say. 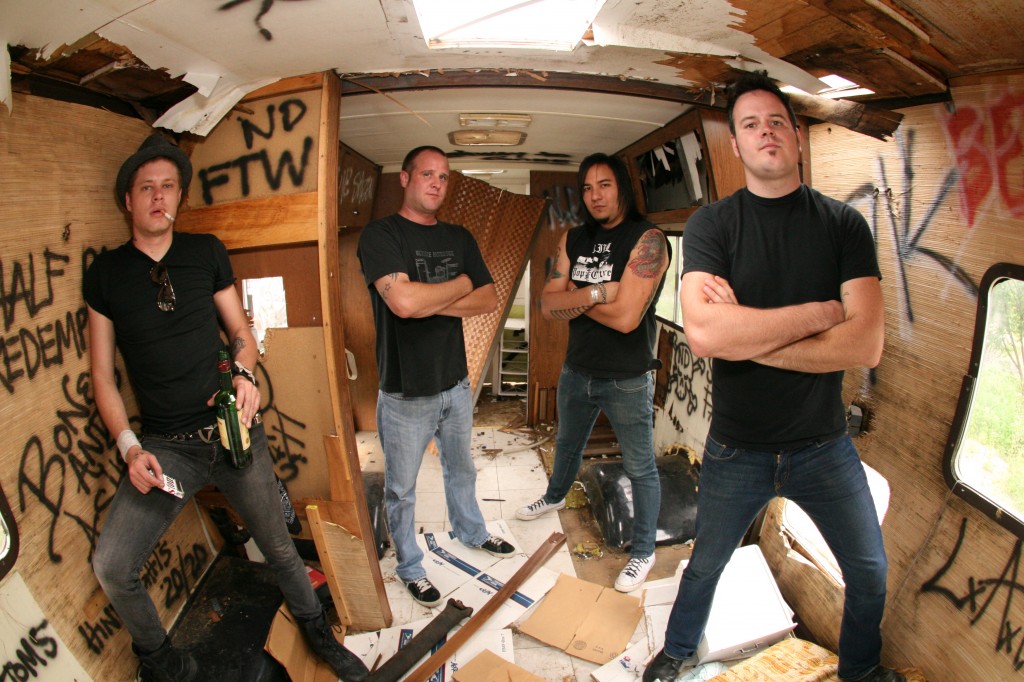 Whaddya Mean We Can’t Get Our Deposit Back?