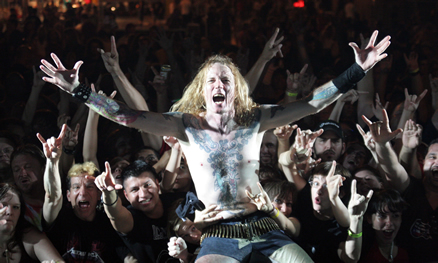 Welcome to the first installment of a new semi-regular 2Fast2Die Q&A feature called “Yakking With …” What better way to debut than with singer Jason McMaster, whose storied careers with Watchtower, Dangerous Toys, Broken Teeth, Ignitor and others has rightfully made him a Texas metal legend (“Can I get a Slayer?”). Jason’s website will give you nightmares, so do yourself a favor and check it out before bedtime.

Jason, of course, is a star in his own right, but we’d like to see him get a star of another kind (no, not a pentagram!) in his hometown of Corpus Christi. So, if you call yourself a rocker and think you’ve earned that Motorhead shirt you like to sport, then you’ll be happy to take a moment to nominate Jason for a star on the South Texas Music Walk of Fame in Corpus Christi. Put down that beer, stub out that smoke (cuz Jason hates that shit in the front row!) and send a well-deserved email to sue@surfclubrecords.com on behalf of Jason. Make sure to type “I NOMINATE JASON MCMASTER FOR A STAR IN THE SOUTH TEXAS MUSIC WALK OF FAME” in the subject line and also in the body of the email (hell, stamp it on your forehead!). Jason will thank you and so will 2Fast2Die.

Plug your most recent project:
I’m having a banner year with the new Broken Teeth release, “Viva la Rock Fantastico.” The newest Dangerous Toys DVD released this year has not done too shabby either. I look forward to a gig with both bands in Austin before the end of 2010.

What album changed your life and why?
“HotterThan Hell” by KISS. Look at the cover and hear the songs. They speak to me. End of story.

Name your first concert and share your memories:
It was the Rush “Farewell to Kings” tour with opener UFO in support of their release, “Obsession.” It was 1977. I was 12 and I shed tears because I couldn’t believe I was meeting with such a creation of volume and incredible music and sound. At that moment, I knew what I wanted to do with my life.

Share a touring horror story or Spinal Tap moment:
True story: Dangerous Toys could not find the stage and went on five minutes late somewhere. I don’t recall it being in Cleveland.

Your best and worst tattoo:
My best tattoo is my forearm Japanese fire dragon inspired by my Dangerous Toys tours of Tokyo in 2001, and 2003. My worst tattoo is the Koi fish on my left foot, because it took a month to heal. I was doing gigs and shit with only one shoe on.

Name of your very first band and other rejected band names:
Rampage! I was kicked out for being immature. I was 15. I’ve been lucky with band names — some bad ones are better than some bands that have sold millions.

What musical accomplishment are you most proud of?
Being able to say that I’ve been playing music my whole life and I am booked til next year.

Share a secret. What is your hidden talent? Guilty pleasure? Unexpected hobby?
I sew, I cook and I can curl my tongue into a three-leaf clover and make it wag like a whale’s tail.

Hero or villain? Tell me about your best or worst “rock star” meeting:
Lemmy, Halford, Alice Cooper … All villains, all heroes and all impressive!