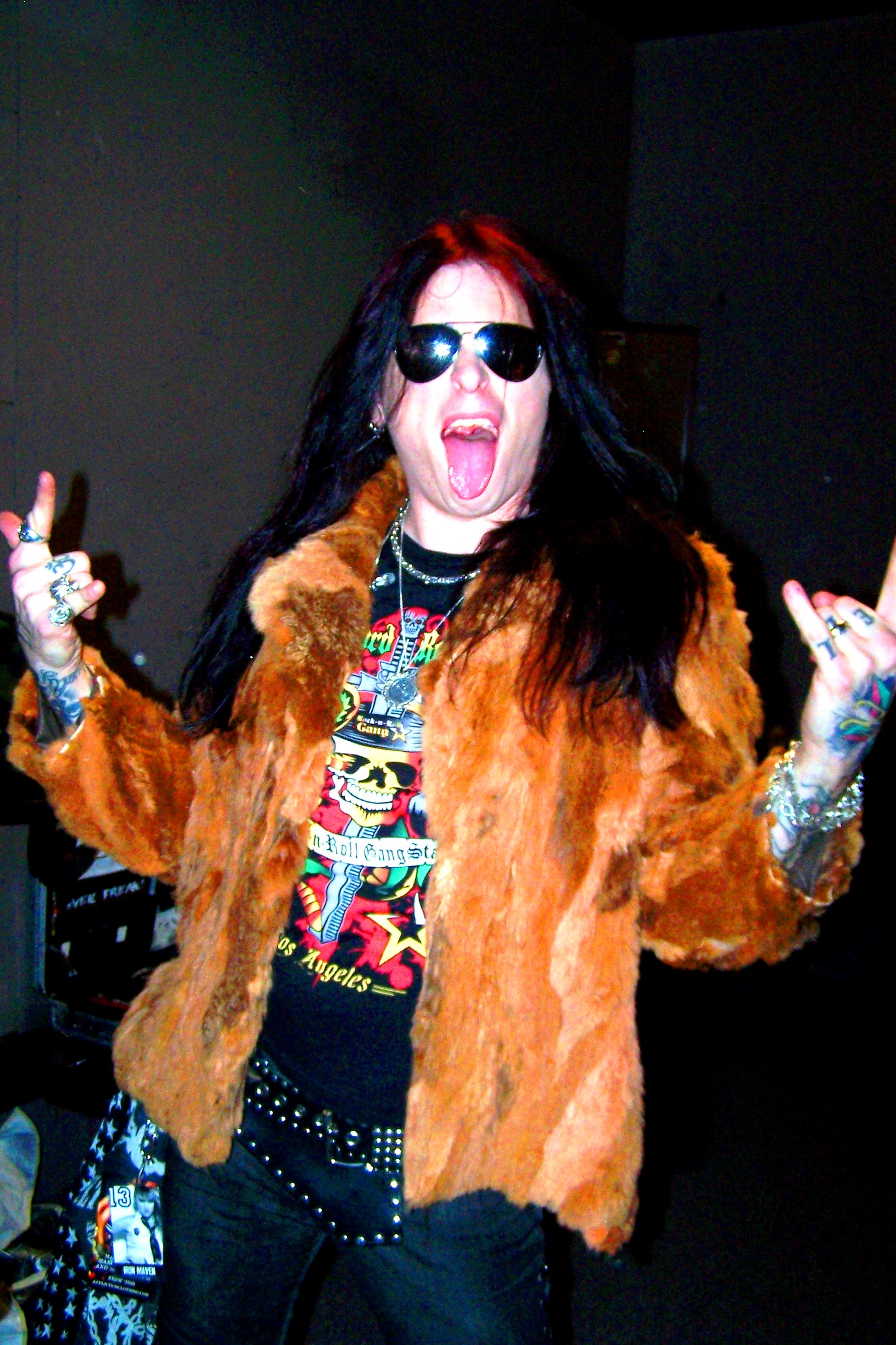 Colby Veil grew up in Rockwall, Texas but hauled ass to Los Angeles so he could start livin’ out his fantasy of sleepin’ late and smokin’ tea.

Actually, Colby moved to L.A. so he could marinate in the birthplace of Guns N’Roses. Once there, he drank up the Hollywood nightlife, formed a band called Dopesnake (now THAT’s a friggin’ band name!!!) and became quick friends with some of his Sunset Strip heroes.

Dubbing himself “The Bastard Son of the Sunset Strip,” Colby became the mirror-shade image of Axl Rose and formed the GN’R tribute band, Hollywood Roses. What would appear to be a tough sell in snooty L.A. was actually welcomed with open arms (and legs, we presume) as Hollywood Roses became a respectable draw on the cutthroat Sunset scene (hey, if Axl and Slash won’t satisfsy their fans, Colby is happy to oblige).

Things were rocking right along for Colby, but his nightrain would soon hit the fast track when he got a call from original GN’R drummer, Steven Adler, who wanted “The Bastard” to be his new singer in Adler’s Appetite. Things went as things go when you work with Adler, which means it ultimately came to an end (at least this breakup was friendly and the guys remain great friends).

Today, Colby continues to gig as Hollywood Roses. “As for playing live, we don’t just knock out the Guns N’ Roses tunes,” he said. “We’ve also had the opportunity to add some new tunes and make the shows a lot of fun. Along with the regular GN’R hits, we’ve added “November Rain,” “Live & Let Die,” “Yesterdays,” “Patience,” “Used to Love Her” and some others.”

Plug your most recent project
The main project is the brand new Hollywood Roses record to be released on Deadline Records in early 2011. This is going to be completely different from anything I have done so far. I’ve been so lucky to be able to work with the brand new lineup of Robo (Ladyjack), Matty Dee, NikiRott and Justin Sandler. This new record is going to be something totally new. It’s all about going for the throat and leaving a mark! That’s rock-n-roll. It’s not always nice, but it leaves a beautiful corpse.

Album that changed your life and why?
I have a list of albums that have truly changed my life and helped transform me into “The Bastard Son of the Sunset Strip.” Everything you ever need to know about rock-n-roll lies somewhere between The Ramones and Aerosmith.

First concert and your memories of it?
Nelson with House of Lords. All I can say is that my parents said I was too young to see Motley Crue and Warrant. Look how I turned out! Touring “horror story” or Spinal Tap moment
Getting stranded in Georgia with Adler’s Appetite on our way to Buenos Aires, Argentina. There was an announcement that said, “Will the remaining members of the band Adler’s Appetite please exit the plane.” It was myself, Michael Thomas, Kristy “Krash” Majors, Chip Z’Nuff, Steven Adler and Steve Lobel. We watched as the plane flew away with our luggage. Why? Let’s just say, Ambien, Hennessey, vodka, tequila, and insulting the flight crew in Atlanta was not a good plan.

Your best and worst tattoo?
They all have a story attached to them and like any story in life, some are good and some are bad. But that’s not the question is it? I have no regrets, that’s just all part of the game. Entertainment or Death!

Name of your very first band and other rejected band names
This is a great question! My first official band was called Akrimia, whose namesake was based on an alien queen that appeared in a recurring dream that my drummer Todd frequently had. Some others include Fatal Desire, Bonedust, The Kneed, Bad Influence, Millenium, Lost Empire, Wicked Desire and 6&7.

Musical accomplishment you’re most proud of
The entire process, start to finish, of writing, demoing, rehearsing, tracking and recording the Dopesnake record. It was pure magic. I got together with Danny Nordahl (The Throbs, Faster Pussycat, MotoChrist) and we just started gelling. He came up with the riff for “Hell Yeah!” which is the first song on the record and we just kept on going. The motto on that album was, “What Would Iggy Do?”

Share a secret. What is your hidden talent? Guilty pleasure? Unexpected hobby?
I will divulge three: My favorite movie is “Pee Wee’s Big Adventure;” my favorite cartoon is “Rugrats;” and I have an extensive “Beanie Babies” Collection

Hero or villain? Best (or worst) “rock star” run-in
I’ve been lucky to not only become comrades, but to have also toured, written, recorded and performed with the very people that inspired me to be the man and musician I am today. And then there’s my curse regarding Nikki Sixx, which is always working diligently against us meeting. This I have come to accept! So, with ironic candor I now quote a song by Nikki Sixx’s band 58 by saying “All My Heroes Are Dead.” Mostly, Jerry Cantrell of Alice In Chains and Izzy Stradlin of Guns N’ Roses are two heroes of mine that are equally amazing as human beings as they are gifted, legendary songwriters and musicians.

Most embarrassing on-stage moment?
I was singing in a band called Wicked Desire at The Mason Jar in Phoenix, Arizona back in 1994. Sometime during the first of two sold-out shows opening for The Scream, my amazing brown leather pants split in the crotch. Needless to say, I was exposed and didn’t realize it until our guitar tech literally yanked me to the side of the stage and yelled into my ear, “Dude, your dick’s hanging out!” Never missing a beat, I quickly ducked into the dressing room, grabbed a bandana and carefully stuffed it into the appropriate place. By the end of the song, the front row, which pretty much consisted entirely of girls, was throwing dollar bills onstage. That was pretty damn funny. What was even more funny was when our tech came into the dressing room after the show and handed me 30 one-dollar bills. Jager shots were on me! By the way, I was 17 years old!