Yakking with … Benji Lee of Supagroup 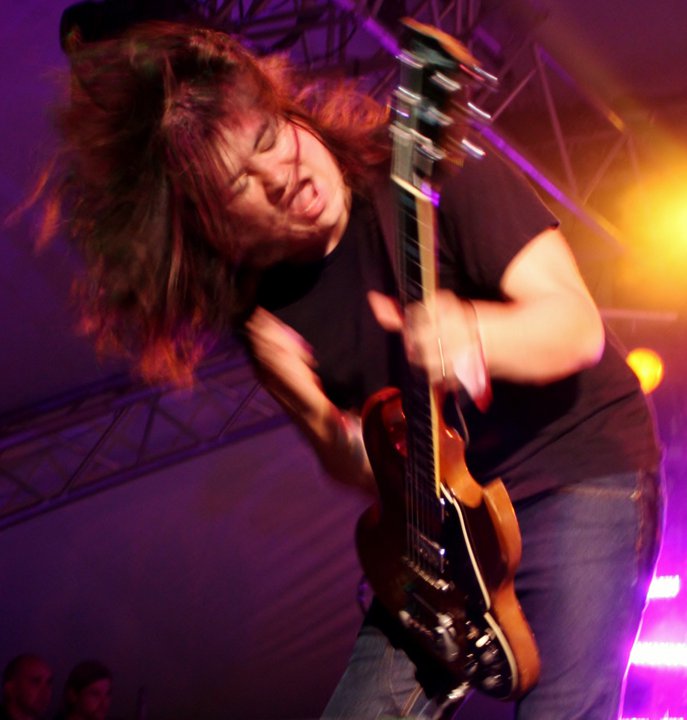 I first got kicked in the teeth by Supagroup during the late 1990s when a business trip took me to Atlanta. By day, I reported to an office. By night, I prowled the Little Five Points district where I happened upon Supagroup who, in those early days, used to encore with a cover Guns N’Roses’ “It’s So Easy” featuring a punk-rock roadie on lead vocals. I may have already been acquainted with Supagroup at the time, but it was in Atlanta where we became beer brothers.

Hailing from New Orleans and fronted by Alaska-born guitar brothers, Chris and Benji Lee, Supagroup initially got my attention thanks to their reputation for being straight-A graduates from the hard-rock school of Aerosmith, GN”R and especially AC/DC. Their self-titled third album screamed “Let There Be Rock,” right down to the Benji-as-Angus cover art, which freeze-framed a role he still plays like nobody’s business. An exciting live act bar none, Supagroup can rock with hardest, but does so with a Foo Fighters sense of humor that reminds you there may be hell to pay tomorrow, but we’re too giddy to give a damn now. 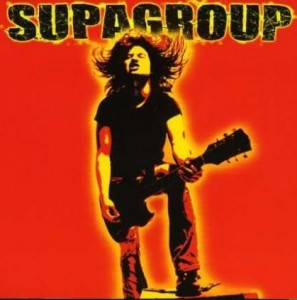 Since our friendship started more than a decade ago, Supagroup has released multiple albums; toured with Queens of the Stone Age, Whitesnake and Alice Cooper (who famously noted they were the first band since Guns N’ Roses to earn standing ovations as his opening act); survived Hurricane Katrina; opened The Saint (a tiki-dive watering hole in downtown New Orleans); celebrated Chris’ marriage to former White Zombie she-devil bassist Sean Yseult; and most recently bid farewell to longtime friends and band brothers Leif Swift and Michael Brueggen.

We recently caught up with Benji for an update. Start Yakking, brother …

What happened with Leif and Brueggen?
They moved on to other pursuits. While we were sad to see them go, we understand that after 10 years of being on the road and making the kinds of sacrifices it takes to be in a full-time band, there comes a desire to do grown-up things like start a business or a family. They still play on the new record and we are still the best of pals. That said, our new rhythm section consists of former Dash Rip Rock drummer, Leon Touzet, and also of Dash Rip Rock fame, bassist Brian Broussard. And they can both rock like a son of bitch. 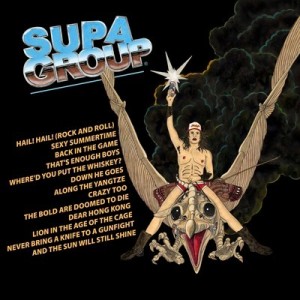 Plug your most recent project
We just put out our latest record, “Hail Hail.” We recorded it in our studio over about a year. I produced it and Kevin Shirley (Aerosmith, Iron Maiden, Led Zeppelin) mixed it. Danko Jones shares a track on it. By the end, we had over 30 recorded songs, and these are the ones that made it. We also just shot a pilot for our scripted television show, “Amped.” It’s a fake show about a real band. But kinda true. 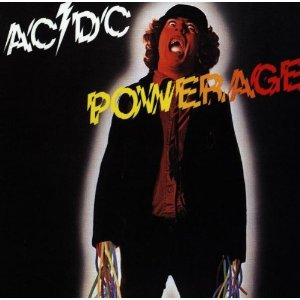 Album that changed your life and why?
AC/DC’s “Powerage.” Still my favorite record. So simple in its approach, yet unreal in it’s execution. As a kid, I always loved AC/DC, but once I got older and rediscovered my rock-and-roll upbringing, that was the record that stood out as what a band could accomplish. It’s so quintessentially ’70s; huge riffs, dead drums, big leads, great arrangements. The whole package, really.

First concert and your memories of it?
Metallica, Anchorage Alaska, 1992. I was 14. I remember telling my mom I was going to a youth group meeting. My friend’s brother picked me up and they were drinking beer and smoking a bong in the truck. That blew my mind. He had to stop at his girlfriend’s house to console her because she just had an abortion. Then when we got to the show, I was the go-to expert on all the Metallica songs, which made me cool in their eyes. I remember seeing a girl from my class wearing a white leather jacket and teased hair doing her best to play up the rock slut. I thought, “that’s awesome.” And when I got home I realized I had gotten away with it scot-free. 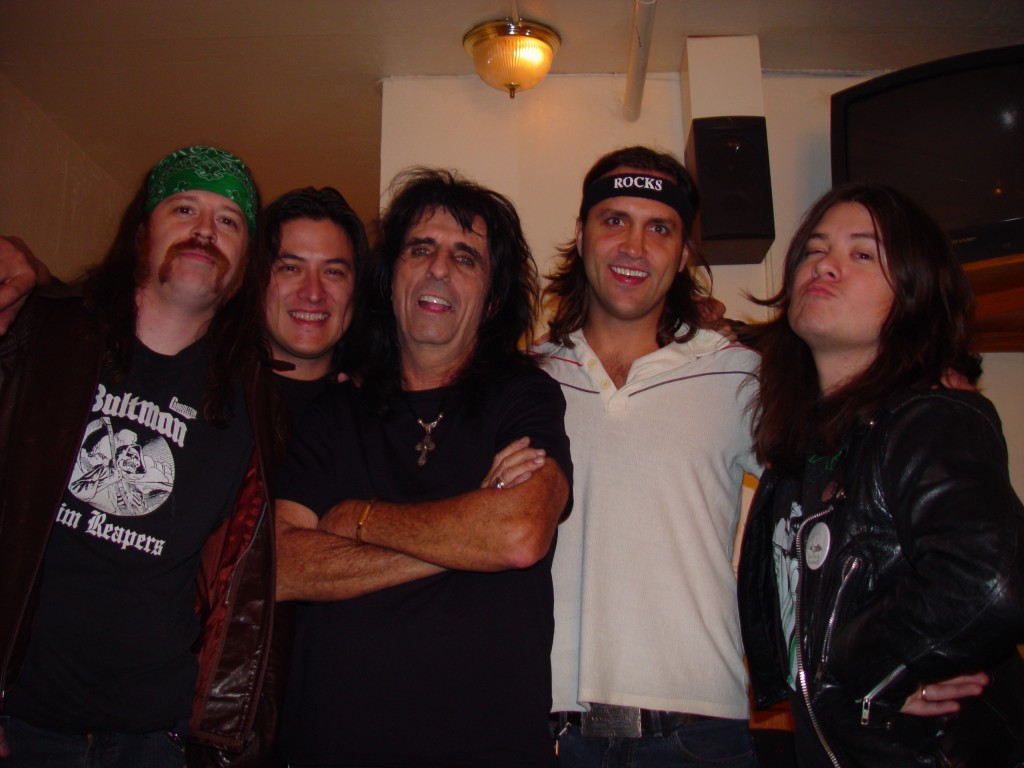 Tell us about touring with Alice Cooper
Touring with Alice Cooper was our first big break. We had opened for him in New Orleans a few years before and he remembered us when we submitted for the tour. For a band used to playing small clubs and sleeping on floors to playing hockey rinks to thousands of people … needless to say it was a pretty big deal for us. Alice was so cool. He would bring us on his bus and tell us stories of playing with Zeppelin. We started referring to him as “Uncle Alice.” He would also give us huge pointers — the kind I won’t share with your readers. His band, crew, everyone was so professional. On that tour we kind of blossomed on a different level. We wrote the entire album “Rules” on that tour. And being on that level helped us land Kevin Shirley (Iron Maiden, Led Zeppelin) as our producer. 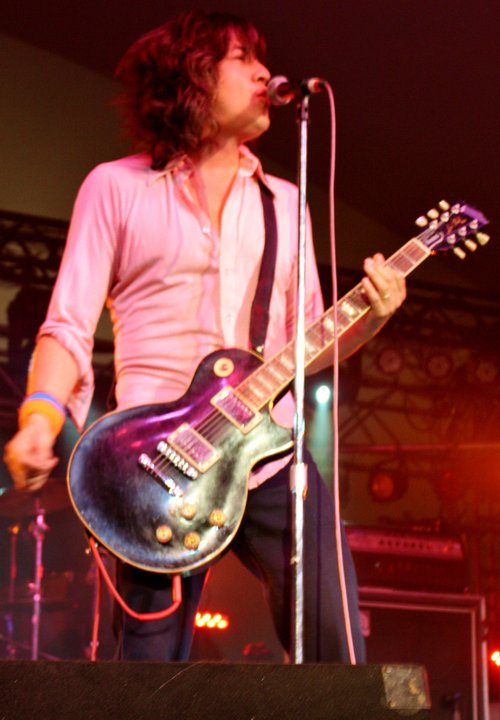 The second time Alice asked us to tour was much different. We were scrambling right after Katrina not knowing what was going to happen, watching our city in tatters, and we were scattered all over the country. Such a horrible time. He reached out to us and asked if we’d like to come out on tour instead of watching CNN all day. Uncle Alice to the rescue! I felt bad for the band that was supposed to get that slot, but Alice was like, “Hey, you got no homes.” I cannot stress how much that meant to us. It was more than just a tour. We were traveling all over, so we got to touch base with so many people we hadn’t heard from since the storm.

How about touring with Whitesnake?
Touring with Whitesnake was fun. Made a lot of new fans. Got to play the Beacon Theater in NYC. I tripped over the monitors and ate it during that show. The one chance we get to play this amazing place and I fall down like an idiot. Backwards too, with my feet in the air! Of course, Chris made a big deal about it on the mic, which made it easier to laugh at. Reb Beach and Doug Aldrich were the guitarists in that band. Reb wrote, “17,” when he was in Winger. Doug was Dio’s lead guitar player. The band was super cool. Tommy Aldridge on drums. Really good times. Except they all ate only white chicken meat and sauteed vegetables. Very odd to eat that every night for six weeks.

Touring “horror story” or Spinal Tap moment
That’s an easy one: breaking down for the fourth time in one tour, three hours from home after eight weeks on the road. We were so broke and exhausted, we just thought, “Really, three hours from home? Why?” After a day of trying to repair the problem, we did the tow truck back to town with three of us hiding in the van on the bed of the tow truck. But that’s simply called paying your dues. Looking back, I wouldn’t trade it for anything.

Your best and worst tattoo?
I only have one: Bruce Lee’s famous pose from “Enter the Dragon.” 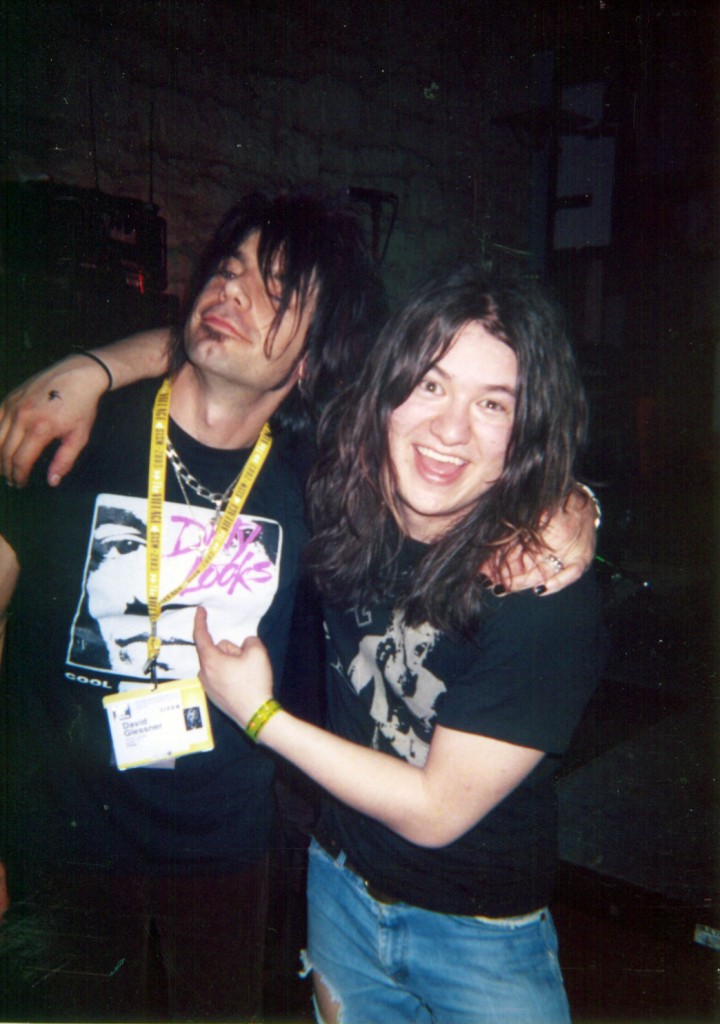 Name of your very first band and other rejected band names
Shit Ass Punks was the early name of Supagroup. We started that band in 1994, but it turned into SAP and then Supagroup. I was also in a band I fronted called rRobot, during my high school years. It was very Sugar/Weezer/Pixies-esque, or at least that was who I thought we sounded like.

Musical accomplishment you’re most proud of?
Probably this last record. It was such a labor of love and really took a lot of work to pull off, but what came out is a record that rocks from start to end and I’m seriously still not sick of it. Not that I won’t get to that point, but right now I’m still digging it.

Share a secret. What is your hidden talent? Guilty pleasure? Unexpected hobby?
I am a tiki culture freak. I have a night I do at my bar, The Saint, in New Orleans where I do all sorts of traditional and nouveau tiki drinks using fresh-squeezed pineapple and orange juices, orgeat and even the little umbrella. Ooga booga, man!

Any last-minute stories about crossing paths with your rock heroes?
I don’t want to name names, but if you are going again and again on your own down the only road you’ve ever known, you might not want to leave incense and candles burning around your recently hung tapestries in your hotel room while you go to dinner. You might come back with the fire department hosing down your room in the still of the night. And those are lady pants you’re wearing! As for heroes, hands down, Alice Cooper! He’s the best in my book. I’ll be a diehard fan forever. And his music is timeless.