Nashville Pussy: What’s in a Name? 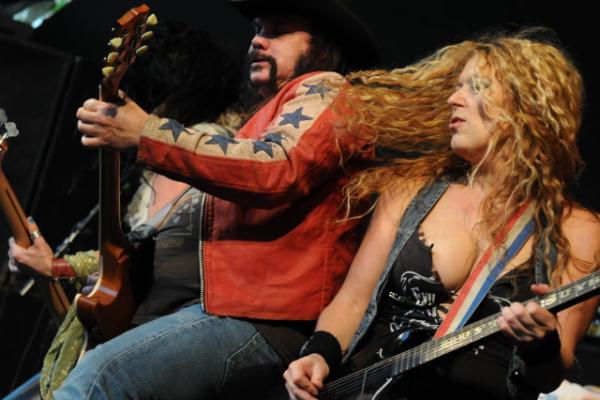 So my editor at the San Antonio Express-News noticed the recent 2Fast2Die post about Nashville Pussy and decided to forward my 1998 interview with frontman Blaine Cartwright and his guitar-player wife, Ruyter Suys (pictured above, courtesy of the band’s website). Hard to believe it’s been 13 years. You’ll notice the story is preceded below by my editor’s apology for censoring the band’s name. As you’ll soon read, it’s takes more than a little alphabet censorship to clean up this raunchy act. Let ‘er rip!

(Editor) Remember this? So sorry we had to call them Nashville P.

WHAT’S IN A NAME? PLENTY IF YOU’RE NASHVILLE P
by David Glessner
SPECIAL TO THE EXPRESS-NEWS
05/29/1998

When you bill your band as “Motorhead with (breasts)” and give it an unprintable name, you better have the fortitude, fists and music to back it up.

Ladies and gentlemen, I give you Nashville P, a gasoline guzzling, co-ed quartet of redneck raunch ‘n’ rollers who have the competition whipped.

Taking their name from Ted Nugent’s “love song” on “Double Live Gonzo,” Nashville P features two half-naked she-demons and a couple of guys who look like case files from “America’s Most Wanted.”

Touring behind an album titled after a perverted take on Marie Antoinette’s historical quote about eating cake, these moonshine-fueled pussycats should leave the White Rabbit in shambles when they crash land there on Tuesday.

“We seem to attract the nuts,” said vocalist/guitarist Blaine Cartwright. “The shows tend to sell out, which means people get there early and start drinking. It gets pretty chaotic.” 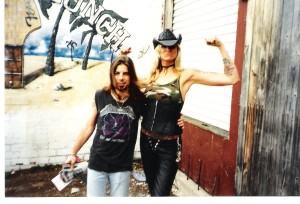 2Fast2Die and his bodyguard, Corey Parks

Cartwright, formerly of Nine Pound Hammer, met and married guitarist Ruyter Suys after they spotted each other across a room wearing similar Motorhead T-shirts. They soon recruited ex-Phantom Creeps drummer Jeremy Thompson and bassist Corey Parks, a 6-foot-3 Amazon woman who breathes fire and sports a Harley- Davidson tattoo with an X-rated message below her waistline.

“I think she learned how to breath fire from that chick in GWAR,” Cartwright said. “She caught some guy’s mohawk on fire the other night ’cause he had too much hairspray in it, but it went out immediately.”

“It helps in the long run,” Cartwright said. “People hear it once and they don’t forget it. When you put the name up front, they know what they’re getting into.” 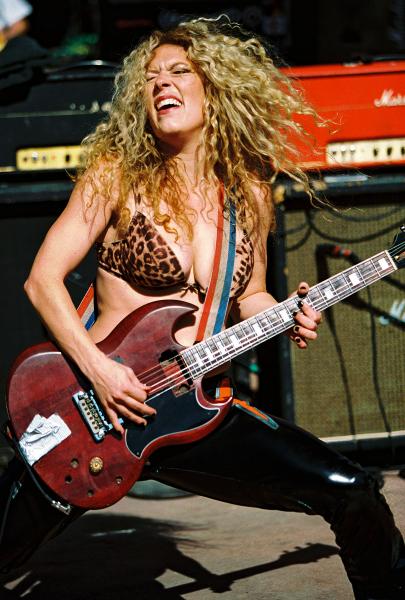 What you’re getting into at a Nashville P show is a no-holds barred presentation and a pounding soundtrack.

“We start off doing songs from the record and at some point we start throwing in AC/DC covers,” Cartwright explained. “Then there’s the fire breathing, a guitar war and Corey and Ruyter start kissing. What’s outrageous to other people is pretty normal to us.”

Just like Guns ‘N Roses or the Butthole Surfers, Nashville P may transcend the censors by bringing back the danger and swagger inherent in all great rock ‘n’ roll bands.

“We have no real agenda as far as sticking it to society,” Cartwright said. “I want to open for the Stones. I guess the ultimate satisfaction for me would be to draw the kids away from hip-hop and raves, and bring them back to rock ‘n’ roll.”

“We knew we were doing something good,” added Suys. “We just never guessed people would flip out so bad.”

Back when Cartwright and Co. billed themselves as “Motorhead with (breasts),” word got back to Motorhead’s Lemmy Kilmister.

“He asked, ‘How many (breasts) do they have?'” Cartwright explained. “When they told him, ‘Four,’ Lemmy said, ‘That’s not enough.'”