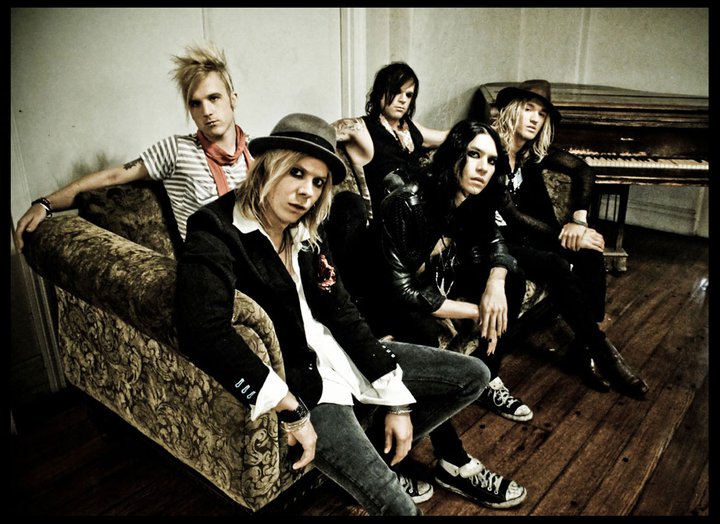 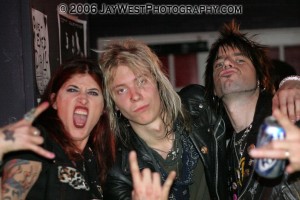 I first met Vains of Jenna in 2006 when half the band was too young to drink (what happens in Austin, stays in Austin … especially during SXSW). The kids from Sweden were being hyped as a new-generation Motley Roses, so of course I went sniffing for trouble and immediately liked what I found.

My editors at Classic Rock magazine weren’t sold on the band, so I kept bitching and moaning until they finally relented and promised me a full-page, color spread if I could land an interview and kindly just please shut the bloody hell up (thanks, lads)!

Newly revamped today as a five-piece with American singer Jesse Forte taking the place of Lizzy Devine and rhythm guitarist Anton Sevholt fattening the sound, the Vains — rounded out by guitarist Nicki Kin, bassist JP White and drummer Jacki Stone — recently called and asked if I could find them a gig in Austin as they blitzed through Texas on a mission to pop some fuses. 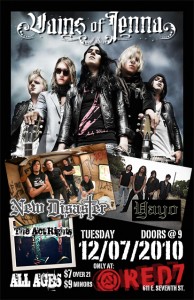 Thus, Metal Dave Productions and 2Fast2Die presents Vains of Jenna with New Disaster, Yayo and the Act Rights at Red 7 on Tues. Dec. 7. A big thanks goes to all of the above with extra love for New Disaster frontman Natchet Taylor who kicked in his computer skills to create the gig’s promo posters.

How are the fans reacting to the new lineup? Is it already comfortable or are you still in the adjustment phase?
The fans love Jesse and our new rhythm guitarist Anton. There’s a whole new vibe and energy to the whole Vains of Jenna show and Jesse is getting more comfortable in his role as the frontman/singer of the band, and I think the fans can see that. The reaction from the crowd in Europe and South America has been really good so far. Actually, the response has never been better. We can’t wait to get out there and play for our American fans and show them the new Vains of Jenna.

What’s it like living on the road with two new brothers? Any new traditions? Initiations? Quirky, bad habits to endure?
It’s amazing, both Jesse and Anton bring a good positive vibe to this band and it just feels great both on and off stage. Me, Nicki and Jacki are very happy to have them onboard. There’s been a lot of crazy shit going on, but we keep that to ourselves for now. Maybe one day we will tell it all in a book or something. I guess everyone has to come out to the shows and hang with us to find out for themselves.

What do the new guys bring to the old songs? Do the songs “feel” different to you in any way now that new players are in the mix?
There’s definitely more “feel” and soul to the sound. Both Jesse and Anton have this nice cool blues attitude and feel that makes both new and old songs sound great. Jesse’s voice and stage presence are just amazing. Anton just plays so good and he can also lay down background harmonies like a motherfucker, which is great.

What’s the status on writing new material and what is the forecast for the new album? Any changes in direction? The new song sounds a bit different or moodier to me than some of the previous stuff. Are you going for a different vibe or otherwise welcoming new influences to VOJ sound?
We have been writing and working on new songs for a while now and I know that Nicki has a bunch more coming that we will start working on in the near future. The plan is to start recording this new VOJ album sometime next year — probably before the summer hits. As far as the directions of the songs, Vains of Jenna will always be rock’n’roll and we always welcome new music that can influence us in a good way. Lately we’ve been really into Muse, The Beatles, Black Rebel Motorcycle Club and Oasis to name a few. We are a new band now and are able to write songs on a totally different level than we used to and all for the better. I think that the new songs that we’ve been writing and working on are amazing and they really fit the band right now. It’s true rock’n’roll music.

Below: Vains of Jenna’s latest video followed by a 10-minute promo clip from Brazil. Watch, listen and call in sick after the gig on Tuesday, Dec. 7 at Red 7 in Austin. See ya there!