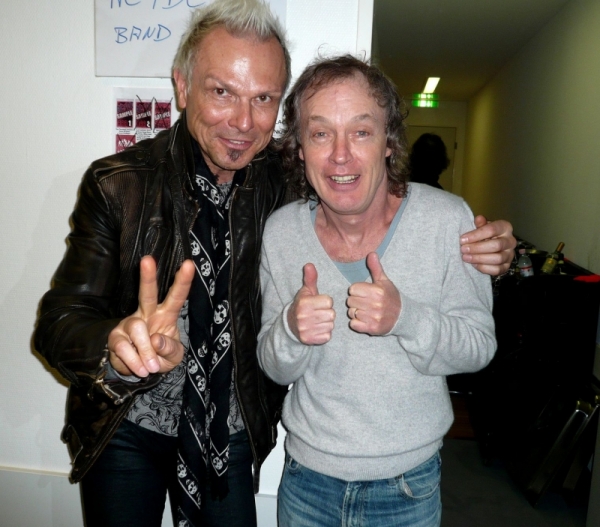 The Scorps are promoting a fine swan song of a new album titled “Sting in the Tail” and will, of course, take you by force with a tsunami of greatest hits from an illustrious, 40-year career. Can you expect a stellar setlist? Check. Can the old men still rock? Absolutely. Can Klaus still sing? Last I checked, he was in fantastic form. This is a show worth the dough.

I recently spoke with 62-year-old Scorpions guitarist Rudolf Schenker who recalled his first trip to America from Germany in 1979. Besides learning that a young bar band called Van Halen was covering Scorpions tunes on the Hollywood club circuit, Rudy also learned to love the nightlife while partying with one of his heroes, guitarist Ritchie Blackmore of Deep Purple fame.

“When I came to Los Angeles for the first time, it was unbelievable,” Rudolf said. “We would go to the clubs, where I was running into Ritchie Blackmore, who at this time, was in the band Rainbow and was hanging around Los Angeles. We would go to these after-hours parties when the club closed and people would come screaming, ‘Oh my God!’ I thought they wanted Ritchie’s autograph, but they come to me! I guess they were used to seeing him around Los Angeles. Ritchie Blackmore, from my point of view, was much bigger than the Scorpions, but all these people come to me for an autograph. This was my first impression of America! It was pure rock-n-roll!”

For the published Scorpions interview and more about Ratt, go here.