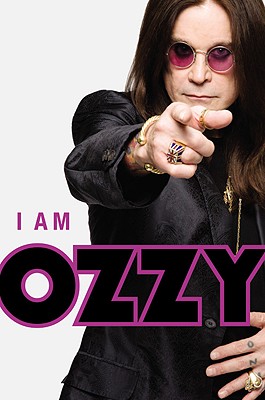 Been rolling on the floor trying not to pee myself while finishing Ozzy’s autobiography, “I Am Ozzy” (is that a title or a reminder?). This book is laugh-out-loud hilarious and a must-read for even geeks like myself who thought they knew all there is to know about the heavy metal madman.

Yes, the lunacy of Alamo pissing, bat and dove biting, wife strangling and decades of self-abuse are all re-told for the billionth time, but they’re recounted here in such concise, vivid and humorous fashion they hardly seem ho-hum. Then again, how the hell could they?

Surely a great deal of credit must go to Ozzy’s co-writer, Chris Ayres for keeping the read well-paced and articulate. The humor and madness, on the other hand, could only come from Ozzy — and there’s more here than you might imagine. The stories of touring with Motley Crue are as insane as they are debauched (go buy the book!). Same goes for Ozzy’s wake-and-get-wasted existence, which for more than four decades and 300-some pages, became more routine than brushing his teeth.

For all its bodily fluids, blackouts and shooting sprees aimed at household pets, there are somber sides to Ozzy’s life story (made even more so by his constant self-sedation). We learn that Ozzy struggled with the kinds of conflicting adult emotions that come from divorce (from his first wife, Thelma), death (the Randy Rhoads plane crash and the passing of his parents), the birth of his children, the on-again, off-again brotherhood of Black Sabbath and wife Sharon’s struggle with cancer (to say nothing of the volatile relationship with her iron-fisted and often pig-headed father, Don Arden). There also was the draining (and ultimately failed) lawsuit alleging Ozzy’s influence in the suicide deaths of two fans.

Perhaps the biggest take-away, however, is the culture clash we all tend to forget. Ozzy is not some manufactured Hollywood lunatic set forth on this Earth to piss off your parents (although he did a damn fine job of that!). Being a drunken pariah and singing about demons and war was not exactly a career path to fame in the early 1970s (although later acts like Marilyn Manson and Rob Zombie would ride Ozzy’s trail to the bank). Like it or not, Ozzy’s public persona was, and remains, an extension of a restless child with no future and a stunted (at best) understanding of acceptable public boundaries (assigning blame is now a moot point).

As the book reveals, Ozzy was a poor kid (with three siblings) from Britain who pursued music as an escape from a life of boredom, crime and a dead-end job (pun intended) spent mopping guts at the local slaughterhouse. Lovely, eh? Music may have been Ozzy’s fantasy escape, but there honestly was no reason to believe a band like Black Sabbath would gain any commercial success and turn a social misfit like Ozzy into a world famous rock star.

If you grew up in a neighborhood still wrecked from World War II and had to piss in a bucket when Mother Nature yelled, you would probably ride the pleasure train to insanity, too. If you couldn’t behave on your neighborhood street corner, then how are you going to act when you’re suddenly jetting to America where newfound stardom affords such luxuries as pizza(!) and air-conditioning(!) let alone groupies and cocaine (thanks to Leslie West, according to Ozzy).

Ozzy doesn’t use this reality as an excuse for his addictive, lawless behavior. Instead, he freely admits to going mental when booze, chicks and dope dealers beckoned from every corner. Let’s face it: If you pluck a kid from a bleak existence and put him at the gates of Disneyland, he’s gonna ride all the rides until every last wheel falls off!

Ozzy claims to be in much better mental and physical health these days (how could it get any worse?), which is a relative evaluation. Still, the fact that he’s not taking a cozy dirt nap is nothing short of a miracle. Like other books of this kind, Ozzy’s crazy trainwreck serves as entertainment because we get to watch from the safety of the sidelines. Ozzy, of course, is a wealth of comedic madness. Couple that with deft editing and you’ve got a wild ride. Buy Ozzy’s book and hang on tight!

PS. Speaking of rock books, I’ve read some good ones lately. Obviously, Motley Crue cornered the market with “The Dirt” (sorry Led Zep) and Sixx told a skin-crawling tale of shotgun-hugging, smacked-out paranoia with “The Heroin Diaries,” but I’ve recently been surprised by a few others that make me question how the authors remain among the living.  “Scar Tissue” by Red Hot Chili Peppers singer Anthony Kiedis has drugs on every page and treads dangerously close to “The Dirt.” Likewise, “Hit Hard” by Aerosmith drummer Joey Kramer is a roller coaster in its own right as it recalls decades of partying (and fighting) with no less than the Toxic Twins fer chrissakes!!! These titles have been available for a while, but worth recommending again. Read at your own risk.