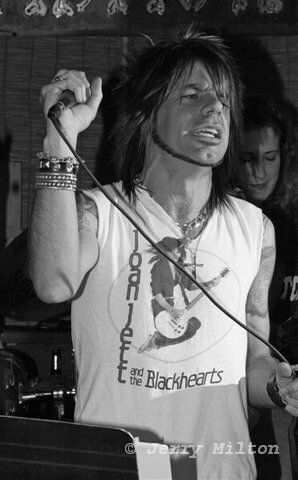 Here’s a photo I like to call “Don’t Quit Your Day Job.” The shot was taken by Jerry Milton circa 2005 (?) at Headhunter’s in Austin, which has long been one of my regular haunts.

On this night, a live band was playing karaoke requests behind shameless and willing wannabes such as myself. After a couple beers and merciless prodding by my “friends,” I took the stage and turned blue in the face while taking a stab at Guns N’ Roses’ “Sweet Child O’ Mine.” Or was it Skid Row’s “18 and Life”? Maybe it was both (poor crowd).

Regardless, me and my sideburns (yikes!) picked a 1980s shrieker that no amateur should dare. My thinking was that if I picked a song that was lyrically familiar, I could at least put on a show if I wasn’t held hostage by the teleprompter. The jury ran away screaming.

Actually, I remember getting a round of applause, pats on the back and an offer to start a band (huh?). Ya gotta love a lubricated audience.