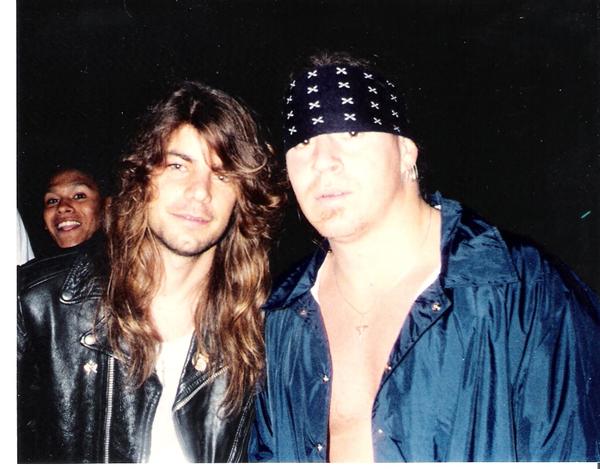 Al Kelly gets dizzy with Scythe (Photo by David Glessner)

The 1991 photo above was taken behind the Cameo Theater in downtown San Antonio by my lifelong buddy Al Kelly who had just thrown up a few moments earlier. Nice shot, Al!

The tough guy in the bandana is Suicidal Tendencies singer Mike Muir. The not-so-tough guy on the left is 2Fast2Die. The parrot on my shoulder is that typical clown who always appears when a camera takes aim.
On this night, “Psycho Mike-O” was taking a break from Suicidal and singing in his side band, Infectious Grooves. The Groovy bass player this evening was crab-walking Robert Trujillo who you may remember from his previous stints in Suicidal, Ozzy and now Metallica.
Al and I were joined at the hip during this time and saw countless gigs together, including his own as the bass player in San Antonio metal upstarts, 4th Ryke and Scythe (2Fast2Die was a “roadie”).

The details related to the top photo are sketchy (see first paragraph), but at least the picture is in focus. Not bad for a guy who just hurled his (liquid) dinner! Thanks, Al.
Categories: Features, Photos & MemoriesBy Metal DaveSeptember 2, 20101 Comment
Tags: cameo theaterinfectious groovesmetallicamike muirrobert trujillosuicidal tendencies