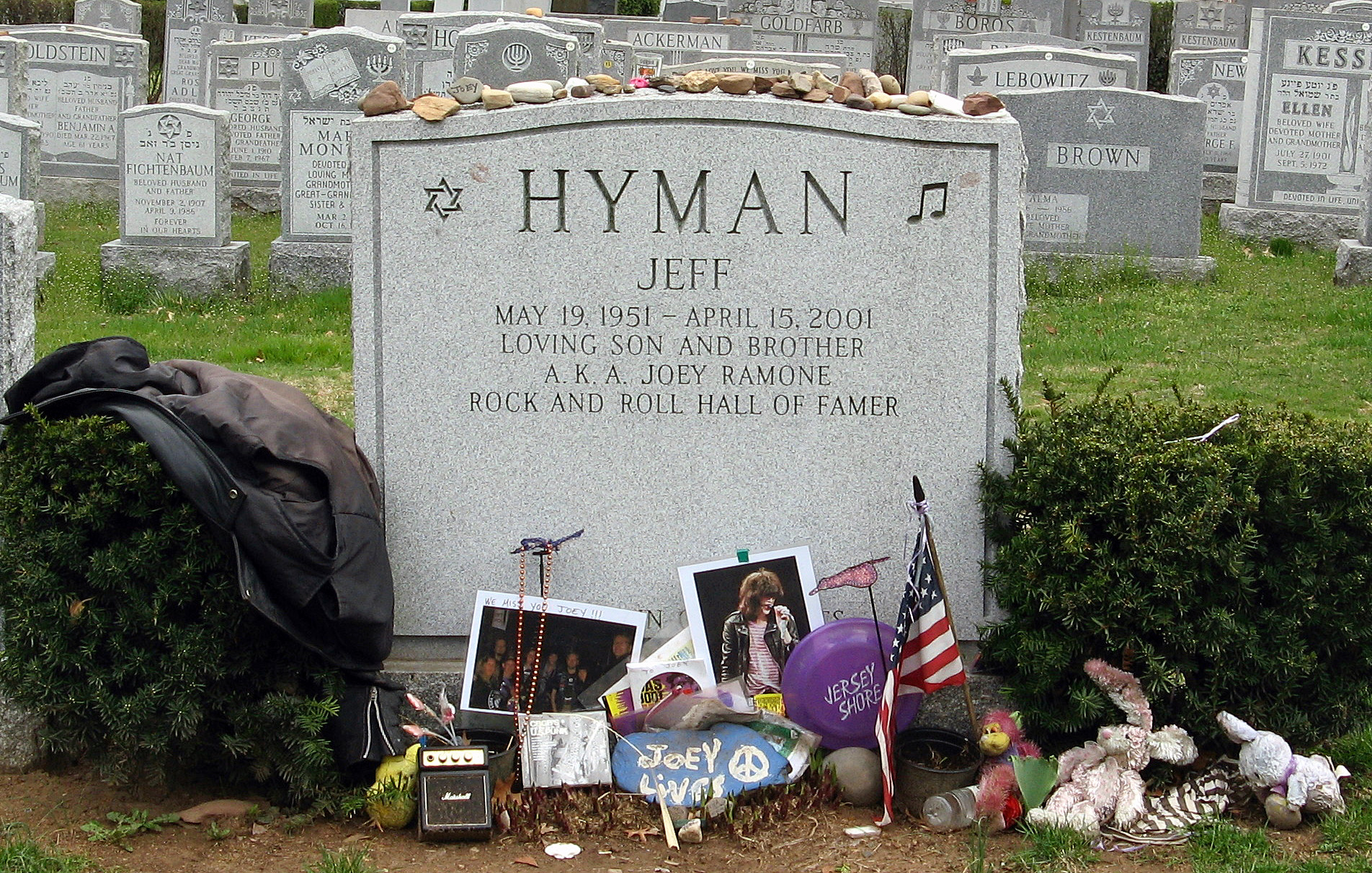 DON’T WORRY ‘BOUT ME: Anchored as always by his tree-tall mic stand, Joey was the slouchy centerpiece of the Ramones’ blitzkrieg bop.

I wrote for Metal Edge magazine for about five years circa 2000-2005. This tribute to Joey Ramone was one of my proudest moments during that time (in sentiment, if not the writing). I tried to recreate the page as it appeared in Metal Edge, but couldn’t find the proper photo (right) any larger than you see here. The other photos are additional. This tribute appeared in the Aug. 2001 edition of Metal Edge. Enjoy …

On April 15, 2001, the heart-wrenching news of Joey Ramone’s death flashed across the television like the cruelest of sound bites. To me, Joey was more than the leader of the Ramones; he was the singer on the soundtrack to some of the happiest times of my life. At 49, with hardly a warning, Joey was gone, a victim of the lymphoma he had been quietly battling for years.

Born Jeffry Hyman on May 19, 1951, the future Joey Ramone was the unlikeliest of rock stars. Hiding behind tinted glasses that were hiding behind a thicket of hair, the gangly 6’4” singer’s battered leather jacket, shredded denim jeans and blown-out sneakers were enough to make a hobo wince. While other rock stars of the ’70s bragged of sexual conquests and heroic journeys to faraway lands, Joey sang of puppy love at the Burger King and journeys to the local 7-11. His voice was a pleading croon instead of a Tarzan-style mating call, and his stage moves were downright arthritic compared to the shirtless gyrating that filled arenas with panty-tossing nymphs. Joey Ramone was not Robert Plant – and that was precisely the point. 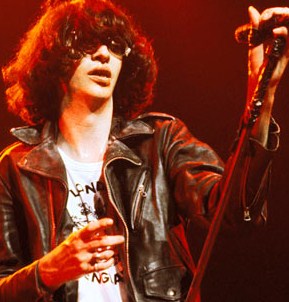 Formed in Forest Hills, NY in 1974, the Ramones were clueless hooligans compared to formally trained, self-indulgent poofs like Led Zeppelin, Fleetwood Mac and the Eagles. Where those bands separated songs with look-at-me guitar and drum solos, the Ramones barely caught their breath before a shouted count of “1-2-3-4” lit the fuse on another two-minute burst of deadpan, comic-book hilarity punctuated with words like “wanna,” “gonna” and “gimme.” Their turbo-charged simplicity once prompted a music-biz type to dismiss them as “three chords and four leather jackets.” Still another claimed he would have walked out on their audition, but the Ramones were finished before he could stand up. 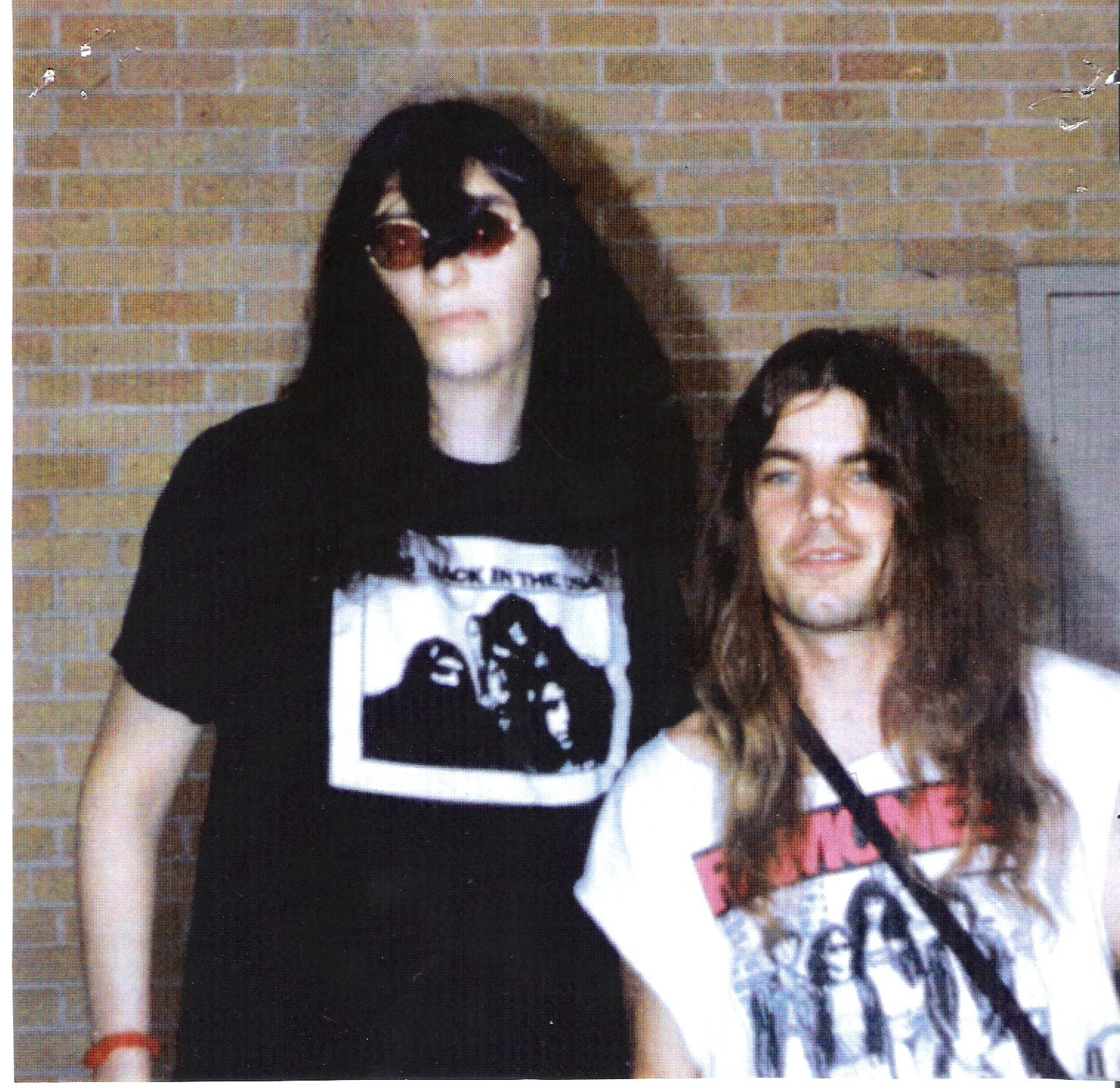 The Ramones’ untrained musical attack and unwashed appearance was a slap in the face of virtuosos like Eric Clapton and Steve Howe, which of course, was the equivalent of the schoolyard geek kicking the shit out of the varsity quarterback. The ensuing dogpile consisted of future members of the Sex Pistols, the Clash, Billy Idol and such current coattail surfers as Green Day, the Offspring and Blink-182. But it didn’t stop with three-chord, Dennis the Menace-type punks. From murderous metal hardasses like Slayer and Motorhead – who paid the ultimate tribute with the song “R.A.M.O.N.E.S.” on their “1916” album – to glam-metal sleazebags like Guns N’Roses and Skid Row, and grunge kings Nirvana and Soundgarden, if it had an electric guitar and outcast attitude, it owed a debt to the Ramones. Sadly, some debts are never repaid, which is painfully obvious considering the Ramones’ 22-year career with no Top 40 single and only one gold record.

Regardless, the Ramones’ legacy as punk-rock pioneers and their transcendent influence are too tough to die. If the Ramones could do it, anyone could do it … but nobody could do it better.

Adios, Joey, we’ll see you in the Rock-N-Roll Hall of Fame.