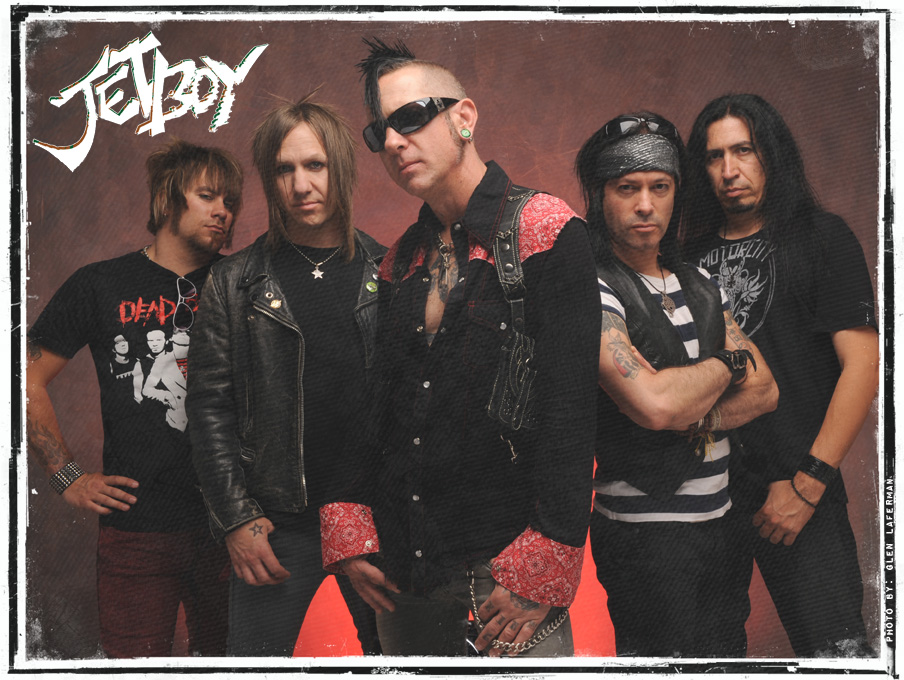 Got an email from guitarist Billy Rowe informing me that his band JETBOY plugs in at the Midwest Rockfest this Saturday, July 24, in Wichita, Kansas. JETBOY, you may recall, once ruled the mid-‘80s Hollywood club scene alongside Poison and Guns N’ Roses until record industry politics spiraled the band into turmoil and obscurity (c’mon, you remember “Feel the Shake,” right?). JETBOY’s other dubious distinction was bassist Todd Crew who was fired from the band due to his drinking and drugging. Crew subsequently went to work as a roadie for Guns N’ Roses and his ultimate death stirred some bad blood between JETBOY and GN’R.

Billy’s email sent me digging through the archives for my JETBOY interview that published in Classic Rock magazine a few years back as the San Francisco glam-punks began staging a comeback. You’ll find excerpts below. Meanwhile, if you’re passing through Kansas this weekend take a skid into the Midwest Rockfest. The three day festival includes performances by Twisted Sister, Y&T, KIX, Styx, Drowning Pool, Fuel, Buckcherry and more! JETBOY hits the main stage at 2 p.m. Saturday, July 24.

On being weird in the pre-Marilyn Manson rock scene: “I think we were a little ahead of the times and a bit outside of the industry mold,” says JETBOY’S atomic-punk singer Mickey Finn. “I remember our manager telling us we could be huge like Van Halen and I thought she was fucking crazy. I mean, I was wearing my girlfriend’s torn lingerie and shopping at women’s shoe stores with a huge Mohawk on top of my head! (The Mohawk) drew good and bad attention, and it confused a lot of people, but it definitely became my trademark and is probably the first thing people think of when you mention the name JETBOY.”

On Paul Stanley’s early interest in producing JETBOY: “I remember this so well, because I’m a huge KISS fan,” Rowe said. “Paul had met with Poison and I guess he was seeing this new rock scene blow up and wanted to get into producing. We were rehearsing at SIR rehearsal studios on Santa Monica Boulevard in Hollywood and Paul came down to check us out. He walked in wearing jeans, a tweed sports coat and penny loafers. The first words out of his mouth were, ‘Cool guitar,’ which was my first hollow-body Gibson ES 175.”

On the death of Todd Crew who was immortalized on MTV by Guns N’ Roses during the live “Knockin’ on Heaven’s Door” video: “I loved Todd,” says Finn. “He brought me into JETBOY. We’d get high together, but I felt like I always knew when to stop. Call it common sense or call it fear, but he didn’t have it. None of the other guys in JETBOY did the kind of shit we did. Me and Todd used to whack coke, dope, you name it. Throw it on the table and it was on!”

On landing Hanoi Rocks bassist Sami Yaffa as Crew’s replacement: “I remember right after Sam joined the band, Michael Monroe came to visit and we had a pool party at our apartment,” Rowe says. “He stood on the roof of the place and leaped into the pool and all I could think was, ‘Shit, we’re all gonna see Michael Monroe of Hanoi Rocks kill himself jumping into a swimming pool!’”