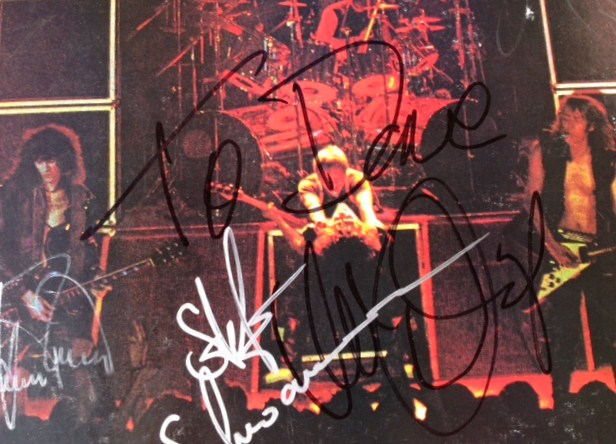 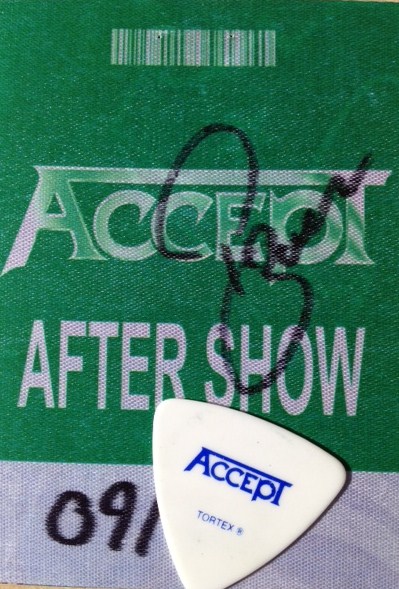 PERFECTLY ACCEPTABLE: The evening’s bright spot came courtesy of bassist Peter Baltes who gave me a pick and signed the after-show pass provided by my buddy, J.Rab.

I’ve been told my avalanche of rock-n-roll memorabilia could land me on an episode of “Hoarders.” While that’s probably an overstatement (maybe?) from an audience of more-casual music listeners, I’m certainly guilty of clinging to KISS posters I’ve owned for 35 years (and, no, they’re not stored in a box in the attic; they’re actually staring at me from the walls at this very moment).

From autographed albums and prized leather jackets to backstage photos and VIP passes, my full-circle journey from fan to music journalist has been rich with rock-n-roll rewards. It’s also been tarnished by some crushing disappointments.

As any fanatic will tell you, the value of any collection is measured by firsthand interaction and authenticity. And therein lies my dilemma. How do you hang out backstage, or otherwise meet a band, and ask only the original guitarist for an autograph while the substitute drummer is standing right there? Actually, the better question is: What gives said drummer the right? Much like we fans are expected to “be cool” when invited into our heroes’ space, so too, should they respect our fandom before intercepting and autographing an album they didn’t play on. Picky, I suppose, but with all due respect to, say, Sammy Hagar, for example, why would I want his autograph on my copy of “Van Halen II”? I realize that’s an extreme hypothetical, but it illustrates my point. 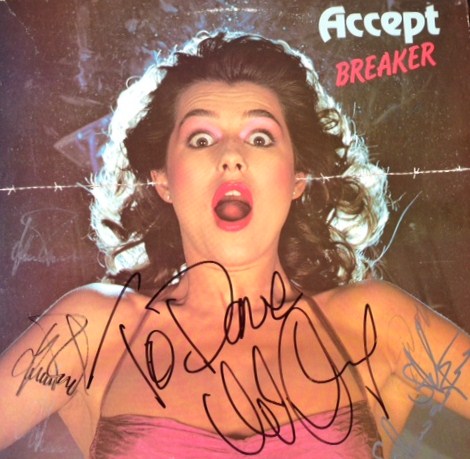 BROKEN: Three genuine signatures came at the cost of two players who didn’t appear on this album.

So, on Sept. 30, 2012, I went to see German heavy metal band Accept in Austin. In my possession that evening were two of the band’s most-loved albums, “Breaker” and “Restless & Wild.”

As if these albums could be any more important to me (especially the latter), they also were brandished with the pristine autograph of legendary and somewhat elusive Accept singer, Udo Dirkschneider, who had signed them for me years earlier during an interview on his (solo) tour bus. Real gems, I tell ya! Any heavy metal maniac will readily agree those babies were enviable collector’s items. I say “were” for good reason. 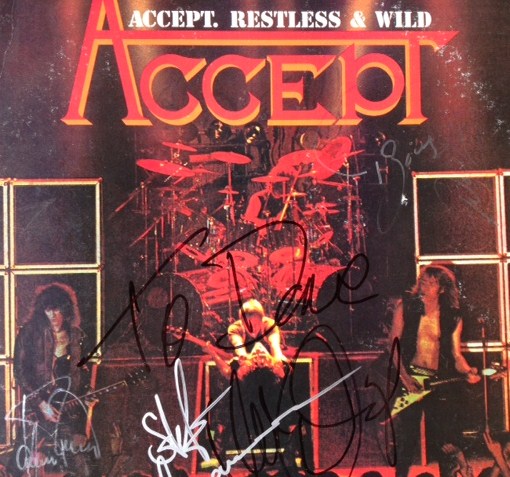 TARNISHED SILVER: The heart-wrenching, silver signature at the scene of the crime.

Excited at the possibility of finally having Udo’s autograph joined by those of Accept bassist Peter Baltes, and guitarists Wolf Hoffman and Herman Frank, I dutifully lugged the album covers (yes, ALBUM covers) to the gig. After a great show (thanks for the guest spot, “Tiny”!) , I embarked on my mission and soon found Baltes. Scribble and a handshake? Thank you, sir. Done!

Next, I found Frank and Hoffman in the parking lot. As they signed and passed my albums to each other, I cringed as the mix-up resulted in Frank adding his signature to “Breaker,” which actually featured Jorg Fischer on second guitar. Ugh! Honest mistake, I suppose. I’ll take a fraction of the blame.

THAT mishap was a paper cut compared to the gutting I took at the hands of substitute drummer Stefan “O.J.” Schwarzmann. Somewhere in the conversation and confusion, Schwarzmann appeared and took it upon himself to snatch the albums from his band mates and leave his mark on both. WTF??!!! Making matters worse was the fact that he had the best Sharpie while the others were low on ink. The result? Schwarzmann’s autograph not only sprawls across Udo’s (blasphemy!), but also is blazing bright in all its metallic-silver glory on albums he never played on!!! Agggghhhhh!!!!!!! I nearly fell to my knees in agony. 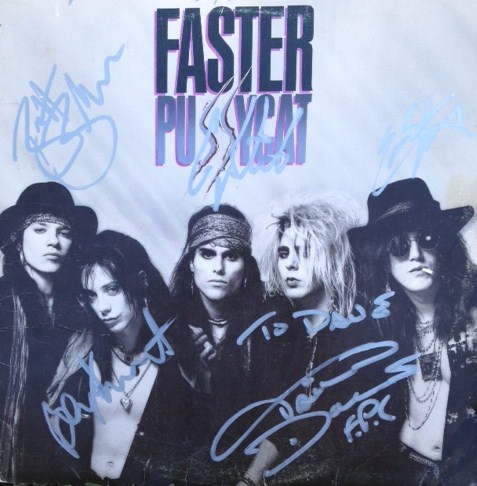 SCRIBBLIN’ ON AND ON: The signature at upper left belongs to Brett Bradshaw, but the face on the album belongs to Mark Michals who, unfortunately, was doing time for heroin possession.

I’ve had this happen in the past at various record store meet-and-greets, but in hindsight, those episodes were unavoidable (or at least to be expected). In those days, I was a rookie collector and not as selective as I am today. In the cattle-call, assembly-line format of a record-store meet-and-greet, the band members are basically on autopilot and signing anything that passes in front of them. This explains why my precious “Faster Pussycat” album bears the autograph of substitute drummer Brett Bradshaw and why my Alice Cooper “From the Inside” features a cast of characters who never played on the album — including Kip Winger! 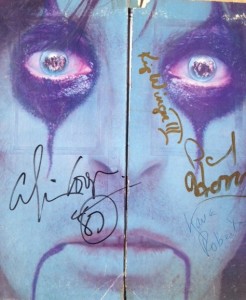 WHEN I WAS GREEN: In 1987, I met Alice Cooper and made the mistake of allowing his then-current band to sign an album they didn’t play on. Kip Winger is in gold ink near Alice’s eye. While not the authentic lineup, I think I’m OK with this one.

The lesson? If you only want select autographs, then have enough spine to immediately retrieve your treasure after it’s signed rather than allowing it to make the rounds. Most band guys/girls are well-meaning when they sign (and in all honesty, I’m sure Schwarzmann meant no harm), but they also should have the decency to double-check permission before defiling something they KNOW they never played on.

Oh, and for the record (yes, pun intended) my objective in seeking an autograph is never monetary gain. In fact, whenever possible, I almost always ask that the signature be personalized with a “To Dave …” Schwarzmann wouldn’t know this, because he never asked my name. Bastard! I guess some treasures are better left at home. The End.