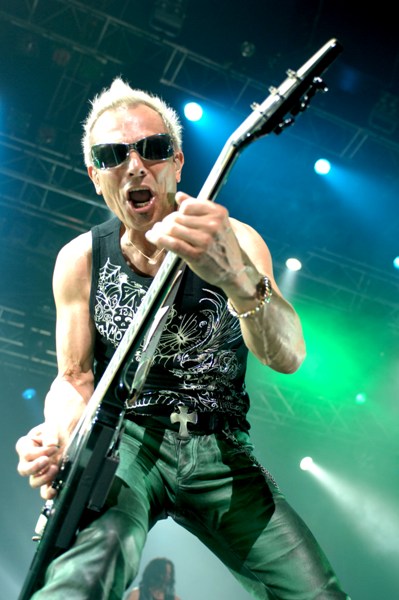 Got welcome word today that Scorpions guitarist Rudolf Schenker will be calling this weekend for an interview. Hard to believe it’s been 11 years since I last spoke to the Flying V killer. As you should know, the band is on its final farewell tour in support of new album “Sting in the Tail.” The album is a great swan song and highly recommended for fans of the band’s mid-80s output.

Buy your tickets for one last sting and expect a lethal dose of classic tunes delivered in dynamite fashion (Klaus and Co. never disappoint). Meanwhile, here’s a couple teasers from my 1999 interview with Rudolf.

“There were 70,000 people at our first American show,” Schenker said recalling the German band’s first foray to America where the Scorps opened a stadium show in Cleveland featuring  Ted Nugent, Aerosmith, Journey, AC/DC and Thin Lizzy. “Our first impression was, ‘This country is rock ‘n’ roll.’ We went around the United States in a tour bus and since we were opening, we only played 40 minutes and spent the rest of the time laying around the swimming pool.”

Regarding his brother Michael Schenker who helped found the fledgling Scorpions before being lured away by the more established band UFO and becoming a guitar legend, Rudy revealed:

“We were on tour supporting UFO and their guitarist at the time, Bernie Marsden, didn’t make it to a gig because he forgot his passport. UFO asked to borrow Michael. They liked him so much, they asked him to join the band. He was 16 or 17 and I didn’t try to convince him to stay because he was already very, very good and I could tell he could have a big, worldwide career.”